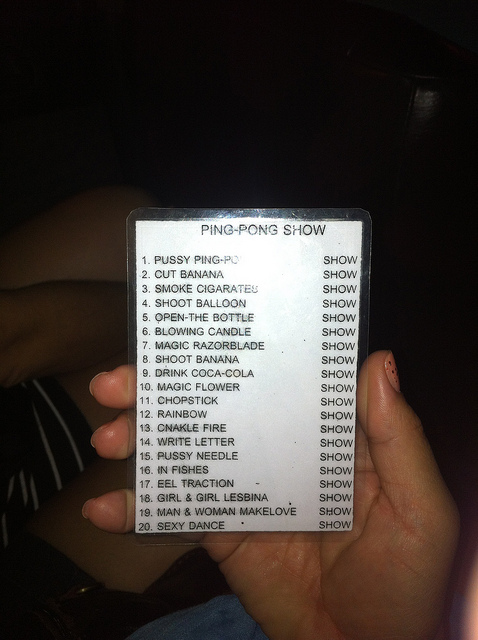 What Vegas is to forty-five-year-old businessmen with cul-de-sac hairlines and cocaine-ravaged septums Bangkok is to twenty-five-year-old backpackers with sun-kissed skin and alcohol-soaked livers (and cocaine-ravaged septums if they’ve traveled through Latin America). The same rules apply: what happens in Bangkok, stays in Bangkok… unless you were threatened by a blow-dart-wielding vagina, in which case you write an article about it.

It was my best friend Sara’s and my last night in Thailand. After an afternoon of t-shirt shopping and six-dollar massages, we were gorging ourselves on rich coconut curry when the plum-shaped woman at the adjacent table said, “Excuse me, is that any good? My husband and I just got in today and we have no idea what to order.”

Ah, newbies. So eager and clean and pale. We started chatting with them—Amanda and Brody from California—and dinner soon became drinks. Amanda was appalled at the notion of Thailand’s notorious cocktail buckets but Brody was quick to compensate, draining the pails as if he were drinking for them both. Along the line, we picked up Trevor: an ex-Mormon from Utah who was both wary of a lifestyle he’d been warned against since childhood yet keen to make up for lost time. By midnight, we were all hammered, skipping and lurching down Khao San Road amidst touts that hawked everything under the moon.

“It’s kind of like a strip-show,” explained Sara. “Except instead of dancing around a pole, they shoot ping-pong balls out of their, ah, vajunes.”

“That’s disgusting!” shrieked Amanda at the exact instant that her husband cried, “We are so going!”

She crossed her arms indignantly and he suggested it be put to a vote. “All in favor of the ping-pong show?”

Brody, Sara, Trevor, the taxi driver and I all raised our hands. Amanda rolled her eyes but fair was fair and so we piled into the cab. The drive turned out to be much longer expected, however, and when we stopped it was on a dark street with no other tourists in sight.

“This isn’t the backpacker district,” said Sara. “Where are we?”

We were in front of a squat building, black except for the red light illuminating the entrance. A bouncer stood in the shadows, smoking a cigarette.

“Eight hundred baht,” he said when we approached the door. “Each.”

“Eight hundred? Holy smokes!” cried Trevor. “I got pad-thai from a street vendor for thirty.”

“Don’t worry, it’s on me,” slurred Brody as he pulled a wad of money out of his shorts.

“Do you remember the exchange rate?” his wife hissed as he handed over a messy stack of bills. The bouncer counted them quickly, then nodded and let us pass.

We followed a corridor and went downstairs to a small room with plastic tables and a brass pole on a stage. Balloons hung from the ceiling as if leftover from a kid’s birthday party. The light was blue, making us resemble corpses waiting to be autopsied. To make matters even more awkward, we were the only patrons there.

“Drink?” A tired-looking waiter in a wrinkled suit appeared behind us.

“What time does the show start?” asked Brody.

“Show start when you buy drink,” said the waiter.

Trevor, Sara and I exchanged glances. Eight hundred baht and we still had to buy alcohol? I opened my mouth to protest but Brody produced yet another handful of crumpled cash. “Buckets for everyone!” he exclaimed, then caught sight of Amanda’s murderous scowl. “Uh, and a one-ounce cocktail for my better half.”

The waiter left to fetch our order and the music started. A girl that could’ve been anywhere from eighteen to forty took to the stage wearing nothing but glitter. With an under-whelmed expression, she wasted no time in sitting down, spreading her legs, and sticking a ping-pong ball where no ping-pong ball should ever be stuck.

“I wonder what happens if she accidentally sucks instead of blows,” I asked no one in particular.

There as a pregnant pause and then an almost comical pop! The little ball soared through the air before bouncing off the rim of Amanda’s glass and rolling off the table and out of sight.

“Wooooo!” Brody was on his feet, clapping and whistling as if she’d just scored a touchdown. “That was incredible! Wasn’t it, babe?”

With one finger, Amanda pushed the glass as far away from her as possible and glared at her husband. Meanwhile, the performer climbed off the stage and walked over to us holding an empty cup. “Tip,” she said in a voice that made me suspect it was the only English she knew.

“You’ve got to be kidding,” said Trevor.

“Tip,” she repeated, and because she looked so despondent we all reached into our pockets and procured what we could—except for Brody, that is, who when fishing for money discovered that he’d spent it all.

A second girl came to the stage. This one was younger (or at least shorter) and without any pretenses of even disinterested apathy. She looked downright miserable, and it was soon apparent why. Her trick was to reach into her vajune and—as we drew a collective gasp—slowly pull out a string of razor-blades. To demonstrate that they weren’t imitations, she held up a folded napkin and cut it into a snowflake.

“I was going to decorate our Christmas tree with snowflakes like that!” Amanda recoiled in horror.

“Aw, babe, don’t cut up your pussy. You know that’s my favorite part of you,” said Brody. Sara face-palmed.

This girl also had a cup. “Tip.” And after we’d raided our wallets: “More tip.”

“More tip!” she insisted, and he sighed guiltily as he handed over the rest of his baht.

While the two girls sat off to the side, a third came onstage in what would turn out to be a very literal triple threat. With the irritated affectation of somebody who wants to check their text messages but can’t, she took the same position as the ping-pong champion. However, instead of a ball, she slipped a little dart inside herself. Then, she held a short piece of hollow bamboo up to her crotch, adjusted her pelvis and—in one fell swoop that defied everything I knew about both physics and vaginas—launched the dart across the room and popped one of the balloons.

This time, Brody wasn’t the only one cheering.

The music changed and the shorter girl began circling the pole in a manner that was less that of a sultry stripper and more that of a lonely girl at recess who’d lost her tether ball. Meanwhile, the ping-pong champion approached us once again. I thought she was going to request more money but instead she climbed onto the table, inserted another ball and gestured for Brody to open his mouth.

Thwunk. It was a hole-in-one.

Want to get mortified? Enjoy a few scary travel stories!

“Jesus fucking Christ!” Amanda leaped to her feet and boxed her husband in the ear. “What the fuck, Brody?! You just caught fucking AIDS!”

“It’s actually very unlikely for AIDS to be contracted orally—” I elbowed Sara in the ribs and she shut up.

“Tip!” echoed the woman with the bamboo tube, and I could tell by her tone that she had no patience for our shenanigans. The girl on the pole burst into silent tears.

But Amanda had her own problems and was not empathetic. “You whores aren’t getting another cent out of us!” she screamed. “This place has already cost me an arm and a leg and a motherfucking marriage!”

“You mad, babe?” Brody muffled with the ping-pong ball still in his mouth.

The woman with the bamboo tube narrowed her eyes and loaded another dart. This time, though, she aimed her weapon directly at Trevor’s face. “Tip!” she spat menacingly. “Money, falang!”

“GAHH! NINJA PUSSY BLOW-DART!” Trevor ducked his head between his knees and shielded himself with his arms. “Call security!”

At the mention of “security,” the waiter and the bouncer stormed in. There was a lot of rapid Thai as the music scratched and cut and the house-lights flooded the room.

“Show over! Everybody out!” the waiter yelled, and we scrambled to leave before somebody lost an eye.

As Amanda ran off sobbing and Brody staggered after her, Trevor, Sara, and I hailed a tuk-tuk.

I shook my head. “That was without a doubt one of the fucked up experiences I’ve ever had.”

We paired S. Bedford's story with a yummy recipe inspired by the tale. Go to the next level & eat where S. Bedford been...wait, that sounds a bit off. But you know what I mean! Bon Appetit. 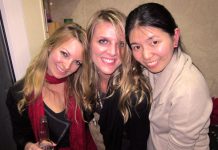 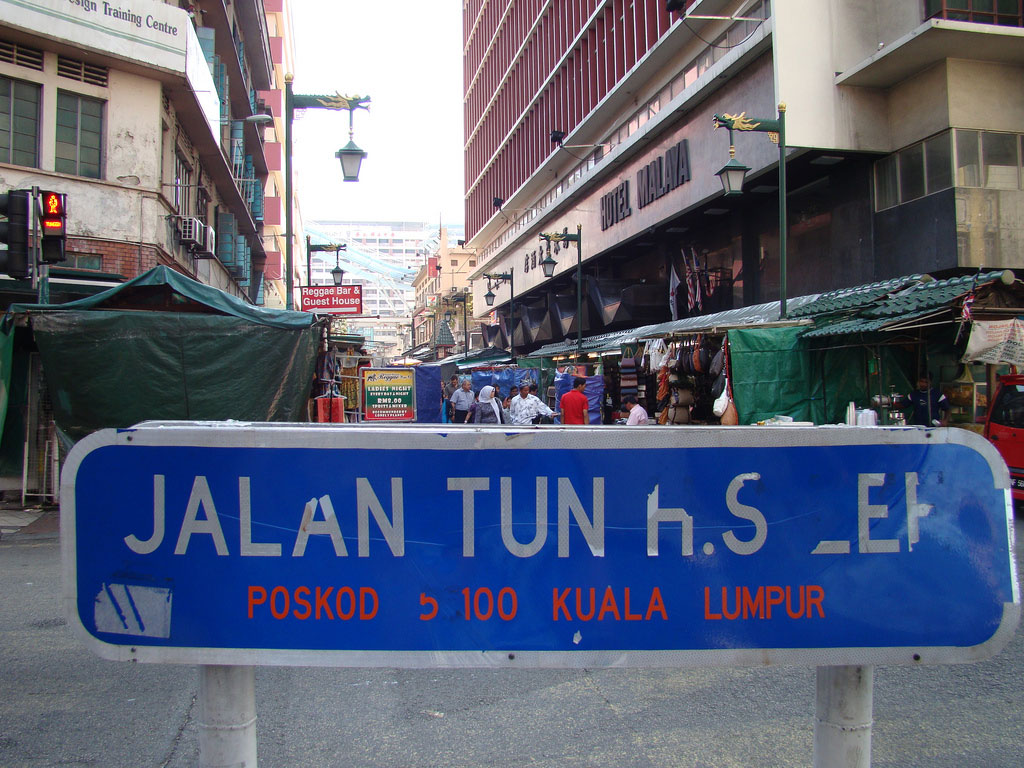