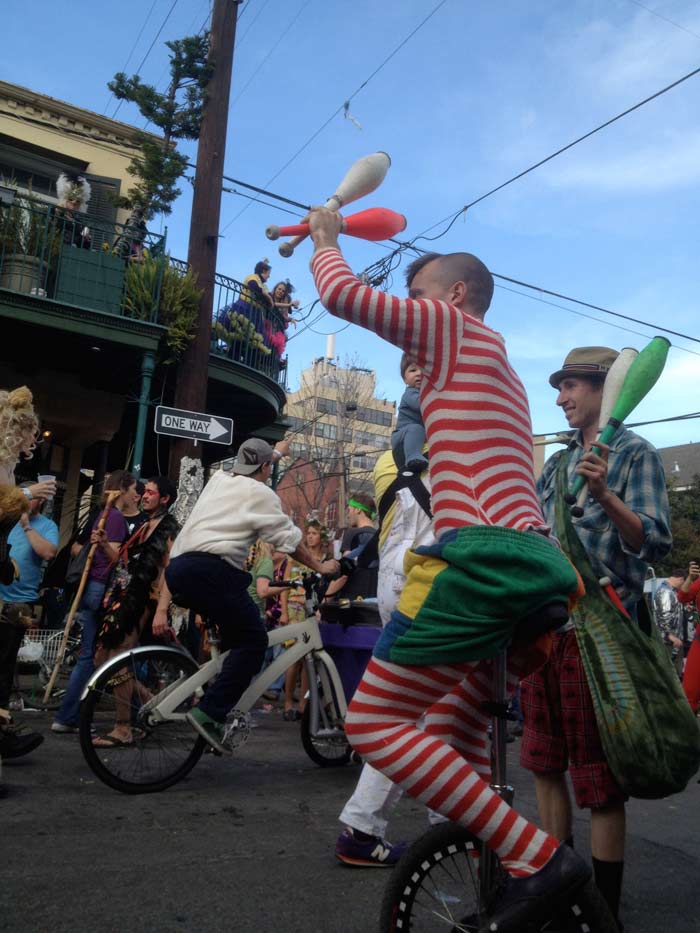 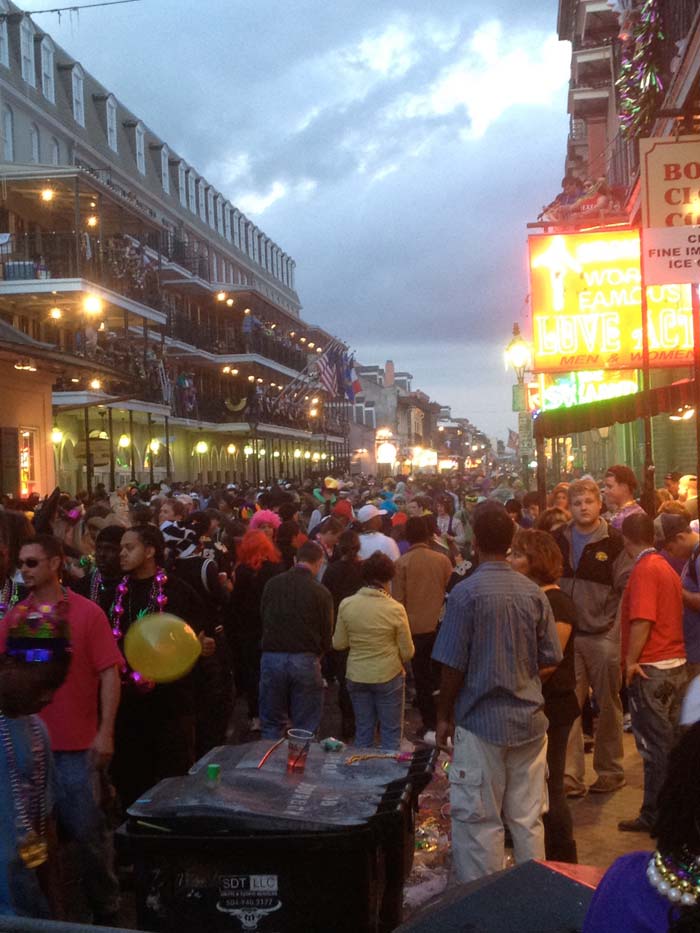 DISCLAIMER: Story is NOT for the faint of heart or for those with an aversion to bathroom bloopers.

For a little more than one month out of the year, drinkers of all calibers come to the Sin City of the south to get trashed in the streets, litter its sewers with decorative beads and flash various body parts in public. In New Orleans, the Mardi Gras festival starts in early January and doesn’t end until Fat Tuesday, which is around the 15th of February. In between that time, there is a parade nearly every day and unless you download an app to your smartphone or it’s nearly impossible to tell which neighborhood streets are going to have a parade going through it. I had spent the afternoon riding in a children’s parade since I had a folding bicycle. If you’ve never seen a folding bike, a normal-sized woman looks like a giant riding. I am 6’3 and 220lbs, everyone thought I was part of the show and a cop gave me a high five.

Since I was traveling of legal drinking age and traveling the American landscape alone in a conversion van, it seemed like the place to be in mid-January. However, after the sixth parade you come to terms with something. Parades are fucking boring. It’s a hierarchy of the haves and have-nots where poor people beg, flash and fight over shiny pieces of plastic while the cool kids get to ride in the float. Being resourceful, I spent two minutes picking loose beads off the ground. Earlier in the day,

With Mardi Gras proper attire (beads), it was time to hit the casino. Harrah’s is like any other casino in America. The cheap tables are crowded and those with a $10 minimum were empty. Feeling like I had some how cheated the system with the bead scrounging, it was time to try my luck at the tables.

“Would you like a drink, sir?” cooed a sexy cocktail waitress.

The cocktail waitress walks away and I never get my drink. However, it didn’t deter me from putting a hefty $20 bet on Wesley Snipes at the Roulette Table (get it?). The Roulette ball landed on 33 Black, and I walked out $20 richer, so it was time to hit the town. On the Northeast side of the casino, there’s a long strip of road that sells nothing but hot sauce, pralines, goofy t-shirts and canned beer. With two cans of beer in my system, I ducked off the main road into a cozy tavern and asked the bartenders which way I should go.

In New Orleans, even the locals will scoot their barstools up the mahogany on Bourbon Street, so it’s hard to get the answer you’re looking for if you want to avoid the rest of the tourist crowd. Eventually, a rockabilly girl with sleeved tattoos points me toward the warehouse district.

A wobbly bike ride over the to hippest part of town and I’m home. I immediately make friends with some carnival types who are juggling bowling pins and spitting fire. With a grumbling stomach they point me to a restaurant, El Gato Negro, and told me to order the biggest, baddest burrito they had, with extra everything. After dominating the $10 burrito, I stayed around that part of town, which in a frenzy of its own. Open house parties and art shows with free liquor seemed to be around every corner. I played checkers with a model who gave me a fake number. Everything was going awesome!

By 2am, I decided to head back the van. I had parked in three miles away in the Garden District, which seemed like an impossible trek with a mini-bicycle and double vision. However, with only a few wrong turns I had found my van. Parked neatly on the street in between two magnificent mansions. The trick to keeping a low profile when living out a van is to park on the property line between two nice houses. Rich people don’t talk to their neighbors, so they usually figure it’s a guest of the other one. Plus, if you use a shade blocker and curtains, no one should ever know you’re inside.

The next morning, I woke to two things: the sounds of horns from a very-nearby parade and an uncontrollable urge to shit. I peeked outside one of my curtains and the sidewalks were packed, on both sides, with hordes of Bud Light drinking, bedazzled New Orleaners.

Clenching my cheeks, I hopped outside the van. No porto-potties in sight and the police had barricaded the street off, so I was in trapped with the mini-bike. The mere sight of the cobblestone road made it apparent that this Black Cat Burritto would not last long. Alas, I climbed back in to my van, literally sweating from stomach pains as I tried to devise a plan.

Quickly, I decided that there was no other option than to get the “job” done in my van. I fastened all the curtains and made sure the shade blocker was covering the windshield of my Dodge and then went searching through my belongings to see what will hold the inevitable splatter of burrito best. It came down to three items: A backpack, a one-gallon jug of Gatorade and my beloved cooler.

The backpack was an easy one to nix because of its obvious material flaws, but I had a hard time between the sports drink bottle and my mobile refrigerator, which was one of my most valuable possessions at the time. I convinced myself that while the one-gallon jug would hopefully hold enough dung, I probably didn’t have the coordination or balance to press the mouth of the bottle so perfectly against my sphincter that I wouldn’t poop all over my hand or worse, my van’s carpet.

With time against me, I stripped down to a T-shirt, opened up the Coleman and grabbed on to driver and passenger headrests for support. Instant relief washed over me as I expelled myself into the blue cooler, which was slowly followed by guilt as I peered out at beer drinking moms and dads who had no idea a man was pooping in a cooler feet away from their family.

After I cleaned up, closed the lid, and put on pants, it became quite clear that I had nothing to do for the afternoon. Obviously, I had a large cooler full of excrement that needed disposal, but aside from that my day was wide open.

As I mentioned, the humdrum of parades was growing tired and I needed better entertainment and with this cooler full of shit, it was a guarantee. So, I carried the cooler to an intersection that was full of pedestrians, set the cooler down and walked away briskly. Then, I stood back for the show.

Within minutes, a pack of college kids in their early 20s came up like a shit storm (no pun intended). The alpha male of the group stopped at the cooler, elbowed his buddy in a motion that could only mean “Free Beer” and opened it up to the horror. They recoiled, gagged and then ran away laughing. It was good, disgusting, cheap fun; which is what Mardi Gras is all about.

We paired Sean Bowes's story with a yummy recipe inspired by the tale. Go to the next level & eat where Sean Bowes been...wait, that sounds a bit off. But you know what I mean! Bon Appetit. 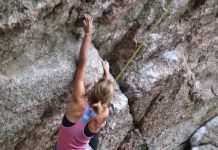 The Grace of Stones: Dancing on a Rock Face in Luskville, Quebec

Why Not? Watch A Sloth! Slothing time!!!