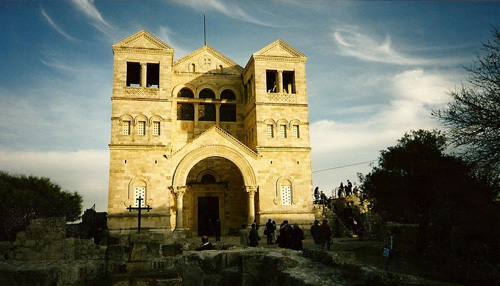 Leaving Nazareth, you reach the approach to Mount Tabor passing through the the Bedouin village of Shibli. According to Judges 4:13-16, the 1,350-foot peak was the site of the bitter battle between Sisera and Deborah and Barak. Long considered the site of Christ’s Transfiguration, Tabor stands alone in the Plain of Jezreel like an upended teacup.

[quote]across the terrace, black and very large in the mid-day sun stood a bull, eying us suspiciously, steam rising from his thick hide as he took a single step, eying us all the while as he took another…[/quote]

Atop the peak visitors find the Church of the Transfiguration, a Greek Orthodox church, and several small, hidden chapels. Today, you can hire a Mercedes taxi and cruise to the top, but when Dave Green and I visited in the spring of 1978, we chose to hike to the peak, from which you could see the Hill of Moreh, the city of Afula, Mt. Gilboa in the Jordan Valley and, across the way, the mountains of Gilead.

To walk meant that you followed the goat path through the cypress trees and pines, up the same hard scrabble ascended by 10th century BCE Israelites, the ten thousand men of Barak’s army, Jesus himself, then legions of Romans, Crusaders, as well as countless Arab and Israeli warriors of the post-partition era.

Dave and I took our morning bus from Nazareth, leaving the crowded lanes of Arab women in their black abayas and niquabs, parading along with bright orange or green Tupperware nested on their heads, up the steep hills between modern and ancient buildings chock-to-jaw, and out to the Plain of Jezreel. From the Bedouin village, the approach is tricky. You have to ask directions as often as you spot a passerby. The trek is by no means strenuous, but on a hot day–of which there are legion–you need to stop and take refuge in the shade of olive trees or verdant rows of cypress. The route scales the hillside through rugged switchbacks that progress ever upwards to flat, bright terraces of grape vines, wildgrass, and sprays of blue lupines.

We carried only water bottles in our packs and donned our kibbutz sun hats along the trail. Dave hailed from Croydon, a London suburb, but had more recently shuttled British trucks through Africa to aid businesses in the apartheid South Africa. I frequently reminded him of his sins, and he made note of mine. It had become customary for Dave and I to argue the finer points of British colonialism as it stacked up against routine American aggression around the globe. He would play his trump card: that the British were the only invaders to burn our Capitol. And I would remind him that we saved their yellow hides to end World War II.

Dave had a happy grin with a gap between his upper teeth and his eyes flashed when you mentioned his proclivity toward bedding any woman with a pulse. He had gratefully accepted the nickname “Plunger” that the other Brits on Kibbutz Ginosar had bestowed upon him. I was called “The Young Gazelle”, an ironic moniker since I was the slowest runner on the soccer pitch, laid low by a self-inflicted machete wound early one day as I attempted to chop down a banana tree.

The hike up Mount Tabor, then, was designed as a tonic, a way to put fresh life into the clicking joint of my knee. We had recently gone to the Dead Sea where the saltiest water in the world helped close the wound, for even a small insect bite in the Galilee turned into an angry infection if you left it alone. We were celebrating my good luck with the Dead See, combining a day off from labor in the Ginosar banana fields with off-the-path tourism and non-stop banter about the ills of Vietnam and India, respectively.

After the first half hour, though, I was bushed and aching. The sun burst through the clouds over the Plain of Jezreel and our blue work shirts were stained with sweat. Below you could see the winding roads toward the Galilee and, above, the terracotta towers of the Greek Orthodox church. Peacocks darted in and out of the hedgerows, filling the air with wicked shrieks.

King Sisera, Dave informed me after reading through his notes on the place, had nine hundred chariots in his forces, adorned with iron wheel-fittings. Nothing, he said, compared to his love chariot back in his hut on the kibbutz. He was wont to remind me of my poor record in getting laid. For those keeping score, it was something in the order of Dave: 28, Gabby: 0. You could count on Plunger to shift all topics to sex after he’d exhausted his prepared remarks on history. It made for a singular experience amidst far-flung settings like Bethlehem, Caesaria, Tel Aviv, Masada and, much later, South Croydon, California, Washington, and Mexico.

But on this day, the banter gave way to concern when my knee began to fail on the slopes of Mount Tabor. We were more than halfway to the peak when I gave serious thought to giving up. But Dave convinced me to try again for the next terrace, just beyond a line of junipers and through a stone Crusader gateway.

“Come on, mate, you can do it,” he said, and we labored up the next cutback, through a tangle of hedges, and burst out, finally, on the wide terrace that overlooked the valley.

I bent over, trying to catch my breath, and Dave handed me a water bottle.

“Maybe we can just stay here a little while,” I said. “Get our batteries charged.”

But there would be none of it. For across the terrace, black and very large in the mid-day sun stood a bull, eying us suspiciously, steam rising from his thick hide as he took a single step, eying us all the while as he took another, and then he broke into a tidy little trot on his undersized legs down the terrace like a twinkle-toed nightmare deftly hopping the dirt moguls en route to throttling two international interlopers.

“It’s up or down, mate,” Dave said, tossing the bottle into his day pack. “One way or the other.”

And off we ran, doubling back, my knee suddenly working perfectly, smoothly, painlessly through the contours of scrub and slippery mud-track as we descended like the mighty Canaanite troops of Hatzor, running like school kids, down to the hill country of Ephraim, past the sudden, unexpected parking lot of tour buses where Christian pilgrims embarked for their ride to the summit of Mount Tabor along a private road we had overlooked that rose effortlessly to the uppermost plateau where the Church of the Transfiguration stood against the cloudless sky, beyond the reach of bulls and sarcasm. 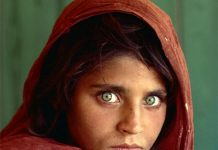 Free the Apps for World Travel