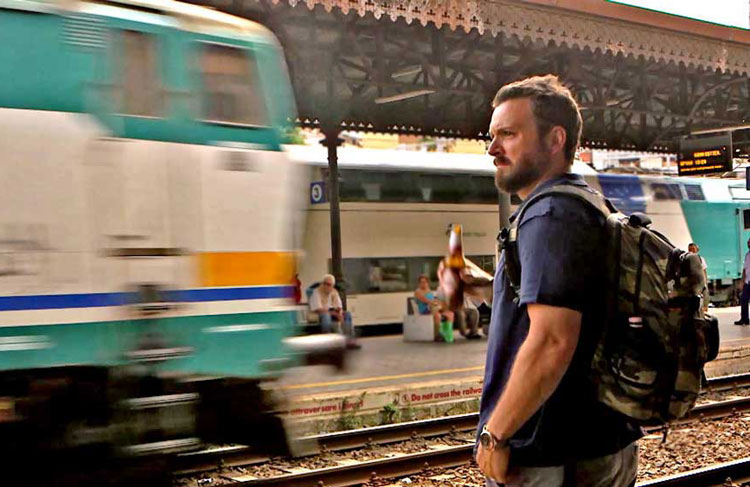 If you’re into traveling, boozing and/or meeting interesting drinking buddies, then you must know comedian / TV host Zane Lamprey – ambassador of encountering hootch connoisseurs. He’s been in the business of traveling the globe and discovering local libations and the people who enjoy them for a few years. His flagship TV show Three Sheets became a cult classic, with a huge following. The show even promoted good-will towards drinkers. Three Sheets Forward, a spin-off of the good will act ‘pay it forward’, where members of the movement purchase a drink for a random stranger that is wearing anything related to Three Sheets.

Recently, Zane successfully raised over $600,000 thousand to produce a first-ever KickStarter TV show, CHUG, which will air on NatGeo on November 24th. CHUG, a drinking travelogue, will take Zane from the awe-aspiring frescoes of Rome to underground Malaysia and pretty much everywhere in between, all the while learning about drinking customs and getting rowdy with the locals.

I got the chance to ask Zane a few questions about shooting his latest show.

Hey Zane. First off, wanted to say I’m a big fan of yours. You’ve made this itinerant dipsomaniac (I’ve always wanted to use that word) think deeper when it comes to drink, drinking partner and setting. Your previous shows have helped intensify my curiosity for world, cultures and people, but didn’t really do any good for my liver or bar bills.

Ok, so done with the high-fives. Let’s ask a few questions about you and the filming of your new show called CHUG that’ll air on NatGeo on November 24th.

OAJ: Are there any scenes from CHUG that you wish will be aired but can’t because of censorship? Maybe you can wet our whistle instead.

Zane: When I Kickstarted the show, I promised the backers six half-hour episodes.  But, as a firm believer in under-promising and over-delivering, I decided to make the episodes an hour each, instead.  The time slot that the show fits in at National Geographic Channel is a half-hour.  So, they are taking my hours and cutting them down to tight half hours.  They’re doing a great job at the cut downs.  The half hour version of the show is great. The bonus is that people can still watch the full episodes on the DVDs.  So, people will get to see what NatGeo cut out.  It’s odd that a company with a reputation for not censoring naked indigenous people decided to cut out all of the scenes where I am shirtless or on a Speedo.  It’s odd… but for the benefit of the viewer!

OAJ: What’s that one Ah-ha moment during the shooting of CHUG that you realized, damn I have a f*&^king awesome job?

Zane: I was sitting on a beach in Fiji– I think I’ll end it right there.  You get it.

OAJ: What’s that one moment that you said ‘traveling sucks’? We’ve all experienced it, but didn’t mean it…maybe it’s that moment when you got home-sick or just got mugged by a tranny in Paris…shhh, that didn’t happen to me…

Zane: I only get that feeling at airports.  We have a lot of luggage, as a video crew, and the airlines don’t have concrete guidelines with regards to how (and how much) they charge us.  So, we’ve paid as little as nothing for our extra baggage (because a nice lady was having a good day) and as much as $4,000 in Kuala Lumpur, because they gave us the wrong information about when to check in.  If we would have checked in four hours prior, instead of the three hours that we were told, it would have been only $400.  We got there early, but still 20-minutes late.  In CHUG, since half of it was funded by Kickstarter, and the other half by me, each dollar count.  That one hurt.  Thank you Air Asia!

OAJ: Does your family get to travel with you? I only ask because my wife would impale me, and my daughter and son would divorce me if I were to travel alone.

Zane: My wife is the producer of the show.  She’s been producing my shows since Drinking Made Easy.  And, yes, while she probably wouldn’t give me too much crap if she missed out on a trip to Poughkeepsie, NY, she would probably harm me in my sleep if I said I was going to shoot for a week in Rome without her!

OAJ: When you get back home after your travel shoots, do you get any travel withdrawals or miss that one drink that you wish you can replicate but never can because the setting or people aren’t the same?

Zane: When I get home, I feel grounded. Not grounded like when my dad caught me stealing beer from his fridge.  Grounded in the feeling that I am back in my own place with my own stuff.  It’s a good feeling to come back to.  But, after a few weeks, I feel the need to travel.  Thankfully my work indulges me with the ability to constantly change my surroundings.

OAJ: That’s awesome that CHUG is TV’s first-ever Kickstarter funded series. People love you! How did it feel to see all the support?

Zane: Honestly, it was very emotional.  I cried.  I would have also cried if I failed… But instead I cried tears of joy, and for the release of stress that had been on me for the past 40 days.  Kickstarting the show was the most difficult thing I’ve had to do in my professional career.  Every day was a grind, and we almost didn’t make it. So, in the end, when we made our goal on the very last day, and 8,177 people reached into their pockets to help fund the show because they believed in me, it was a great moment.  I felt like Sally Field accepting her Oscar for Places in the Heart. “You like me right now. You like me!”

OAJ: I’ve seen many food shows that have a host travel the nation looking for the best-fried burger or gigantic hoagie or heart attack burrito and wondered how can they survive or keep the weight off (some, unfortunately, fail on the latter). I know moderation is the key for everything but sometimes the hand will get heavy and the mouth gets thirsty, and then your drunk. Do you have any form of detoxing after your shoots?

Zane: I believe that moderation is the key to longevity.  But moderation, all the time, can get a bit boring.  How do you know you’re being moderate, and not just dull, unless you overindulge every now and then?  And, how good would my show be if I was straight-laced and proper.  So, yes, there is detoxing every day while I’m shooting.  I start the day with a run or long walk (depending on how far I strayed from moderate the night before).  And, when I get home, I don’t drink for a while… at least for several hours.

OAJ: And final question, will Pleepleus be making a debut (DRINK!) in CHUG?

Zane: Yes!  You can’t keep the monkey down!