It was our last night in the Outback, tomorrow we would be heading back into town for a much longed for shower and bed. My friend Rachael and I had sweated and fly-swatted our way through five days in the red centre of Australia. We had slept in open swags to the howl of dingoes in the not-so-distant distance while their pups ran through our campsite. We had braved the frigid water of fresh waterholes that barely saw the sunlight in their canyon bottom locations. Rocky cliff faces had been scaled and desert wildernesses had been hiked through, with litres less water than the trail information signs recommended. I accepted most of those things as part of the experience but it was still comforting to know this would be our last night roughing it.

The previous day we had pulled into the camping ground at Ormiston Gorge in the West MacDonnell Ranges with the promise of rock wallabies by the waterhole at sunset and a lone Ghost Gum Lookout walk along the top of the Gorge cliff-face.

The on-site rangers were a friendly retired couple and through our conversation of smiles and nods I must’ve missed the gravity of their warning to be aware of a mouse infestation. Apparently a rodent plague originating in South Australia was travelling north. And the Ormiston Gorge campsite…was North.

Later, warming up dinner on the campground barbeques I could hear scurrying in the nearby bushes. Standing still I watched as slowly braver shadowy creatures would emerge from the undergrowth tempted by the smell of two minute noodles and canned soup. A quick stomping of feet would send the mice back to their hiding places, until the next unwatched moment.

Rachael and I decided NOT to sleep outside on the ground in our zipper less swags and cleared out the station wagon, folded down the back seats and fit our beds perfectly side by side. The night was uneventful.

Breakfast the next morning was shared with our camping neighbours – a couple who were biking from Alice Springs to Kings Canyon – their belongings trundled behind them in small trailer like a harness horse race carriage.

“Did you have any trouble with the mice?” he asked.

Even the desert morning sun couldn’t warm my back while shivers were sent down my spine listening to his descriptions of mice crawling up the outside of their tent all through the night, scratching and squeaking, gnawing and clawing presumably trying to get to their food rucksack inside the tent.

We sympathized with our neighbours and congratulated ourselves on our smart thinking of sleeping in the car and soon set off on the “Pound Walk”, an 9km stretch of the Larapinta trail taking us straight up a rocky mountainside. Wildflowers sprouted leading to a high ridge lined with ghost gums. Our vantage point allowed 360° views of the wide open basin below where a river wound through the pea-green bushels of grass dotted with sandy and copper coloured patches of earth. The rippling breeze cooled our faces and kept the flies out from behind our sunglasses.

Recent flooding necessitated swimming the final section of the track that led through Ormiston Gorge itself. Techniques of trying to swim with cameras and other dry stuffs in plastic bags on our heads failed. The chilly water started my teeth chattering as I pressed on with my one armed stroke limping along like a three-legged dog.

That evening, I mechanically heated another round of canned camping foods for dinner. Again my guard was tested by mice creeping in from the nearby bushes. Stomping feet and shooing noises seemed to have less effect this time.

“Make sure you keep the car doors shut. We don’t want them getting attracted to the food” I warned Rachael.

For safe-keeping our camping neighbours decided to store their food bag in our car that night.

With the sun down and the mice outside we settled in to a game of cards inside the car. Not long later we heard an unmistakable rustle of plastic bags. Dread filled my stomach as we sat stone still while the crinkling continued. “I think it’s a mouse.” I whispered, the sickness in my stomach reflected in Rachael’s eyes.

Hoping to flush the noise-maker out we hunched in our sleeping bags armed with torches ready to spotlight at the first sound. With a speedy click, a burst of light framed a little brown mouse momentarily frozen on his hind legs, paws raised and ears open.

I wanted a hotel, I wanted a mouse trap, I wanted a big manly man. All I had was a weakening torchlight and a frypan. There was no choice but to brave the hundreds of mice outside the car to battle the one inside it. A dash through the trees to the park ranger’s house armed me with the last of her mousetraps and the knowledge that running through the bush in bare feet at night, wasn’t such a great idea with all the snakes and dingoes that regularly haunt the picnic areas. Thankfully, I pounded back to the car unbitten and adrenaline fuelled to set the traps on the floor.

Do mice like sesame seed crackers? Our answer came with a slap as the trap door closed. I put the mousetrap outside, thankful that we could finally rest easy.

My victorious feeling as a mouse conqueror was shattered when within minutes another scratching sound was heard. Two mice? Oh no, it was going to be a long night.

My muscles were tense, my eyes and ears were strenuously alert. I wielded a stick and saucepan and at every sound used them to discourage the rodent from thinking my bed could be his.

The mouse was running through the air vents, scratching and squeaking. I blocked them with plastic bags after seeing twitching little eyes through the slots. It was actually comforting to hear the gnawing sound in the vents. At least we knew where it was. It was during the silent moments that I held my stick a little tighter, held my breath a little longer ready to whack it near any tip-toeing claws.

We tried leading trails of crackers out the door. Turning on the ignition with the fan on high to flush the mouse out through the engine. With the bonnet up I saw a mouse pop up through the pipes and scurry across the grille. It eluded the slaps and pokes of my stick now aimless with tiredness and frustration.

We opened and closed doors multiple times to trigger the light after the torches went flat. Each time hoping we weren’t welcoming in a new mouse. Plastic bags on the floor and stuffed underneath the pedals made a primitive and ineffective alarm system.

I saw a movie once where a rat came flying out at a person who was peering too closely into a hole in the floorboards. I imagined the same thing was about to happen as I opened the glove-box that held a feasting vermin inside.

The mouse seemed too smart for any innovative efforts. In fact I think during one silent period he had left to tell his friends of the cosy, food filled car that was just a wheel climb and an engine vent squeeze away. Soon there was gnawing in two different places near the front of the car and a scratching near the back. It was traumatizing. I had been awake since 6am the previous morning, completed a long hike in the hot sun and had now spent an exhausting night on mouse guard.

Dawn approached and as the light grew outside a mouse was silhouetted against the window creeping up the seat back. How many times had this happened invisibly during the night? I shuddered at the thought as I lashed a stick at the lightning fast rodent.

I’m no stranger to late nights and little sleep but partying with friends is nothing like being kept awake at the mercy of a relentless and inescapable rodent.

With the sun finally up we hoped the mice had left the car. Pulling out all our luggage items we found evidence of the mice’s feasting revelry at our expense. Shredded potato chip bags, nibbled crackers and scratched off water bottle labels were all that remained to account for our dark, sunken eyes and frazzled appearance. I pulled my swag out onto the dirt and wearily promised myself it was okay to fall asleep.

Our neighbours told us they’d had no problems with mice, but they had been kept awake by car doors opening and closing, weird banging noises and engines running through the night. So in other words, in my opinion they had a very peaceful night.

Up The Bridge and Over My Fear | Auckland, New Zealand 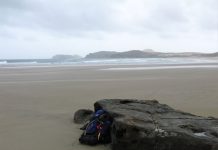 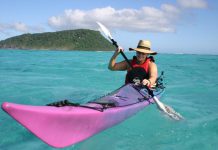 A Kayak in Samoa – paddling from Upolu to Nu’utele