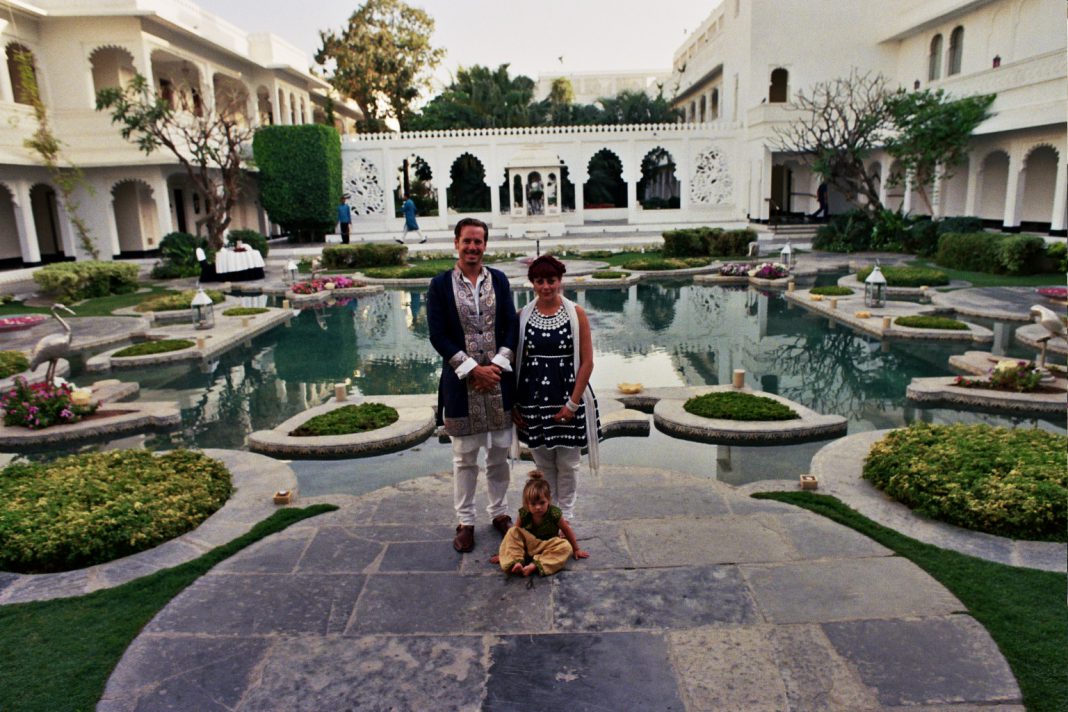 For two decades I’ve dreamt about an Indian palace on a peaceful lake in the desert of Rajasthan. It’s a hotel now, but when I first fell in love with it, the Lake Palace in Udaipur was home to a James Bond villainess known only as Octopussy. In the film of the same name, Octopussy reigned over the beautiful female devotees of her Octopus cult who frolicked day and night in the island’s exquisite lily pond. Like every other man who saw that film I wanted to visit the Lake Palace, to see this wonder for myself.

In reality the Lake Palace is one of the most luxurious 5-star hotels in India and is not a harem at all. While this may disappoint some travellers, it has nevertheless been voted by Travel+Leisure Magazine as the ‘most romantic hotel in the world’ and staying there alone was out of the question. So I took along my wife Kass, ever the romantic, and our 2 year old daughter, who is a kind of antidote to romance but knows how to make us laugh.

For us, travel has always been a conscious embarkment into fantasy. Escapism, if done right, can become a total immersion into another culture. While many prefer to dress ‘down’ rather than ‘up’ while holidaying, getting into character is essential for us. Once, for example, while visiting Salvador Dali’s museum in Catalonia, we dressed like the artist himself, replete with fake moustaches waxed erect. 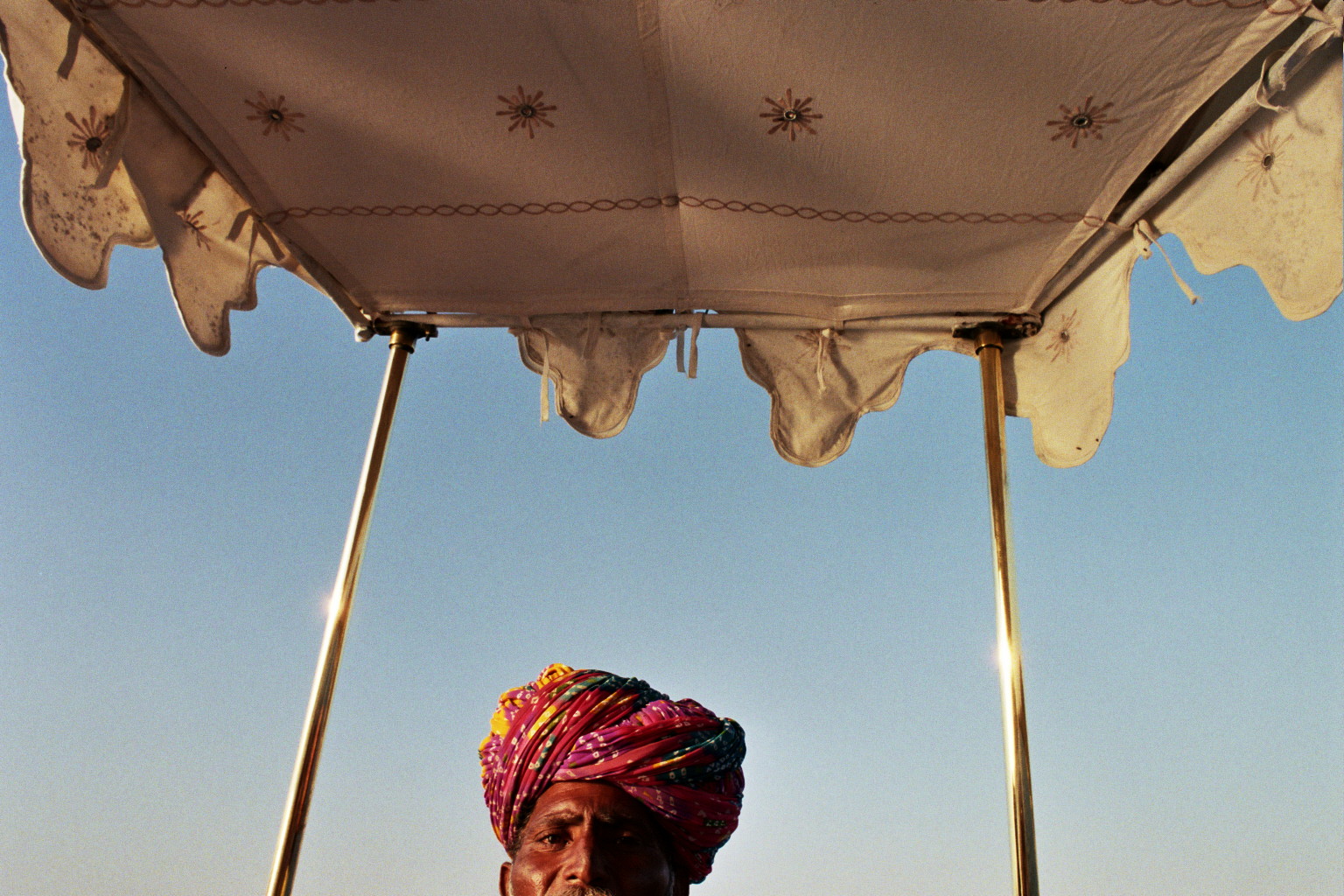 The Lake Palace was built in 1743 by Maharaja Jagat Singh II and is still owned by Maharaja His Highness Arvind Singh. Thus, going as a royal family from Australia made perfect sense. At the very least we hoped it might result in an upgrade. Question was: how easily would the Indians buy the absurd notion of a white Australian maharaja and his maharani wife and child? There was only one way of finding out.

Our busy schedule in India negated our usual practice of having clothes tailored to fit. But the country is full of wedding boutiques where fantastic bridal suits are readily available. In Udaipur city we quickly found impressive silk garments beaded with faux jewels. The final arrangement was a phone call to guest services at The Lake Palace purporting to be the personal assistant of the ‘Maharaja of Sydney and his wife and child’, informing them of our imminent arrival.

Gondolas to the palace depart from a wrought-iron pier constructed to look like a giant ornate bird cage. Here we were met by a team of courteous, almost reverential, hotel staff who guessed who we were right away.

‘The Maharaja of Sydney?’ came the turbaned in-charge, his face deadpan.

‘Welcome, your highness,’ he replied, as the rest of the party gave their ‘namaste’ with extra-low bows of the head.

More reverence awaited us as we disembarked on the island itself after a bewitching boat ride. A shower of blood-red rose petals sprinkled down from the top of the palace. We half-expected the hotel staff to have seen right through our silly charade. But no. Everyone there, from the petal sweeper up, treated us like royalty. 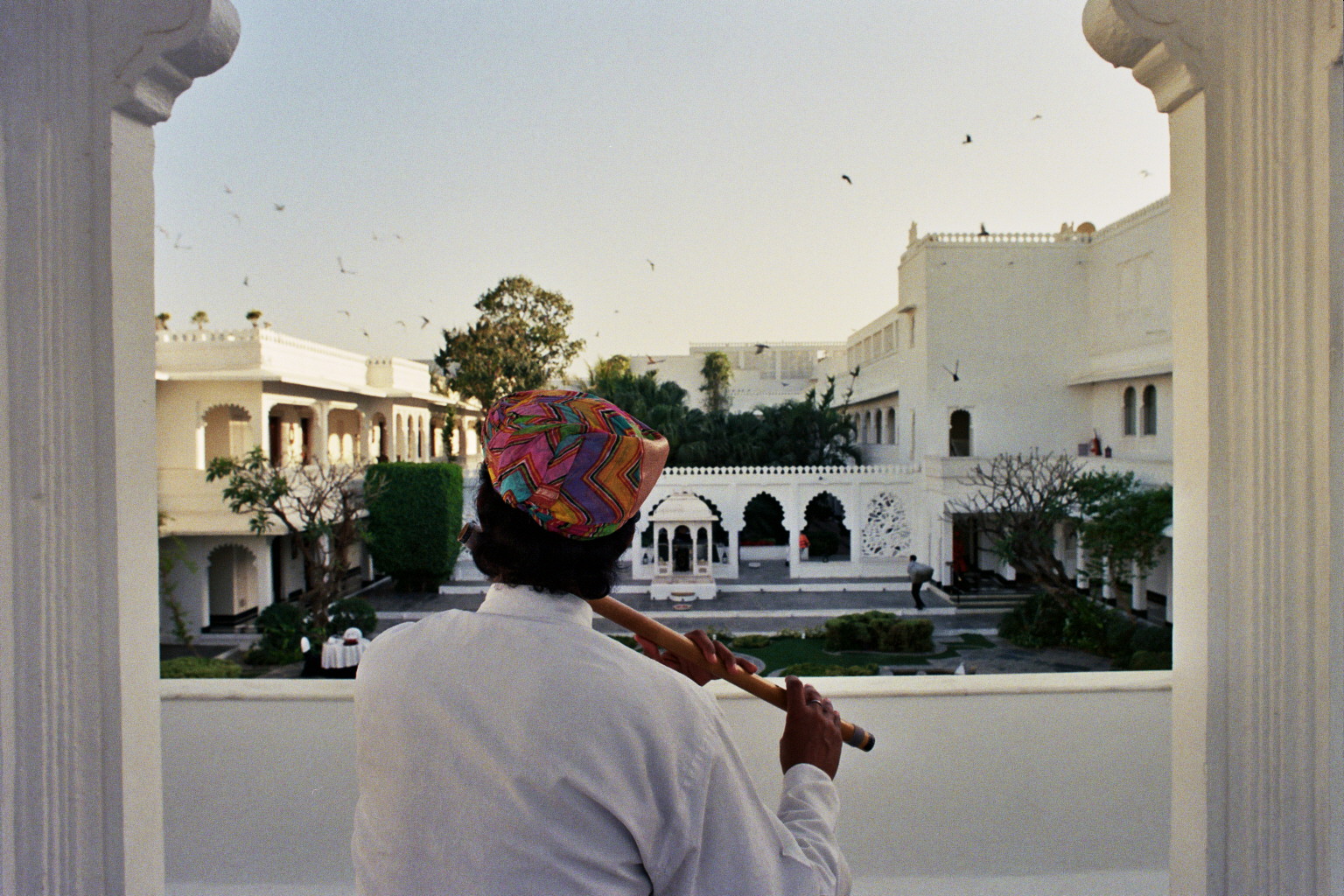 Into the gardens and past the fabled lily pond we went. Even without Octopussy’s girls it was like a preview of heaven. The ethereal atmosphere of these common spaces, with their fountains and cool white marble, was utterly spellbinding. In these gardens the only sound is a gentle tinkling of water and soothing notes from a bamboo flute played by a man seated like a bird in a little domed pavilion.

Those wanting a mere peek at the palace would be saddened to hear that casual visitors are not permitted on the island. But for guests the tranquility this preserves is worth every cent.

‘Your Highness, we have upgraded you to the Presidential Suite. It’s the best room we have.’

There is something weird about staying in a room that both Queen Elizabeth and Madonna have slept in. It couldn’t be described as a ‘room’ either. At 1800 square feet it was more a palace within a palace. High Rajasthani arches worked harmoniously with enormous European chandeliers, and the room had it’s own library too, stocked with the finest literature. It’s museum of extremely valuable Indian artifacts however was the first thing our 2-year-old headed for.

While I never thought we’d be upgraded to a $10,000-a-night room, it felt even stranger to be phoning the front desk a few minutes later asking for a downgrade. ‘Australian maharajas are very humble, you see,’ I told them. ‘We, er, celebrate simplicity.’

And so we ended up in Octopussy’s lair, where I wanted to stay in the first place. The room was just as marvelous as the Presidential Suite, a spacious sixties interpretation of Indian regality, even without it’s own museum. From an alcove of red and blue stain glass, we spent two sunsets reclining over a pink Lake Pichola. Whenever we left our room for dinner on a private domed terrace we were sure to dress in our robes, never letting our real identities slip.

Our attentive butler always arrived with a mere clap of the hands and was no ordinary man. Indeed, having noted us listening to our favourite Indian soundtrack to the Hindi film Mughal-e-Azam, he arrived on our last night with the DVD on a silver platter, having ordered one in from the Udaipur bazaar. 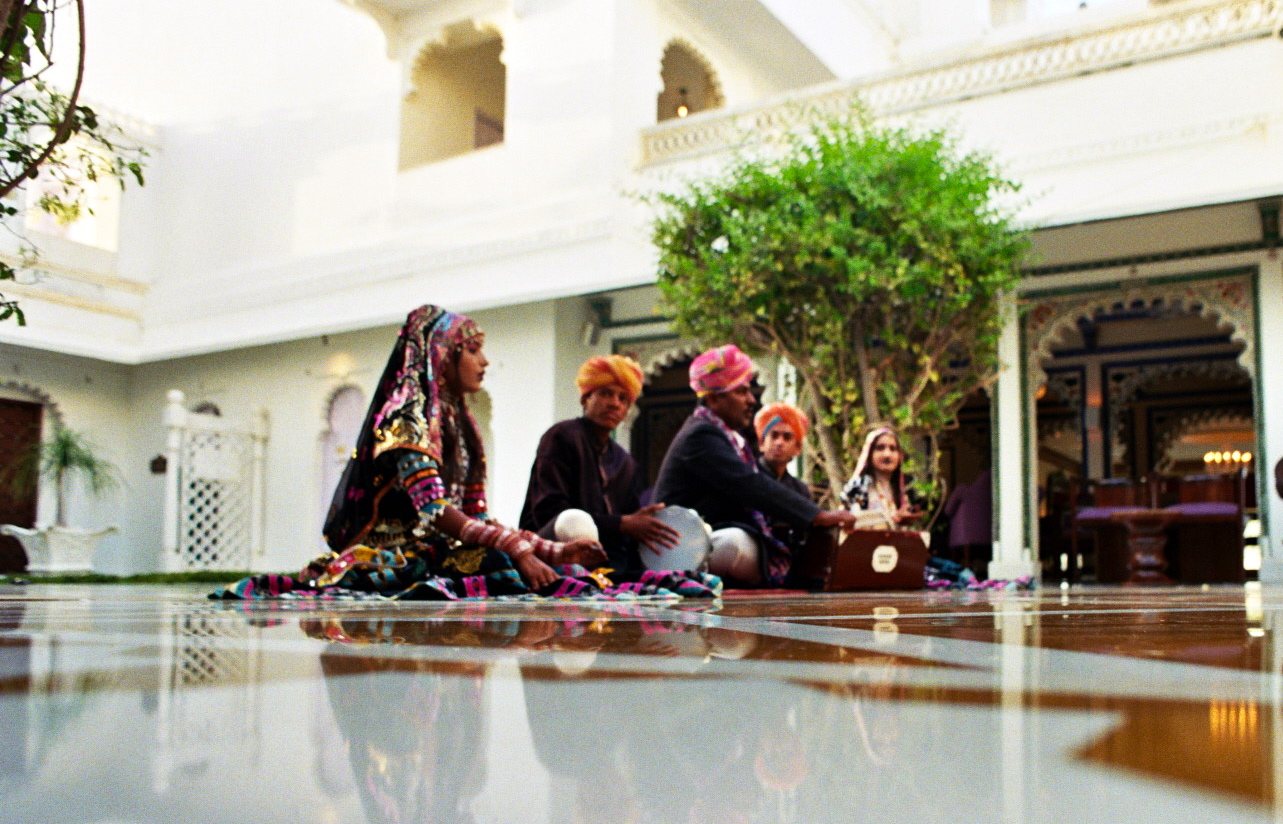 ‘Yes, we’re all about the personal touch, Your Highness’ said Shyam Kaikini, general manager of the hotel when he met us at breakfast on our last morning. ‘A week ago a man had his birthday here and we made some secret enquiries about him and found out he was the owner of a cruise liner, a lover of ships. So we prepared a giant merengue cake in the shape of an ocean liner.’

‘You make enquiries about every guest?’ I asked him, now a little uncomfortable.

‘Of course, only for making them happy.’ Then he gave another example, arranging a private firework show from a fleet of gondolas for a man proposing to his beloved. ‘Facilitating fairytales’ is what the Lake Palace is all about, he added.

‘So you know who we really are, then?’ I asked, a little embarrassed at the idea that he, along with everyone else at the Lake Palace, might have known the whole time that we were just an ordinary family from suburban Sydney.

‘Of course we know,’ he smiled, getting up to see us off, bowing his head in respect. ‘To host the Maharajah and Maharani of Sydney has been the greatest honour. Please, Your Highness, we do hope you will come again.’

We paired Benjamin Gilmour's story with a yummy recipe inspired by the tale. Go to the next level & eat where Benjamin Gilmour been...wait, that sounds a bit off. But you know what I mean! Bon Appetit.

Seven Reasons Why Tenerife Needs to Be Your Next Vacation Destination