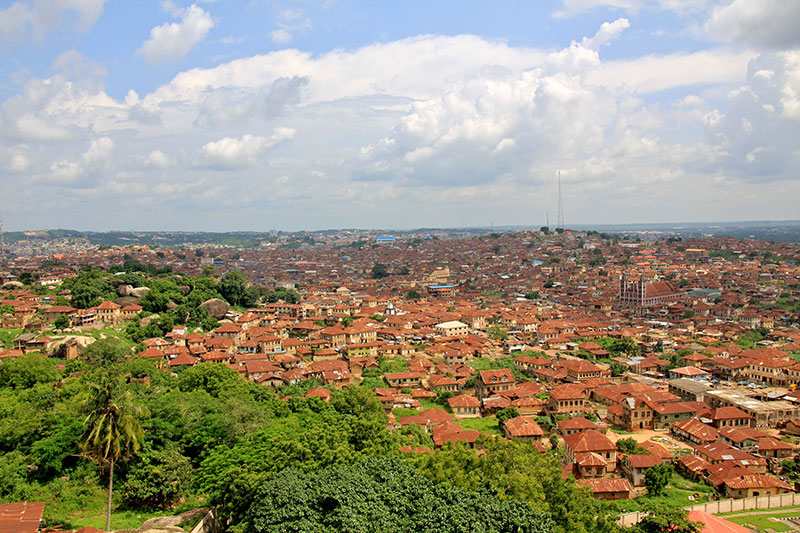 The Nigerian border post was a tired, ramshackle building with peeling paint and a rusted tin roof at the end of the rutted dirt road from Benin. There was a pocked field out front, fringed by jungle. It was manned by four armed, scary-looking guys in military green.

It should have been an intimidating scene, especially since darkness was fast approaching. But as soon as we rumbled up, the guards broke into broad smiles and invited us to camp on their porch. They offered us their ablutions as well – but once my friends and I stepped into the dank, putrid little room with its two decrepit, stained toilets (one of which was cloaked with spider webs) we decided, unanimously, to use the jungle instead.

They were closing the border for the night, but agreed to process us in exchange for an invitation to our cooked-over-a-campfire dinner. Good deal!

The night bloomed into a glorious garden of stars as we hung mosquito nets beneath the overhang on the side of the building.

Sometime around 3am, a heavy bank of cloud raced across the sky, devouring the stars. At 4am, all light drained away, leaving an impossible, threatening darkness. And at 5am, the world seemed to turn upside down and every drop of water from every single lake, river and sea came crashing back to earth in one torrential wave.

We scrambled up, but weren’t fast enough. We huddled back against the building, laughing and shrieking as the wind whipped in rain and soaked us. The guards woke at the thunder of the downpour and unlocked a side door, looked at us like we were crazy then beckoned us inside.

The deluge dwindled to a grey drizzle and we set out under a pale dawn.

There are three main highways through Nigeria – the high, middle and lower roads. The high road traverses the north of the country, crossing through the capital, Abuja. The lower road goes through Lagos, the second city of Nigeria and one of the most dangerous metropolises in Africa. Our route was the middle road, cutting between and bypassing both these major centers.

We had been going for barely half an hour on poor roads before we hit our first roadblock.

From where the Nigerian officials (or “officials”) were checking our passports, we could see the next roadblock. It was less than 500m down the road.

This was the Nigeria we’d heard about. The corrupt, potentially dangerous Nigeria full of blockades and crooked government officials and cops on the take. We’d heard about street violence in Lagos and guerillas and shootings. Since January 2009, 140 foreign nationals have been kidnapped in Nigeria and six of those were killed.

Read more Funny Travel Stories from travelers like you!

The first city we came across, Abeokuta, was a sprawling jumble of businesses and homes and shop fronts all spackled together at random. Streets began and ended and veered off and doubled back on themselves in no discernible pattern.
The roads were crammed with buses and motorbikes, rusting cars and sleek sedans, and carts pulled by donkeys. Competing for space were mobs of people, impromptu market stalls, chickens, dogs, garbage, beggars and petrol stations that were nothing more than rickety tables displaying glass Coke bottles full of gasoline.

We crept through traffic, bumping over broken asphalt and pot-holed dirt.

The city was alive with a cacophony that engulfed us. Horns blared, truck engines roared, chickens and roosters squawked furiously as if knowing their final days were near. Vendors hawked their wares, shouting over the traffic and the clamor of metal on metal from auto body shops and the blaring music that screamed into the street from huge speakers outside every other shop.

Clouds of cooking smoke, carrying the tantalizing tang of meat on the grill and bread baking, competed with plumes of exhaust and the festering stink of open sewers stagnating in the heat. A deep breath was a gamble.

Many of the buildings bore bold signs that declared, “Plot not for sale. BEWARE 419.” The 419 scams – named after the article of the Nigerian criminal code relating to fraud – were everywhere, with local Nigerians tricking gullible people from within the country and abroad into handing over their money on the false promise of larger gain.

We parked in a dirt lot and were immediately mobbed. The engine was still running and already there were so many people pressing curiously around us that we could barely open the doors.
We pushed our way out, waving off offers to buy everything from produce to flip-flops; all the products balanced in gigantic bundles on the sellers’ heads.

Traveling through Africa I came to realize that somewhere, at any given moment, every single thing imaginable is being carried on someone’s head. I saw tubs of water weighing at least thirty pounds balanced by thin women who carried them for unknown distances. There were stacks of clothes, bundles of cheap toys, miscellaneous appliance parts, fresh fruit, salted fish and, my favorite: a sewing machine, which was being carted by a Ghanaian woman down a strip of beach at twilight.

It was late afternoon in Abeokuta, the day’s heat radiating from the asphalt, when Lisa, Ryan and I found the local market.

Sprawling down a steep hill, the market was a madhouse of color and noise. The first stalls were crammed with plastic buckets in primary reds and blues. Beside these, hundreds upon hundreds of pairs of flip-flops made a bizarre, jumbled rainbow.

Stores were bursting with packets of cookies, chips and UHT milk (chocolate and strawberry) in single portion boxes. There were crates of glass Coke and Fanta bottles stacked twelve high.

Chickens scratched in the dust on the side of the lane. They clucked angrily if you got in their way – this was their domain and would remain so until they ended up in the soup pot.

Restaurants, only a few meters wide, were squeezed between the shops, spilling their tables and chairs into the alleyway. The patrons were boisterous and loud, swilling huge bottles of Star beer and scoffing bowls of fufu.

I love fufu. It looks disgusting – a thick glop of white paste made from cassava that has been boiled for at least three hours then mashed. It doesn’t taste like very much and has the nutritional value of a paper bag, but it is the main dish of the common man… and partnered with mouthwatering fish or beef stew, fufu makes a great meal.

We passed the restaurants, forcing ourselves to go by the alluring scents without succumbing to temptation and joined the throngs of people doing the day’s shopping in the wet market.

Flies swarmed relentlessly as meat was hacked into pieces by women wielding massive cleavers. Huge hunks of flesh dangled from hooks and pigs’ heads and feet cluttered the butchers’ tables.

Past the meat was produce: juicy red tomatoes, leafy cabbages and sweet oranges with green skin. Pineapples were heaped in huge baskets, beside huge baskets of bananas. Piles of yams were stacked beside piles of cassava. Mangoes ripened then fermented in the heat.

It was a beautiful madness! The crowd was buying and selling and bartering. Live chickens were being carried home in plastic bags; sweet potatoes were being weighed on old-fashioned scales; and stray dogs were cutting between the sandals of the mob.

Ryan wandered off in a different direction and later told us that a local man had come up to him and started a conversation that went like this:

“Hello! You are missionaries?”

Meanwhile, Lisa and I were winding through the chaos, dodging elbows and wheelbarrows and suspicious puddles on the ground that could have consisted of anything.

Suddenly, from the corner of our eyes, we saw someone coming at us. In our Nigerian paranoia we immediately suspected a thief, mugger or kidnapper. The last thing in the world we expected was the huge, African Momma that was chasing us.

She was as bright and boisterous as the market itself, wrapped in a neon green floral pagne skirt and a shocking orange and blue head-wrap. Her bosoms heaved as she charged at us – and how bizarre was it that she actually made me think the word ‘bosoms’.

She threw her arms out, bright yellow blouse brilliant in the last of the sunlight. Running right at us, she screamed at the top of her lungs: “Welcome to Nigeria!”

We did the only thing we could think to… we laughed. And we ran.

Nigeria was full of these unexpected, heartfelt welcomes. Everyone seemed astonished that a group of tourists was there.

Yes, there were roadblocks and crooked cops, bad weather and worse roads… but the image of being chased through a market in a welcome too exuberant and friendly for me to accept is what remains most prevalent about Nigeria

Surf and Sand in Cancun: Your guide to Playa Las Perlas...