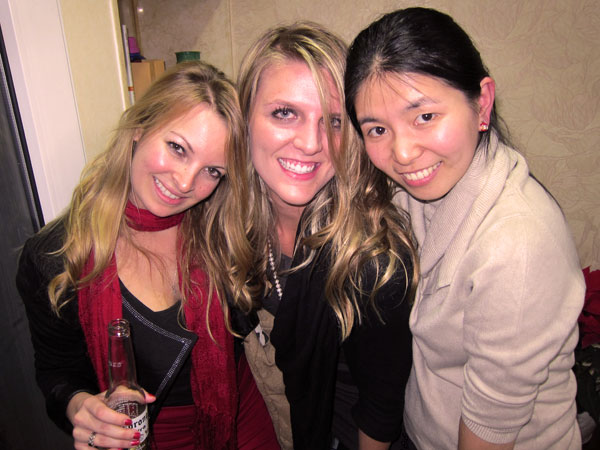 I woke up this morning with a pounding headache, in desperate need of Advil.

I quickly washed two down with a large glass of water and stumbled my way to the bathroom wondering how the hell I got home and how I managed to sleep through the whole night without using the toilet or peeing my pants.

“It’s a Christmas miracle, or maybe it’s the luck of the dragon.” I thought to myself.

A trail of clothes lead from the front door of my apartment all the way to my bedroom, where my bra graced the foot of my bed with its presence. Who the hell knows what happened to my underwear. (Investigation pending).

My hands were shaking ferociously like a crackhead going through withdrawal and bouts of schizophrenic laughter kept involuntarily popping out of my throat when I thought about last night, my first official night out in Fuzhou, China. (Fuzhou is the capital of the Fujian Province. It is a beautiful city located between the mountains and the sea.)

I have been in China for two months teaching English to children at a language school in Fuzhou, but up until now have been all work and no play. As evidence from last night shows, my maturity streak has come to an abrupt and somewhat painful end. 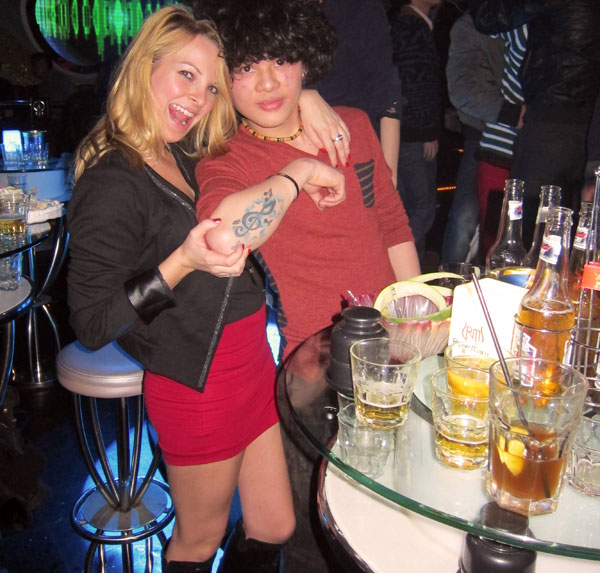 One of my co-workers had a housewarming party last night. I went with my roommate, and fellow teacher, Mel. We each pregamed at home with our own bottles of Changyu (a three dollar brand of Chinese red wine, and the only one our budgets allow us to afford) before heading to the party. Once we arrived we had three beers and two glasses of champagne. By this point, I was done for. The drunken spirit had already begun to claim my existence and take over my thoughts.
I needed to drink and dance.

I needed a club.

“Okay” Mel replied. “Where should we go?”

We invited another one of our coworkers named Cally. She always asks us to come out with her and we always say no, so inviting her seemed most appropriate.

“Where are you guys going?” She asked.

“Okay, there’s a club called Rosemary, it’s kind of sketchy but they have really strong Long Island Iced Tea’s and they pour them into pint glasses so you get super drunk after one.”

We walk outside, it’s 45 degrees and we are freezing. Cally sticks her hand out to quickly hail a cab. The night is busy, with thousands of people all over the streets furiously peddling bicycles, driving mopeds, cars, trucks, buses every which way…even on the side walks.

Sounds of honking come from every direction. Front. Behind. The sidewalk. The street.

A moped with a mother and her infant child strapped to her back honks at us to move. As we take a step back a cab weaves toward us, not even a foot away from knocking over the moped carrying this mother and child. She doesn’t bat an eyelash.

China traffic is like being in a Grand Theft Auto game, your life is always at risk, and there is no concern for pedestrian well-being. But, no one seems to notice the nonexistent laws of traffic except for the laoweis (foreigners).

“What happened last night?” I wondered.

A piece of the puzzle! 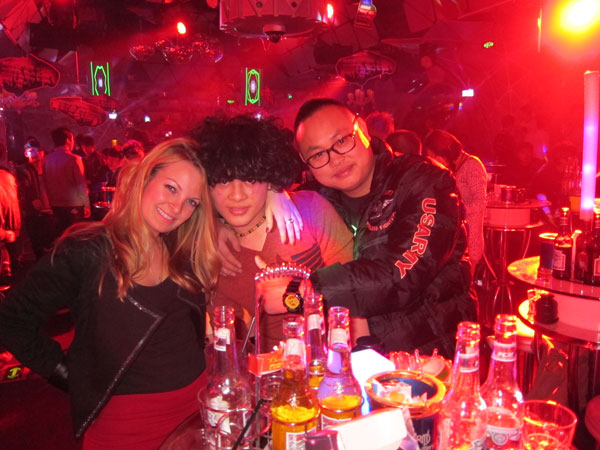 I remember being in Rosemary (the club previously mentioned) drinking my second pint glass of a Long Island Iced Tea. A fabulous Chinese drag queen with bleach blond hair, Gothic makeup, and a silver and pleather spiked dress got on stage and started singing and dancing. I wanted to join him. I needed to join him. And the alcohol told me I could. So I did.

Lady Gaga “Alejandro” was playing in the background. The lights were flashing quickly from red to blue, yellow and white.

Wearing a tight red mini skirt and high-rise leather boots I started jumping around and busting out some killer dance moves. (At least that’s what my drunken mind told me they were). I look down to my right and see a table of four Chinese men chugging Sedrin (cheap Chinese beer) and staring intently–one points a finger at me and whispers something to the guy next to him. Before I know it they’re all pointing and staring. “They must really like the way I break it down,” I thought, smiling confidently as I kept bustin’ my moves out.

Suddenly, I felt a breeze, and looked down to see my skirt had crept it’s way up, up, up.

“Fuck! My Britney!” I said as I pulled my skirt down and jumped off stage. I ran up to the table my two girlfriends were at and told them the audience just got a preview of my ‘American girl’.

I’m squatting in the bathroom over the Chinese version of a toilet, and the American version of a man whole. Trying to hold my balance while peeing. I look around for toilet paper, “Shit, I forgot to bring my own.” I thought to myself. In China toilet paper is not provided in the bathrooms, so you always have to have a roll handy. “Oh well, guess I’ll just drip and dry.” I pull my skirt down and walk back out onto the dance floor.

I’m in a restaurant. Sitting down on a small plastic chair about two feet from the ground, akin to something you may have had as a five-year-old child. The table in front of me was dirty and cracked, but I didn’t care I was hungry.

Suddenly, like magic, a mass array of tofu, fried rice and other unidentifiable Chinese cuisine (I’m crossing my fingers and hoping dog and cat were not part of that drunken chow) appeared before me.

I heard the sound of someone spitting to my left.

I shuddered in disgust and looked over to see a man eating some kind of meat with chopsticks. After each bite he chewed he would pause, and ‘pphhhtt’ spit out the animal bones on the table.

Uck. I shuddered again and frowned at him.

The bone spitting is something I have never been able to get used to, even in a drunken stupor.

Two men from another table came over and started talking to me. I have no idea if they were speaking Chinese or English as the details of the conversation are a total grey area. I do, however, remember trying to ‘gan bei’ (cheers) them on three occasions, each time accidentally dropping and shattering the shot glass in my hand. Eventually, I gave up and just told them it was my “thing” to drop shot glasses after cheersing. They clapped and laughed, clearly entertained by my explanation.

I woke up with 160 kuai (bucks) less than what I started with, two business cards in my purse, a pounding headache and a newly debuted ‘britney.’

Note to self: Scratch the skirt when busting out killer moves on stage.