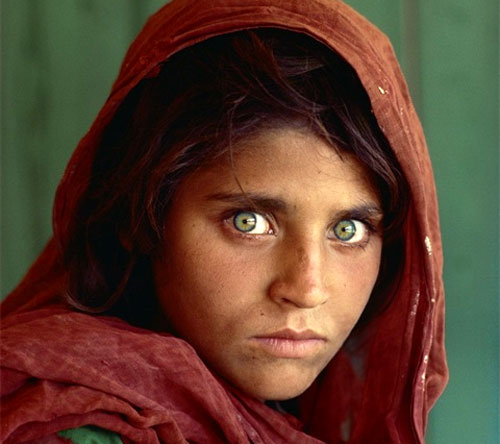 The rickety bus, ornamentally embellished in psychedelic colours, panted for breath as it clumsily climbed up the legendary Khyber Pass. This strip of land, blessed with the footfalls of many prominent personalities, ranging from the famous Alexander to the infamous Osama, presently served as an outlet through which the Taliban freely flowed in and out, striking terror in the lives of their own countrymen and even those who lived beyond the borders.

[quote]Wasn’t she Sharbat Gula, National Geographic’s the famous “Afghan Girl,” whose haunting, hazel-eyed gaze, mirroring the bewilderment of an entire race caught in the confusions of global politics, had once captivated the world from the front cover of the magazine?[/quote]

The bus was overflowing, not just with people, but also their peculiar smells – the odour of unwashed clothes clinging to bodies long unexposed to soap and shower, the repulsive stench emanating from huddled cattle and their pools of urine stagnating in little pockets on the rough uneven floor. Seated all around me on the spring-less seats were the men, tough-looking and towering in tightly wound turbans and loose fitting qmis and shalwars, the oriental equivalent of trousers and shirts. Most of them were armed with sturdy iron-tipped sticks, with an occasional Kalashnikov peering out from beneath the folds of the fabric.

Their women folk donning all-enveloping burqas, which hid every atom of their anatomy except the eyes from the outside world, squatted on the floor alongside their four legged co-passengers. From bits and pieces of their conversation, I could gather that they were fleeing their homeland, where during the day the sky regularly rained terror, while night was burial time for the dead by those still alive.

I looked outside. The way lay through the lap of the Hindukush Mountains, the setting sunbeams sliding down the bare bodied contours and bestowing them with a soft crimson hue. Afghanistan with its war, worries and wretchedness lay behind, ahead awaited a safer and saner world, in search of which these people had abandoned their battered motherland and boarded the battered bus.

Staring at the serene landscape, it was difficult to even imagine the horror which lay a few hours behind us- obliterated mud homes and mass graves dotting the dusty countryside; abandoned ruins of what had once been bustling settlements. The ruination of continuous conflict complemented by nature’s antagonism is really capable of degrading human civilization to inconceivable levels.

The country had been reeling under drought for the fourth consecutive year, when the American forces, firm in their belief that Osama Bin Laden, the architect of 9/11 was hiding there, descended on the land with all their arms and ammunition. Their arbitrary bombing, aided by faulty intelligence, reduced to rubble settlement after settlement, while their target remained elusive and uncaught. One moment, a man could be sitting in his hut, surrounded by his family, while the very next moment, his whole world would cave in under the impact of a misfired missile, wiping out everyone , except perhaps a lucky ( or unlucky?) injured survivor. The Indira Gandhi Hospital in Kabul, where I had spent the last month, was everyday flooded with cases of this kind.

And even when there was a temporary respite from the missiles and bombardment, the fear of stepping on landmines, silent death-traps concealed in the earth’s womb, remained constant. The sheer abundance of amputated population on the streets was horrifyingly startling and after being surrounded by so many limbless people all through the day, every night when I returned to my apartment, the very fact that I was still alive and uninjured, seemed no less than a miracle. Surviving in one piece was certainly the best parting gift I could ask for and was now taking back with me from this cursed country.

As I turned inwards, my attention was drawn to a veiled figure near me. Seated on her lap was a little girl of two years, who, after eagerly eyeing my sunglasses for quite some time, began badgering her mother for them. The woman tried every trick to quieten her, from request to rebuke, but nothing worked, for the little girl, like her counterparts in other parts of the world, was determined not to either give up or give in. Peace returned to our little corner only after I handed her the treasured piece, indicating that she need not return it. At my unexpected gesture, the woman lifting her veil smiled at me, her hazel eyes glowing with gratefulness. Soon the mother daughter duo got engrossed in the magic of the tinted world.

Staring at the playful little girl, oblivious of the miseries of the world into which she had been born, certain scenes from the hospital unknowingly began to play out in my mind. Back there, with electricity being an extremely erratic and short-lived affair, paraffin wax melted on stoves was used as a substitute to incubators to keep the newborns warm. The warmth was welcome but not the accompanying fumes, due to which many of them did not make it home, thereby helping in maintaining the country’s track record of registering the highest infant mortality rate in the world.

I was shaken out of the stupor by the razor sharp tone of a man calling out to the woman and instructing her to immediately return the fashion item, that is, my sunglasses. As he addressed her as “Sharbat”, the combination of the name and the gaze immediately rang a bell in my mind.

Wasn’t she Sharbat Gula, National Geographic’s the famous “Afghan Girl,” whose haunting, hazel-eyed gaze, mirroring the bewilderment of an entire race caught in the confusions of global politics, had once captivated the world from the front cover of the magazine? Two decades later, the zealous photographer had once more tracked her down to the remote mountain village where she was then living with her daughters. The rediscovery of the Afghan girl, nee Afghan woman, had again hit the headlines, but had it effected any change in her fate?

I looked at her intently. Time had eroded her youth and her dusty tanned face, now fuller, was full of creases and crevices. But her eyes, though paler and more weary than defiant, were still piercing – portraying endured hardships and the perseverance of the human spirit.

“Aren’t you Sharbat Gula?” I asked in broken Dari, the local lingua, which I had picked up during my month-long stint in the land.

She looked at me, wide-eyed with intense surprise, her reaction further confirming my suspicion about her identity. Then she hastily looked away, pretending not to have heard my question and I was almost sure that she was “the girl.”

“Are you a reporter?” her male relative gruffly asked, glaring at me.
No, I nodded. Just an Indian doctor sent on deputation to Kabul’s Indira Gandhi hospital, as part of one country’s commitment to come to the aid of another war-ravaged country.

“Oh!” he exclaimed “I thought you were one of those reporters who tricked my sister into unveiling her face and sullying our society!”

“But wasn’t she was photographed with her husband’s consent!”

“That fool was offered money and got carried away!” the man thundered. “Later on, he realized his mistake but by then the damage had already been done. Women are the wombs of the patrilineage. They must be kept secure and chaste so that the pedigree remains pure.”

Sharbat Gula, the famous Afgan Girl, by selling whose gaze, men in the western world (and undoubtedly some in her own too) had minted millions! Her penetrating poignant gaze, juxtaposing resilience and beauty, had inspired many to come to the aid of refugees, but her own fate had remained unchanged. She still lived a veiled life in a landmine-infested land, a land where women are not free, but trading in them is conducted freely.

It was almost evening when the bus stopped at a dimly lit bazaar dotted with medieval-age mud houses. Small skinny boys, shivering in shabby clothes, were aimlessly wandering about, some begging at the bus windows, pestering the passengers for small change. At a meat shop, a worn-out cow carcass hung from the ceiling, the lackluster limbs lit by naked flickering flames.

As the bus resumed its journey, we crossed an unusual cemetery, where some of the headstones were upright, while the remaining ones flat. Following my inquisitive eyes, a co-passenger explained in halting English that the upright ones belonged to men, while the remaining ones were those of women. It was appalling to realize that in this part of the world, even in death, supposed to be the great leveller, men continue to remain the dominant gender.

Suddenly, I noticed that Sharbat Gula had stood up and was readying herself for departure. Her brother was striding towards the door and she, with the sleeping daughter in her lap was about to follow him, when in an impulse, I softly nudged her and pushed the sunglasses into her hand.

“Daera manana “(thanks a lot) she whispered, and I could see that in spite of the suppression and suffering, to which she had surrendered as a precondition for survival in a man’s world, her eyes were twinkling –with excitement and interest about accessing a forbidden world, which, her daughter would hopefully in her own right gain access to. 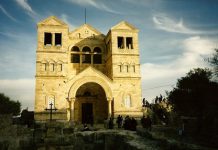 Calling of the Souls, An invitation to a Laos Baci Ceremony