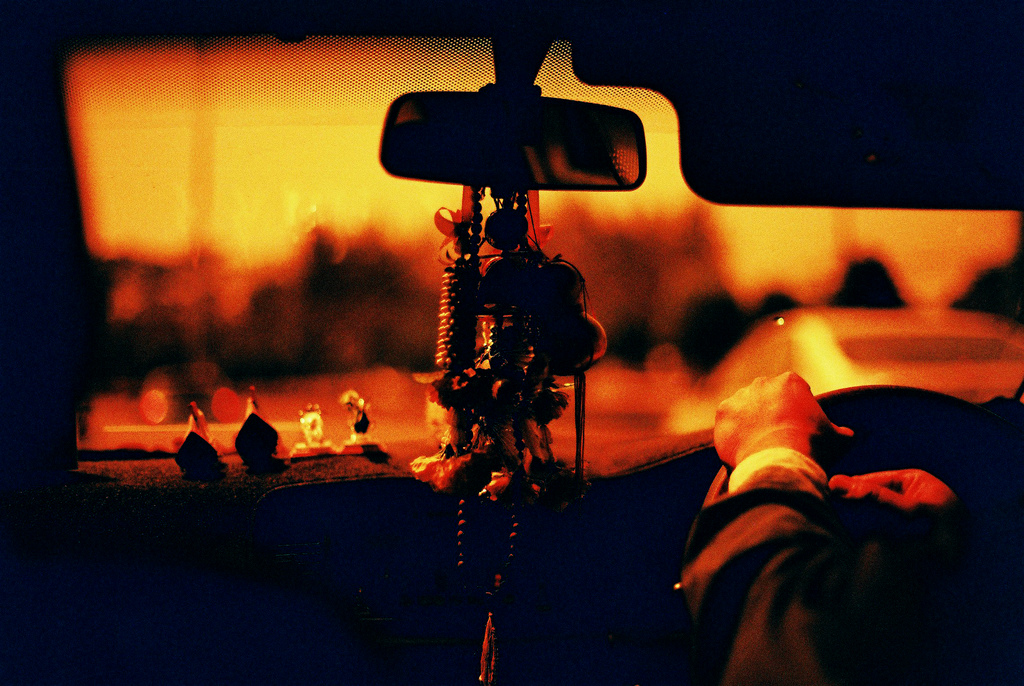 On my way to Kathmandu I had a stopover in Bangkok. I figured the cheapest and easiest way to get to Kao San Road was to split a taxi ride with another tourist. To my left I saw what looked to be an Italian American – a New Yorker – he had on expensive looking shoes, gold chains and gold rings, and his shirt was unbuttoned to show off his hairy chest. He’d know how to barter with a taxi-driver I told myself, and I approached him.

“Yeah, yeah,” He said, “me and my buddy here are going to Kao San. We’ll split the cost with you.” His buddy strolled up to us after a taxi driver had responded to his negotiations by screaming out, “Pock you ash-hole!” and squealing off to find another customer. This guy looked Italian too. He was short and loud, with big nose and a Brooklyn accent.

“You guys Americans?” I asked.

The hairy-chested guy went to speak up but his little friend elbowed him in the ribs and said, “Sure Sure. We’re from Manhattan bro! But we been in Thailand a long time. We know this place like we fuckin’ own it. You goin’ to Kao San? That’s where we’re goin’.”

“I figure we could split the fair,” I answered.

“Come on! ” Said the little one, “I’ll show you how to handle these little yellow monkey taxi-drivers. He flagged one down and began yelling in the drivers face. “You take us Dim Sum! No rip-off unnastan? You rip us off we take you Big Boss! You unnastan? Big House! You no rippy-rippy! No cheat-cheat you yellow banana!”

The driver said, “Pock you! It sheet!” and squealed off like the last.

Something told me these guys weren’t Italian-Americans. From a past experience in Nepal, I had the funny feeling they were Israeli ex-soldiers. But I wanted to see something worthwhile and different while I was in Bangkok, and figured that if anything I’d get a funny story out of this.

The next taxi that came by the two New Yorkers did not bother to barter with. Shorty dove into the front seat and Hairy shoved me into the back before I had time to think about it. Hairy smiled at the driver and said to go to some place that was not Kao San. The driver took off.

“I thought we were going to Kao San,” I said.

“Yeah yeah,” said Shorty, “Same thing. Right nearby. Listen to us. We know what we’re doing. These fucking flat-faced monkeys will cheat you for every penny see. You gotta give’em the fear of God to get the right deal out of ’em, see.” He shoved his nose right into the drivers face and said, “Look you little yellow baboon! You take us to where we tell you – for no more than one American dollar – or we will fucking kill you! Unnastan?” The driver’s English was not so hot, and he was excited and confused. All he could do was babble loudly, grunt and wave his hands around.

I said to Hairy, “What is your buddy’s problem man? He’s threatening the driver. He’s gonna get us jammed up!”

Shorty said, “Yeah, these fucking yellow gorillas are all Muslims! Animals! They’re everywhere in this country! They have no sense of civil negotiations in these backwater Asian countries, see!”

Hairy said, “You’ll have to excuse my friend. He’s just out of 2 years service for the Israeli Military. He’s been brainwashed, dealing with Palestinians.”

I said, “You told me you were New Yorkers.”

Hairy said, “We got double citizenship.”

I said, “My boys were born in Korea. We were told Americans cannot have double citizenship.”

Hairy said, “It’s different if you’re Israeli. I have citizenship in England too! I’m an international citizen! Ha ha ha! I get citizenship wherever the Hell I want to!”

Shorty said, “Koreans are more civilized than these Thai fucks, but they’re not Israeli. We’re big money. We got a business here in Thailand. You can work for us. You wanna get rich for us?” Then he turned to the driver and shoved his fist right up to the drivers nose. He said, “So help me God I will fucking send you to the Big House! You wanna see the Big Boss hah? Big Boss will hang you! I will have you killed! I know the Big Boss! We big friends!”

The driver jammed on his breaks right in the middle of the highway, and attempted to shove Shorty out the door with his feet, “Out ob my call! Dis my taxi! I kill you!”

Hairy and I attempted extinguishing the diver’s wrath with apologies and bowing. I offered to pay the guy whatever he wanted if he didn’t kick me out right here. Hairy showed him a big wad of American tens. The guy quieted down some, and drove, but continued babbling on about Shorty being a bad person, whom he should kick out.

I apologized over and over again, and tried to insult Shorty in order to let the driver know that I was on his side. But he was not happy at all. His hands were shaking intensely, lighting cigarette after cigarette. Eventually he got us to the road that the Israelis were talking about. It looked nothing like Kao San. It looked like a Japanese suburb, with pleasant villas and potted plants out on verandas. We drove past a family of Middle Easterners. Shorty rolled down the window and screamed, “We’ll nuke your fucking country you goddamn sand niggers!” I gasped. He said, “They got a fucking nuclear bomb just waiting for us in Iran! Fucking Iranians! Sand niggers, and towel heads! They’re barely human! Monkeys! Sand niggers!”

Shorty and Hairy agreed that Kao San was just a block down, but I was skeptical. I’d been ripped off by Israelis once before. I was expecting it, I must admit. But I figured, for the entertainment aspect of it that it was worth a couple extra bucks and inconveniences. For all the trouble Israelis always seem to create, there is never a dull moment. Stories need conflict in order to be entertaining. Nobody knows how to create conflict like an Israeli, except maybe a Palestinian.

We all got out. The driver got out too. I pulled out my wallet, bowing and smiling appeasingly to the driver. But he didn’t seem to see me. He was shuffling towards the Israelis, shoulders squared, fists squeezed, silent, ready for action. The Israelis hid behind me. They whispered in my ear that they preferred I handle the transaction. They handed me the money from behind me, and turned and left without a word.

I was left chin-to-forehead with an angry Thai taxi driver. I attempted to hand him the cash but he was not focused on the money. He said, “You wit dem?”

“I wanted to split the fare to Kao San.”

“I will pay you for the ride to Kao San. I am sorry. They’re assholes. I didn’t know they would be assholes.”

“Dey pocking Israeli!” he spat out. Then he lifted his balled up fists and showed me why he couldn’t take my money. He had brass knuckles, with blades, in both hands. They were wrapped with tape, and looked to be well-used. “You Israeli?” He asked.

“Oh Hell no! I never even been to New York! My wife is Korean! Ahn young ha sey yo! See?” I pulled out family pictures. He relaxed a little, and returned the greeting. Then he opened the door for me and took me to Kao San. He charged me extra – five bucks. But it was worth it I think. Most exciting taxi-drive I’ve ever had.