Home Asia Calling of the Souls, An invitation to a Laos Baci Ceremony 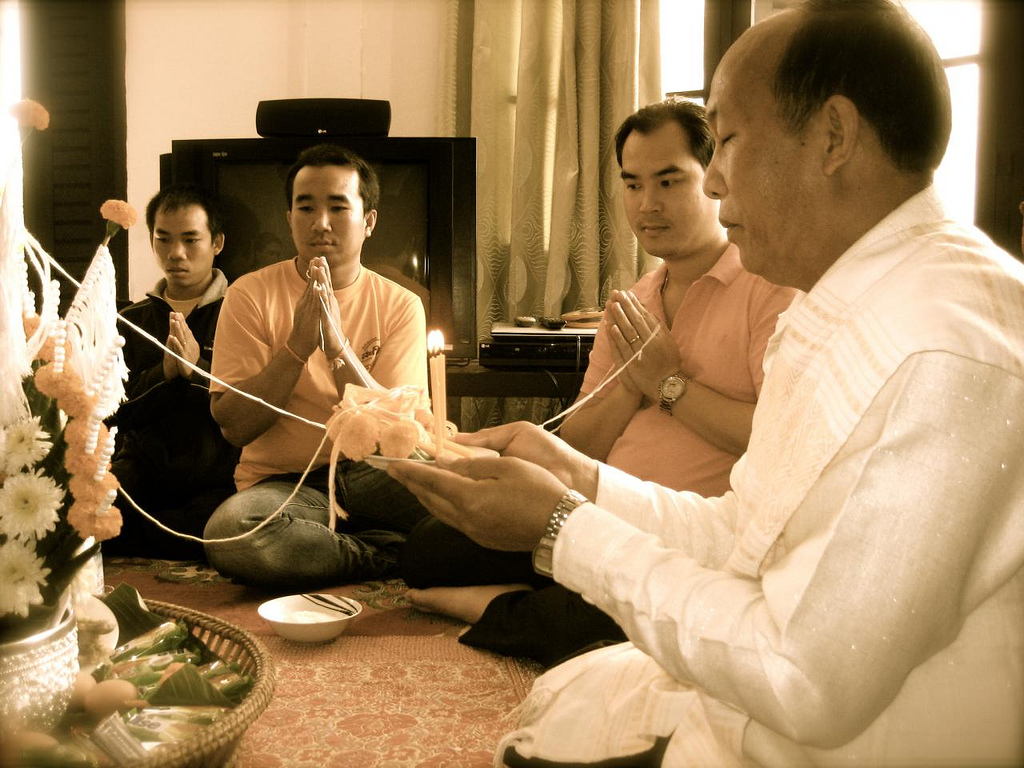 The room is mostly dark. Made entirely of wood and bamboo, high upon stilts to avoid the inevitable rainy season floods, and with no furniture at all, the room’s windows are just big enough to let in shafts of light illuminating the room’s focal point: a beautiful arrangement of jasmine flowers, food and gifts known as the Pha Kwan.

The room is packed full of people. I find myself pressed up against men, women and children of all ages: from a new born baby to the village elders. Its’ stiflingly hot, and the fragrance of the jasmine flowers and sweet sticky rice clings to the humid air. The mood is solemn, but there is noise all around me: the indistinct chatter of people talking in a sing-song language alien to my ears; babies wailing; and impatient children pestering their parents.

An elderly man, known as a Mohkwan, enters into the foray and a hushed silence descends. He kneels behind the Pha Kwan and invites everyone in the room to lean forward and place their hands upon it. The ceremony is about to begin.

I am in Laos, the poor but beautiful country surrounded by Thailand, Cambodia and Vietnam in South East Asia, and I have had the honor of an invitation to the Baci Ceremony – one of the most important religious rituals in Lao culture.

The ceremony, sometimes called the Su Kwan, or the Calling of the Souls, is a syncretistic mix of Buddhism and tribal religion in Laos, and points to the strong vein of Animism that runs through the country. It is held to mark special occasions, such as weddings, births, welcomes and departures and runs deep in the Lao psyche.

In Laos it is believed that the human soul is made up of 32 components called Kwan. Translations fail to capture entirely what the Kwan represent in Laos – in simplistic terms, they are spirits that watch over the 32 organs that are believed to make up the human body. These spirits can wander off from time to time, leaving parts of the body exposed to illness or bad luck, and it’s therefore vitally important that they are all present and accounted for during significant events.

The Baci Ceremony calls the Kwan from wherever they have been roaming, ensuring they are back with their rightful owners and securely in place so that equilibrium can return to the body.

With our hands all striving to make contact with the Pha Kwan, the Mohkwan begins to chant a Buddhist mantra. The heat in the room becomes almost unbearable as he rocks back and forth and calls upon the souls to return. There is an atmosphere of reverence and seriousness as the ceremony proceeds.

Once the invocation is complete, the Mohkwan takes up the gifts from under the Pha Kwan and places them in the person of honor’s hands – a villager about to embark on a long journey.

All around the people in the room lean forward and take pieces of bright orange string to attach to the wrists of the ceremony’s recipient, chanting as they tie the string and small amounts of money onto him. The strings are used to attach the Kwan firmly to the person, and must not be removed for at least three days or until they fall off naturally.

As a falang (the Lao word for foreigner), I am treated as a special guest. Small children surround me, desperate to tie string to my wrists, and the village elders wait patiently to offer me some of the fiery Lao Lao – a potent alcoholic drink brewed from rice wine. Despite how poor the village clearly is, the hosts are keen to share everything they have with me. The food from under the Pha Kwan is blessed and passed round the room, and villagers eagerly hand eggs, fruit and bread to me, insisting that I eat them to bring me good luck. I am surprised by how pleased everyone seems that I am with them for the ceremony, when in truth it is I that am deeply honored to be a part of their ritual and recipient of their boundless hospitality.

And then, with little warning, the ceremony is over. The mood changes drastically and a party atmosphere descends. We climb down the stairs to find a table laid out with a delicious Lao feast prepared for us, and plenty of bottles of the ubiquitous BeerLao waiting to be consumed. The meal is shared between everyone in the small community: we use our hands to eat and drink out of the same glass. Laos and Thai pop blast from a loud speaker and before I know it a party is well under way – a party that lasts until the beer has run dry and the food has been finished.

In the two months that I have been in Laos, the Baci ceremony has been one of the most special and unique experiences. For me, nothing else so magically expresses the nature of the Lao culture: the emphasis on family and community, the generosity, the spirituality and the love of a good party.

What not to do in a thunderstorm, c