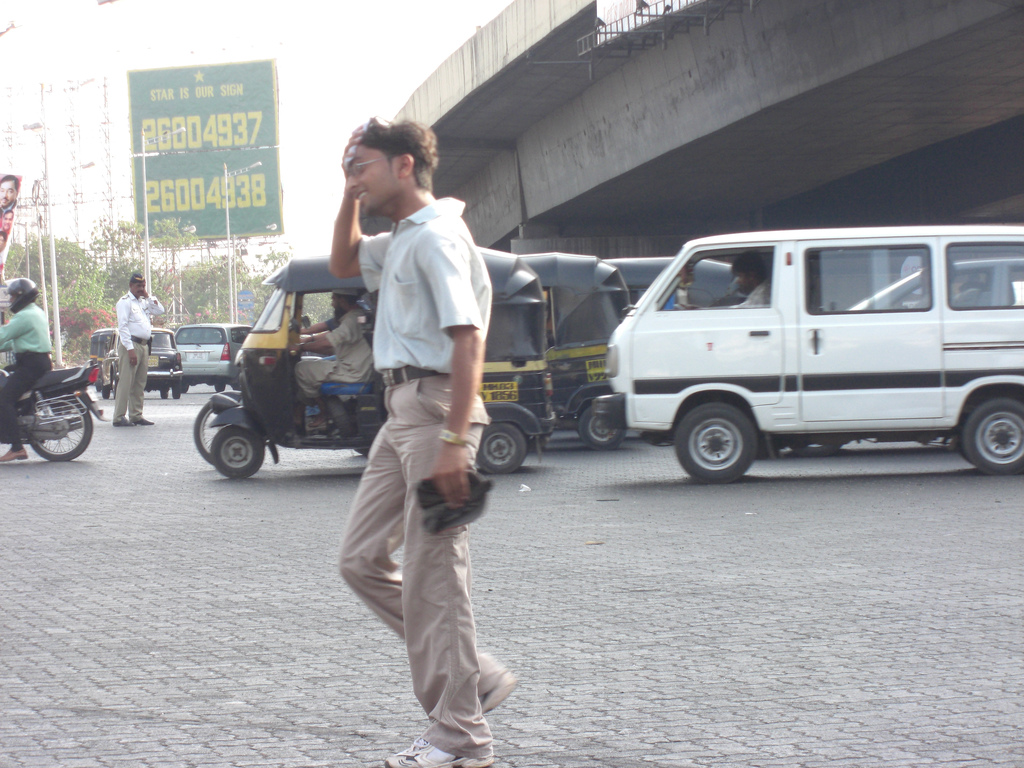 As I was brushing my teeth this morning trying to use bottled water I was disturbed to see that my spit was black. We’ve been in India for about 24 hours and I’m spitting blackness…awesome! Nicole and Laura experienced the same thing. Suddenly everybody is wondering what we ate last night, and how long we have to live. As it turns out good old pink Pepto-Bismol tablets turn your tongue black. The advice we had gotten was to take Pepto after each meal regardless of how we felt if we wanted to avoid Delhi Belly, so last night we had popped a couple of tablets. It was an interesting morning. We checked out of our hotel and headed out into the environment.

Bombastic Bombay, Bombay (now known as Mumbai) is awesome, but getting here can be difficult to put it lightly. We took a cab ride (a non-air conditioned taxi cab) to the Colaba district, the “most happening district” in Bombay according to Lonely Planet. This cab ride almost broke me, and I like to think of myself as a very capable and durable individual. I’ve spent a month backpacking across Death Valley, but that was nothing compared to this 2hr cab ride. We had flown in from Delhi last night on an extremely fast paced trip around India. Five cities in five days, this was day three and city number four. We started in Chennai on Sunday, flew to Kolkata (Calcutta) that day, spent 25 hours there, flew to Delhi caught a train to Agra, saw the Taj Mahal then back to Delhi that night for our flight to Mumbai. Arrived last night around midnight and made the mistake of getting a hotel near the airport instead of taking what would have been a 20 minute taxi cab ride into downtown at the time. We’d been flying each night for the past two nights, and decided it’d just be easier to get the closest hotel…one little mistake.

We didn’t eat breakfast and were slightly hung over from the night before, drinking in Delhi. I now fully understand the phrase “sweating bullets”; I was watching sweat drip off my arms as we sat in the taxi in stopped traffic marinating in diesel exhaust (had my sweat been collected I’m convinced it could have been used as a fuel source). While Indians are bigger people than most Asians, they’re still nowhere near my size—which means neither is the transportation. Public transportation and general life is still small compared to me at 6′ 3″. I don’t really fit on the airplanes, nor do I fit in the taxis, at least not very well. I feel more like a crumpled up piece of foil. When seated my head hits the roof, so I am forced to slouch, but then my knees hit the dashboard or front seat depending where I’m sitting. Then figure in the stop and go traffic and nice smooth driving of our taxi driver and you’ll get an idea for my situation. Ever felt like there are bugs crawling on the back of your legs or arms, not for any particular reason, but you get that tingling sensation when you imagine that something is touching you or running down your leg? It was so hot that every part of my body was literally dripping sweat. Now don’t forget I was already hung over. I was wearing one of the knock-off t-shirts I had bought in Hong Kong; it had a graphic on the front that melted to the cracked vinyl seats in the cab because of the heat. When we got out of the taxi cab my shirt stuck together, and when I pulled it apart, the label fell off. The thermometer on my backpack read about 110 degrees plus humidity—plus pollution. Humid pollution is a formidable adversary. It was like being in a diesel filled steam room. Car pollution was all we had to deal with until we came to the slum. Mumbai is home to Asia’s largest slum—take a moment to think about that, the largest slum on a continent with nearly 3 billion people. Out of all the other major cities and their slums (think China), Mumbai has the largest slum. We had the distinct experience of crawling through it on our way to downtown Mumbai. As you might imagine, it added its own taste to the diesel steam room we were already experiencing. The stench of rotting accented the diesel in a way I am struggling to describe. I can barely begin to describe the visual stimulation—the smell and feel were already tremendous. My back felt like it was in a Rain-X commercial; sweat was dripping down my back faster than I could count the droplets. My belly button had filled up with sweat from my stomach and chest. Normally I really don’t sweat that much, especially when I’m already hung over and dehydrated—it was intense. Certainly one of the most unpleasant situations thus far—the train ride yesterday didn’t come close to this 2 hour cab ride. Over those two hours in the cab we covered less than 30km (18 miles), the traffic was that bad. I was sitting shotgun and the girls were in the back seat, occasionally I looked back at them and forced a smile, but this situation was incredible. I have never felt so uncomfortable—and I’ve been in some dirty situations before, but nothing comes close to this experience. At the end of the taxi ride I was simply impressed. I had never imagined I could have been so uncomfortable on so many different sensory levels all at the same time and for such an extended period of time. I mean there was no escaping it. The air was so thick I could taste the pollution in my mouth and while the rotting smell invaded my nose I was sweating across every inch of my body—all while being shocked at the living conditions of hundreds of thousands (probably millions) of people as we drove threw the slum. I had nothing left, I simply could not experience any more. For the first time in my life I was on serious sensory overload.

Back to Mumbai being awesome…Mumbai is awesome; it is probably my favorite city of the five we have visited. While it is home to Asia’s largest slum, it is also the cleanest city (or the portions we experienced) and best smelling. The colonial influences are very strong, particularly in the architecture. Some of the buildings have been restored and maintained while others are being over grown and molding. The stark contrast between modern buildings sandwiched in with the old really makes Bombay a unique scene. The massive government buildings built during the British colonial era are spectacular. Those that have been maintained look incredible, the grandeur is unrivaled in any of the cities I have visited across India.

India is the only country I have experienced which embodies the full spectrum of human existence. Imagine if the ‘spectrum of human existence’ were somehow graphed on a yard stick. (I know I’m getting a little philosophical here, but bear with me). One end of the yard stick represents the uneducated (by modern/western standards) and, “uncivilized (to use a colonial word), rural people say for example the Aboriginals of Australia. The other end being the most developed people, the uber educated, developed, modernized, civilized people like the 100 richest families in Europe (Europeans seem to be better educated than the good old USA). Most countries embody a few inches maybe even a foot of space on the yardstick spectrum. The USA or Europe take up some of the least space, the difference in quality of life from the poorest to the richest isn’t nearly as drastic as in most 3rd world countries. India however has the entire spectrum; homeless people in the States that beg for money have an income equivalent to the middle class in India. Our waiter told us that he earns 60 rupees per day on a 12 hour shift—that’s about $1.25, that’s a little over 10 cents an hour—and most of his tips go to the restaurant, not to him. Now that doesn’t make sense to me, I think we most have lost something in translation, it doesn’t seem like that would be enough, even for India. His meals were provided by the restaurant and I think they might have provided a room as well, but we weren’t able to understand each other very well. It was a pretty decent restaurant too, not expensive by any American standards, it was air conditioned and the food was good. It is bizarre to watch children sleeping on the street on cardboard with no blankets (not that you’d need them because it’s so hot, but still) as a new Mercedes S500 drives past. According to one pamphlet I found: 20 million people will live and die in India without ever having a roof to sleep under. On the other end of the spectrum India is also home to some of the world’s richest families. Being able to actually see the diversity is extraordinary—you can find just about everything in India.

It’s Raining In London, So What Do You Do Now?