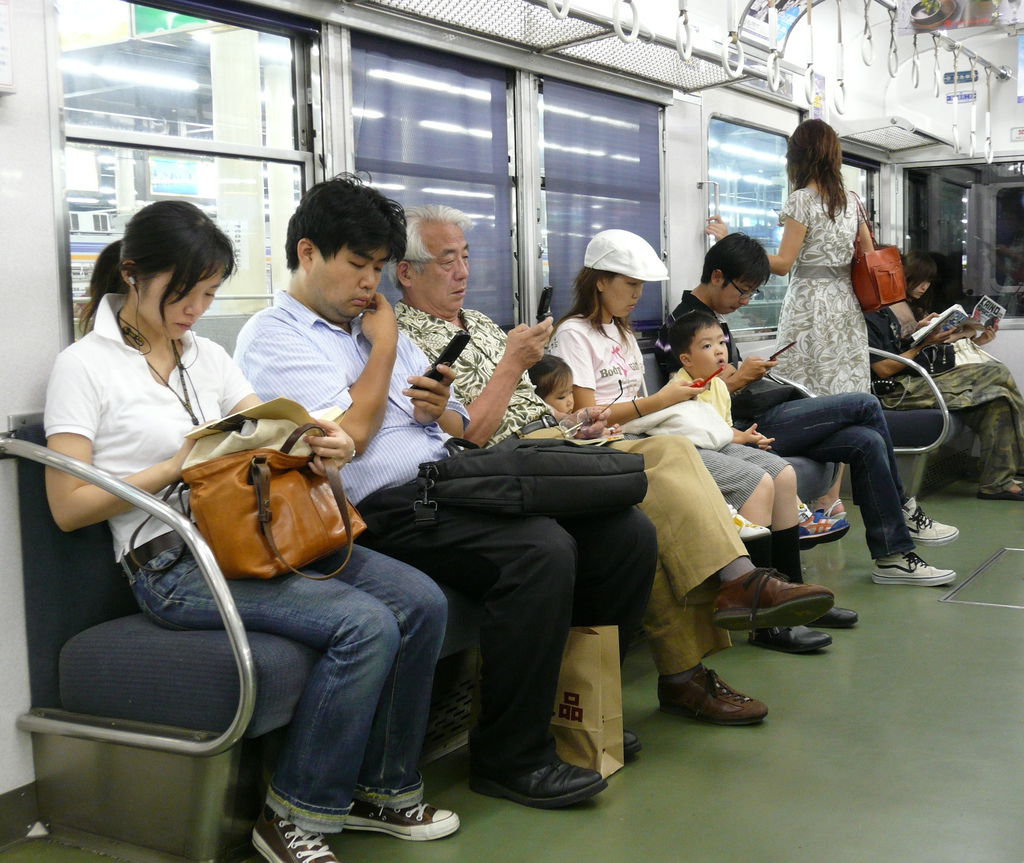 According to my Japanese Antiquity notes, there was an emperor Keitai, who reigned from approximately 510 until 527. I don’t know anything else about this emperor, other than he actually did exist (Japan, in their quest to prove that their imperial lineage was unbroken, made up a good nine emperors, and taught it as straight fact until after World War II), but whenever anybody mentions poor emperor Keitai, everybody giggles.

While I’m sure that the kanji is different, keitai is the term for cell phone. The etymology isn’t too hard to figure out: keitai literally translates as “mobile,” and the full name of a cell phone is a keitai denwa, or “mobile phone.” Of course, many things in Japan are keitai, but I say keitai, you say “overpriced ringtone.

Along with everybody having a cell phone, comes cell phone etiquette. And considering how I have enough material on cell phones to be writing this, it’s quite extensive.

As an aside, I hate cell phones in America. I have one of course, everybody I know has one, even my grandmother. I just never take mine with me anywhere. I get yelled at constantly at home for leaving my cell phone on my desk next to the landline. What, they yell, is the point, damn you?

Well, the point is I don’t want you to contact me that easily. I don’t have to be at everybody’s beck and call every minute of every day. So nyah.

But in Japan, I always have my keitai. I charge it faithfully every night, take it dutifully with me wherever I go. Part of this complete flip flop in opinion is probably due to the fact that, where I live, I don’t have Internet access. This is difficult, as I’ve had the Internet in my American home since I was in sixth grade, and had an Internet-capable computer in my room since the beginning of high school. That’s about ten years of the world at my fingertips, and seven of them with it mere steps away from my bed.

But living in Japan there’s no easy Internet connection, so my connection to the world beyond my bonsai garden is through the cell phone. Internet isn’t nearly as prevalent here as it is in the States, judging from conversations with my fellow expats, less than half have Internet (and some don’t actually have it in their house; they steal it from an unprotected wireless network that’s somewhere around), and nobody has more than one computer. At my American house, we have four. At my college, I only know of one person who doesn’t have her own personal computer, but, of course, her roommate has one. And all the dorm rooms are wired for Internet.

So, deprived of my cyberspace addiction, the obsession turns onto the next available piece of communication hardware: emperor keitai.

Japanese cell phones are bigger than American phones, and also heavier. At first I was surprised, being that Japan is the motherland of all things compact, and wondering how the hell that America, home of the ten-gallon cowboy hat and the Super Ultra Big Gulp, managed to surpass Japan in anything tiny.

The answer here is devastatingly simple, once you realize how cell phones are actually used in Japan. Nobody actually uses a cell phone to call anybody else, you foreign twit, everybody texts.

In America, I might text somebody occasionally. But usually, if I want to get a hold of somebody, I’ll actually look up the number and call. Not so here. Any place you find yourself in Japan, people are hunched over their keitai, fingers flying over the keypad, kana reflecting in their eyes as they launch screen after screen of silent communication across the islands.

The phones have to be larger because larger keys make it easier to type, and the larger screens actually let you see what you’re typing. I’m becoming quite adept at typing on the number keypad in both English and Japanese, though I don’t think I’ll ever be as good at it as the Japanese are. It’s not uncommon to see somebody biking down the street while texting on a cell phone. I once saw a woman biking down a main drag with two children on her bike, puffing on a cigarette, an umbrella and the handlebars clutched in one hand, texting on her cell with the other.

Probably the main reason why texting has become so popular is that, at least 99% of the time, actually talking on the cell phone is rude. Which, frankly I see the merit in – who hasn’t sat next to somebody in the States screaming their personal problems out to their phone while you pretend not to hear? The huge keitai taboo is taking a call while on public transportation. Technically, it’s illegal to use a cell phone on public transportation at all, but everybody breaks the rule in regards to texting. But actually talking? Perish the thought. Immediately. In fact, it’s probably best if the thought perishes before you even think it.

On trains, usually the first and the last train are “no cell-phone zones,” where the no-cell phone rule is actually enforced, and you have to turn off your cell phone completely when you enter. (Supposedly, cell phones affect pacemakers or something, because all the elderly people get in the first and last cars. I don’t know if this is true or not, but if it is, I guarantee somebody’s going to sue some cell phone company in America over it.)

I don’t enter these cars, because I’ve happily adopted the time-honored Japanese tradition of texting on trains. I do, however, put my phone on “manner mode,” which is basically the equal to “vibrate.” Texting on trains is okay, but ringing phones are not. If your cell phone rings audibly on public transportation, you may as well start looking for something to disembowel yourself with. It’s the only way to redeem your honor.

One of the things I’m constantly amazed with is the incredible reception Japanese cell phones have. While at school in America, I always call from Massachusetts to Michigan on my cell, and as for the amount of dropped calls, well, numbers the stars. I blame it on the mountains that dapple western Massachusetts, but the mountains in Massachusetts are hardly blips on the radar compared to the Japanese variety. You even get reception in the subway, which I find absolutely astounding. I have a hard time getting reception in my dormitory in America, and that’s not even underground.

Alongside Japanese rules comes Japanese fashion. I have never seen as many different styles of cell phone as I have in Japan. I actually got a new cell phone right before I left the States (seems counter-intuitive, but I have a family plan that made it equally as cheap for me to renew my plan as it was to drop it, and this way I got to keep my number), and unless I wanted to put some organs up on the black market to pay for it, the color selection was absolutely dismal. (Gray, or gray?)

Not so here. Virtually all the phones are flip phones, owing to their large screens, but there is a smorgasbord of colors and styles. There are rounded phones, square phones, striped phones, dotted phones, starred phones, Hello Kitty phones, outdoorsman phones that are virtually indestructible, and I guarantee any possible color you could imagine, from ochre to mauve.

My cell phone is white. Not incredibly exciting, but I wanted a bilingual phone, which notably cut down my choices. This doesn’t matter much, though, because I could add any sort of color imaginable with suturapu.

Translated, that’s “strap,” and it refers to the charms you can hang off the back of your phone. These haven’t really taken off in the States – I see them occasionally, and I even had one swinging down the back of my old American phone (the strap was from Japan, of course), but my new American cell phone doesn’t even have a notch for them. This is unthinkable in Japan.

Cell phone straps are popular to the point of lunacy here. I only have one, with my Japanese college’s logo, and this is very, very, very conservative. The only people I’ve seen that have no straps on their cell phones are fellow foreigners. Most everybody else has at least eight or nine, and I swear on a stack of Beatles LPs that that’s no exaggeration.

It’s very amusing to see a salaryman, dressed in dark suit and tie, frowning down at his electric orange cell phone with so many dangly things off the back that it’s a wonder the cell phone is still, well, keitai. But, hey, welcome to Japan.

Though I’m slowly becoming used to constantly sticking out in Japan, the times when I feel most assimilated are when I’m standing on a train, keitai in hand, furiously typing away with my thumbs. If I’m just hanging out on a train platform with my hands in my pockets, I’m probably a tourist, who has absolutely no clue what’s going on. If I have a cell phone, I look as though I’m a permanent fixture. I’ve actually been mistaken for a Japanese before, once, on a train platform, when somebody asked me for directions while I was texting. Of course, I didn’t have the vocabulary to help, but he seemed shocked when my clumsy Japanese responded to his question. I had a keitai. Clearly, I was on the up and up.