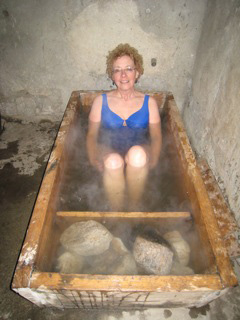 PHWATTT!!!! The Mercedes hurtling at 140 km an hour across the Afghan desert has suddenly plowed into an unexpected four-foot wall of gravel. A thousand pings follow as pebbles and sand shower us. The dust clears and we find ourselves perched precariously on the pile facing a lonely stretch of road 30 km from Herat. Over the week we have become increasingly wary of our kamikaze-style Bhutanese driver. Bodyguard to the Prince of Bhutan, he had approached us in Munich to ride along to help him negotiate traffic. It took seven local men to lever us off back onto the road. As this was our second harrowing accident, we exited at Herat with no regrets. The year was 1972, I was 23 years old, and one of thousands of hippies on the road Kerouac-style.

[quote]After three days, five of the seven women in adjoining trekking parties are forced to descend due to altitude sickness and inadequate conditioning. An ominous sign.[/quote]

But life has a way of circling back. I read recently that Lindblad, father of ecotourism, led the first group of tourists into primeval Bhutan in 1974. I could have been that first visitor if I had continued pressing east back in 1972. So at age 62, I decide to finish the adventure before I become too decrepit or become an inevitably engaged grandmother.

My first trip is a cultural journey in 2010, thoroughly enjoying the dzongs (medieval fortresses converted to monasteries and government offices) and festivals. But when I gaze up at the mist-shrouded Himalayan range, it evokes my years of backpacking in solitary wilderness. I ask myself, “Why not?” and book a return trekking trip.

Although perennially gung-ho, I have a touch of trepidation about my physical capabilities, so I become a YMCA junkie, exercising six days a week for 1-1/2 hours of strength training, jogging and “boot camp.” Everyone else appears to be in their late 30’s. Soon, I feel and look better than I have in twenty years, so there are side benefits. I’m ready.

There are several reasons for the seasoned traveler to choose Bhutan. The Himalayan wilderness is pristine, sparsely populated and because of the elevation change from 300 to 24,000 feet, it is one of the world’s top ten biodiversity ecosystems. Under the Bhutan constitution seventy percent of the land must remain forested. Tourism is intentionally kept at a manageable level by levying a $200 per person per day all-inclusive fee, and you must travel with a Bhutanese tour operator — to protect the environment as much as the tourist.

Buddhism is pervasive not only in daily social interactions (one gains merit by acts of kindness) but also in government policies that measure progress by a “Gross National Happiness” quotient. The West has touched but not yet spoiled Bhutan.

Internet and TV technology were introduced in 1999, with cell phones following in 2003 and now in widespread use. Even the yak herders have cell phones, which is practical, and the favorite TV show for the monks is professional wrestling, which they view as a “strongman contest.”

The people are open, friendly, peaceful, and cooperative. They hold fast to their ancient culture, wearing traditional dress during office hours. My friend Jambay tells me they do this “for law, for love”. The entire country numbers only 700,000 people in an area the size of Switzerland, and most live in rural hamlets or farms. As such, “small-town” gossip, good-natured teasing, and yes, even flirting abound.

“Trekking,” or walking is still the main form of transportation in Bhutan outside of the main cities. Only 10% of people have cars. There is only one major highway, and the buses between the main cities of Paro and Thimphu run only twice a day. So people “trek” to school, work, and the market on a daily basis.

Wilderness trekking is like backpacking, except you carry only a daypack. I select the Druk Path Trek, a moderate traverse from Paro to Thimphu. I am dropped off with my gear at the trailhead in mid-March. When I meet my entourage I feel rather silly as a single woman juggling not just an English-speaking guide but also a cook, assistant cook, horseman and five pack ponies.

The first day is a 1000 meter climb through forests of golden moss. My guide’s cell phone is ringing constantly while we move up the trail, and I’m getting annoyed. He explains, “ My girlfriend is afred dat I will get wid you in de tent.” I sputter, “What??? Tell her I’m old enough to be your mother.”

I arrive at camp surrounded by gorgeous rhododendron forests—all shades of red, pink and white. Ringed around my tent are my pack ponies who are cropping tender new grass shoots. Another morning, a horse “alarm clock” awakens me — loudly munching breakfast oats from his nosebag three feet from my head. You have to love horses to go on trek.

The first night we camp in a Tibetan-type plateau, with grainy dust seeping in, covering our biscuits and wafting into our tea. Minjou, our cook, strips rhododendron branches and spreads the leaves around our dining tent floor. The dust clings to the broad, slightly sticky leaves instead.

We climb back up the hill to Jele Dzong and are blessed by solicitous monks who place protective yellow string loops around our necks before we head out. The rock fields, the aftermath of many slides, becomes tougher to negotiate. I have to continuously watch my foot placement.

The following day, the trek takes us across lush green meadows with occasional prayer flags and stupas (square stone worship pillars), plus a picturesque mountain saddle where you get a good view of 24,000 foot snow-capped Mt. Jholomahari towering in the distance. We eventually arrive at a clear, luminescent green high mountain lake, Jimilang Tsho (Sand Ox Lake) reputed to contain very large trout. But as devout Buddhists, my team members cannot kill any sentient being, which includes fish, flies, and even mosquitos. So no one fishes, and I am too tired to try.

After three days, five of the seven women in adjoining trekking parties are forced to descend due to altitude sickness and inadequate conditioning. An ominous sign.

My guide Sonam is quite charming and attentive once we lose cell phone transmission, although he shellacks his hair every morning with gel to get it to spike straight up. A popular hairstyle for young men, I suppose. He helps me spot native birds and identify myriad flowers. We observe massive yaks pasturing near towering stone yak herder huts that are soon to be occupied. On the third day, I too, succumb to altitude sickness at about 11,500 feet, cursing myself for ignoring preparatory directions. Minjou makes a concoction of black tea, cardamom and garlic to soothe my stomach, but it has little effect, much to his chagrin, and mine.

By morning, I feel better, and we tackle some residual ice and snow crannied in huge boulder fields. Being from Minnesota, I feel confident in the familiar conditions. We’re above 13,000 feet now and I am moving more slowly and breathing harder. After all, I am a flatlander.

The last haul is a lengthy, steep, 6,000 foot descent. We see two families of yak herders coming up the trail to pasture their animals for the summer. The elder woman learns that I am 62 years old like her, and this is reason enough to come over and talk. We motion to all our body parts suffering aches and pains and nod in sympathetic agreement. She confides that she would like to give up herding, but her children are still in school. Then she comes closer and asks, “Am I beautiful?” I snap her picture, snaggle toothed and all and show her the viewfinder. “Yes, you are beautiful”, and she smiles.

After finally passing over several kilometers of enormous, deeply gnarled tree roots, I emerge to find my “town” guide. What did I accomplish? Ascent to 13,800 feet, elevation change of 5,600 feet, and a distance of 60 km (37 miles) over mountainous Himalayan terrain. No injuries not even blisters.

I finish the trip with the Bhutanese version of a Bed ‘n Breakfast — a “Farmhouse Stay with Hot Stone Bath.” It is a working farm so the baths are water-filled horse troughs with a dividing board to keep the hot stones piled in front. Very relaxing after an arduous trek. Rice wine, popped corn, millet and rice are served afterwards with tea infused with raw cow’s milk.

Back in the States, I resume my rigorous exercise regimen. “Boot camp” has a grueling circuit course today, and while I manage the kettle bell swings, the sideways “grapevine” run trips me and CRACK!!! I fall onto the back of my head. Dazed, I don’t grasp the extent of my injury. Three days later I’m doing crunches and fall sideways, the room spinning violently. My doctor gently chastens me — I have a concussion and vertigo. While I am sentenced to LEISURELY walking for now, I feel an obscure Yeti trek in Eastern Bhutan beckoning.