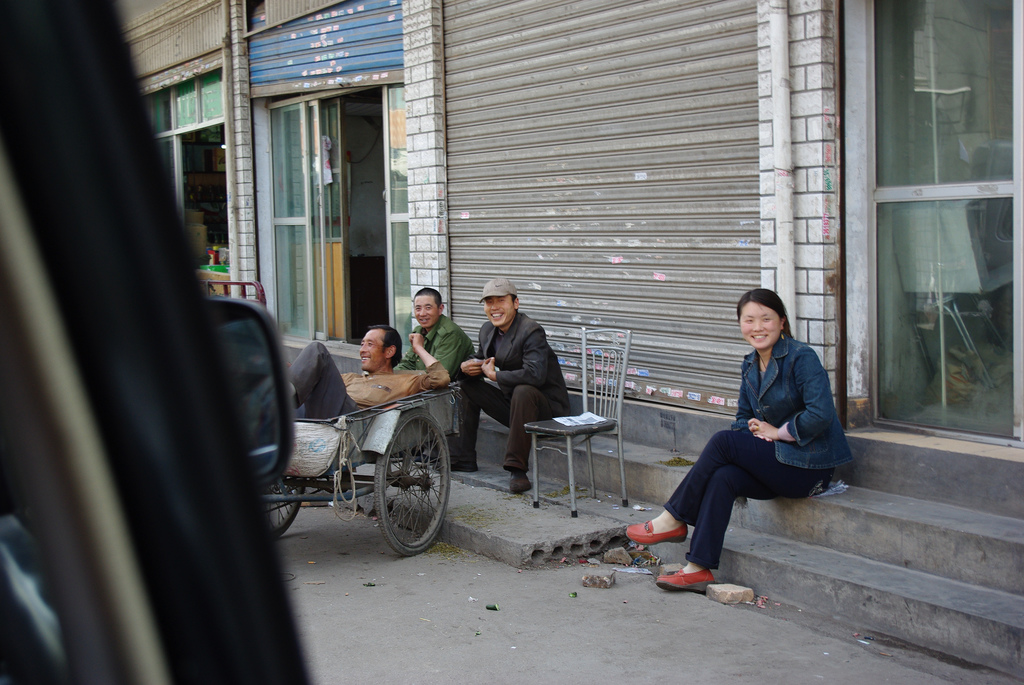 Li-Po had left Xining once in her life. This was that once. We were on the train from Shanghai and had been eyeing me cautiously for most of the journey. Two hours to Xining, she offered me a cucumber and told me to eat.

[quote]Here the fish had been replaced by scores of uniformed girls. They beckoned me inside, flashing smooth, brown thighs and smiling coyly. A suited man was ‘checking-out’ at the desk.[/quote]

‘Chi, chi,’ she said. Then, putting one finger to her lips, she sought the word in English. ‘Eat,’ she said, satisfied.

I ate my cucumber and we chatted. I told her I didn’t yet have a hotel booked. ‘You need to be careful,’ she said. ‘There are a lot of bad people in Xining.’

I didn’t believe her for a second. The monks strolling the station approach made the town look childish and casual. They were silhouettes against the grey, unfinished hotels, walking beside and between the white-capped Muslim men, and the purple headscarfed women.

Li-Po had recommended the Green Bar Inn – a nearly-nice hotel on a roundabout exit. She said she worked there and that it was cheap. It didn’t look it from the outside. It was big, and had the foyer of an international chain. Two large fish tanks flanked the check-in desk, and there were signs and prices in English. The clocks on the wall told the time in Tokyo, London and Beijing.

I looked at my room key, which was either 316 or 516. I went to the third floor and found a really run down reception. Here the fish had been replaced by scores of uniformed girls. They beckoned me inside, flashing smooth, brown thighs and smiling coyly. A suited man was ‘checking-out’ at the desk.

‘Wrong floor,’ I muttered, and left.

That evening, I wandered the night market, pointing at silver bracelets and Tibetan prayer wheels, asking how much and declining to purchase. I bought raisins, almonds, yogurt and cucumbers from the vendors before sitting down to eat.

I had picked up a local friend while shopping. He said he was a soldier and asked where I was staying. I told him it was the Green Bar Inn, and he smiled.

He ordered us lamb kebabs and naan bread, paid the bill and we walked to my hotel.

‘Goodbye,’ I said, standing outside the Green Bar Inn. He looked surprised.

‘Okay,’ he said then added, pointing to himself: ‘Third floor.’

We shared the lift and said goodbye at the fishtank-less foyer. As the doors closed, I watched him bounce into the mass of red-faced, smiling Chinese girls. I sighed, hesitated, and finally resumed my journey to the fifth floor.

By the time I reached my room, I was almost decided. I opened the door and looked at my crappy bed and my shitty TV. It had seemed so bright down there. I took off my shoes and headed back down in my socks.

The girls were still waiting.

I shook my head.

‘Just give her this,’ I said, handing her a small cucumber.