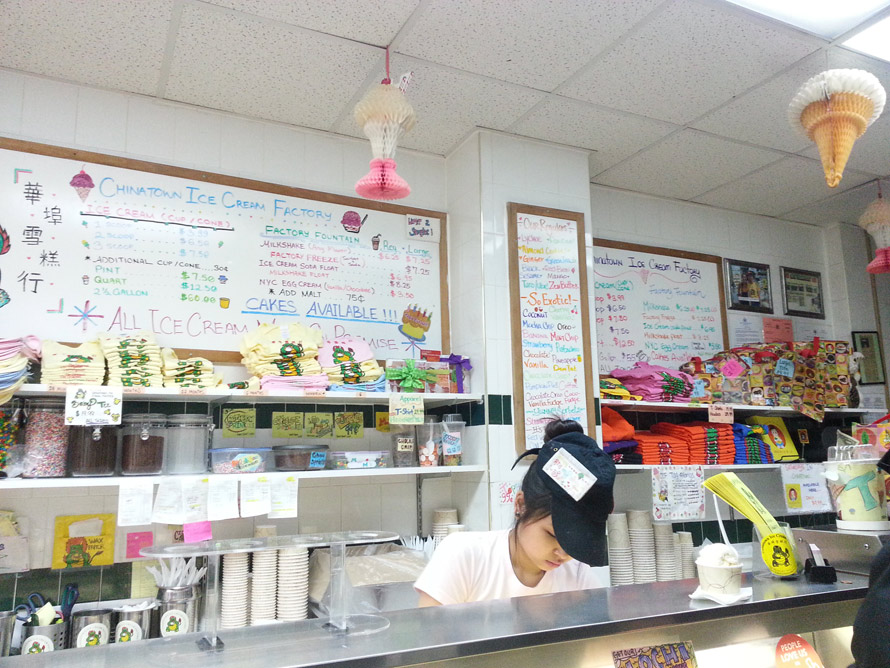 It’s no surprise that businesses both big and small dominate Chinatown. After all, the first immigrant claimed to have arrive in the 1840s was a Cantonese businessman, Ah Ken, who founded a cheap cigar store on Park Row. Ken rented out rooms to the few Chinese immigrants who came and employed them to work as “cigar men.” And, it is speculated that Chinatown slowly grew around this smoke shop.

As my friends and I got closer to Chinatown, we noticed more shops changing. John’s Pizza became Miànguǎn written in traditional Mandarin. La Tagliatella written in a white, obscure font on sleek black banners and a dimly lit interior changed into No. 1 Chinese – Sushi, Korean, Thai on neon signs with bright interiors and a textbook restaurant layout. “Done eating? There’s nothing to see. Move out.” must have been their motto.

Then finally we were there. Chinatown, Manhattan is home to the most Chinese people in the Western Hemisphere. And it was easily evident here where the city comes alive. We were greeted by street vendors selling melon slices on a stick, fried dumplings, cases and trinkets for cellphones, t-shirts that say FBI, CIA, SWAT, NY, DC, or whatever ABCs tickled our fancy.

One of the first things we noticed was a maroon red Verizon billboard towering over the first lukou (‘Or was it still just “intersection” since we were in the United States?’). It stood out for its size and bright color (red is the favorite color of China signifying good luck; hence its flag); Verizon was indeed lucky. It blended in well with all kinds of stores with store names also printed on red signs.

He seems to sigh and give his phone one final look before shoving it into his jean’s back-pocket, but then his sigh instantly transforms into a cheerful grin.

My friend and I were supposed to be at a banquet held at Golden Unicorn Restaurant, which happened to be next to No. 1 Chinese Restaurant. This reminded me of the much smaller No. 1 Chinese Restaurant that I found near Ohio State University, but told to avoid if you valued your intestines. I wondered briefly if this grander, multi-storied No. 1 Chinese Restaurant had any connection with the one in Columbus. I would quickly find out that even though both shops had their names printed on a white sign in bright red all-caps lettering, they were probably not related at all. The stores in Chinatown – that is the ones that are native to it – are direct and to the point. There is no Caseus, Chipotle, or Mory’s; it’s No. 1, Number 1, Steamed Dumplings Shop, Best Noodle House.

But there was a McDonalds! The yellow arch on another red sign was universally recognized. It most likely served as a haven for those who couldn’t decide between two noodle houses right next to each other. The cashier had black, thick-rimmed glasses on. Around five feet tall, black hair, black eyes, and some things that an East Asian would easily be able to identify him as a Chinese male in his 20s rather than Korean or Japanese. He had a clean white polo on with a golden name badge and a blue visor – all illuminated under the brightly colored photos of hamburgers and French fries. After a family of three had finished ordering and moved to the side of the counter, my friend walked up to him. His cheerful smile slowly contorted into a rather rigid expression until he blurted, “What?” It must have been the first time a cashier at Mai Dang Lao needed to have a simple order of a Big Mac meal repeated. Perhaps it was the fact that my African-American friend was trying to order in Chinese that threw him off guard.

Read more Funny travel experiences from travelers like you!

The cashier at McDonald’s smiles as my friend orders again – in English this time. The cashier confirms: “So, a number 2?” “Dui,” my friend responds. The cashier just nods as he flashes a grin counting the change – hoping that what my friend said was “Yes.”

Next, we enter a rather modern looking café amongst all the “Best” and “No. 1” shop. It’s going for a hipster vibe – pipe exposed ceilings, dimly lit interior, a menu on a chalkboard. In fact, for Silk Road Café, the entire storefront is glass (à la the Apple Store). From the outside, we see a healthy mix of young Chinese couples and tourists, who must’ve been eager to find something that seemed familiar. Although I doubt they have never seen a Silk Road Café in their lives before, certainly, the design of the shop must have been familiar. There are subtle reminders that I’m still in Chinatown: a painting depicting Chinese mother and a baby and some ornamental tea bags with gracious strokes of Chinese calligraphy applied on them. The menu is written on a black chalkboard with Chinese first and then English in parentheses. The café owner sitting on his bar stool in front of the register looks up from his smartphone when he sees us. He seems to sigh and give his phone one final look before shoving it into his jean’s back-pocket, but then his sigh instantly transforms into a cheerful grin. His short black hair is spiked up, his eyes glimmer, and I’m sure he’s heard from some foreigners, “Aren’t you that one Asian guy from that TV show?” He’ll probably smile and say, “We just have the same hair style.”

Quickly scanning the menu yields a lot of questions. There’s coffee and breakfast eggs, but then the rest is a group of things that the English reading of the Chinese doesn’t help much. Some awkward silence ensues as we’re just staring at the menu above the owner. My friend asks what the third item on the menu is. The owner who had until then just blankly stared at us is at a loss for words. He opens his mouth to explain what it is, but then quickly closes it. As we look at him, this happens several times, until eventually, he just whips out his smartphone and shows us a picture of it. It looks like a bunch of green beans. It must have been an item that is ordered by the traditional Chinese who know what it is and don’t need to ask the owner. After a very short amount of contemplation (and wondering why anyone would ever order such a thing), we thank the owner and promise him we’ll be back.

As we wonder further down the alley and getting further away from the cafe, at a turn, we see a rather dark, filthy sign that reads, “United States Postal Service.” The building is of Streamline Moderne style – a style popular in the 1930s. Now, in the 21st century, Yelp gives it a 3 out of 5 stars for a multitude of reasons spanning from its odd location to the “chipmunk lady there.” Google reviews gives it a “Poor to Fair” rating, with one comment highlighting a tip: “The Asian lady at the next counter was much more civil – if you go there, look for the Asian lady.” But back in the 30’s, the very fact that Chinese immigrants could stay in the small enclave in New York City to send a letter or some money back to the mainland China was excellent – perhaps even without the “Asian lady.”

At the end of the day, we’re standing in front of an American ice-cream shop by the Danish name of Häagen-Dazs in the middle of Chinatown pondering whether to walk another block to a shop with I only know the location to and not the name. Upon arriving at the shop, the name is discovered to be Chinatown Ice Cream Factory. We find the menu on a whiteboard with the flavors and different items scribbled across in neon and pastel colors. After much tasting of the neon-yellow “SO EXOTIC!” flavors, we go with the pastel-pink “OUR REGULARS!” flavors, and end up sharing a pint of red-bean paste and green-tea flavored ice-cream sitting on a couple of stairs wondering whether if we’re still in Chinatown or we just constantly look for the remaining elements that make it seem like Chinatown that we all envisioned.