Home Africa The Week I Became a Celebrity in Ngaoundéré, Cameroon 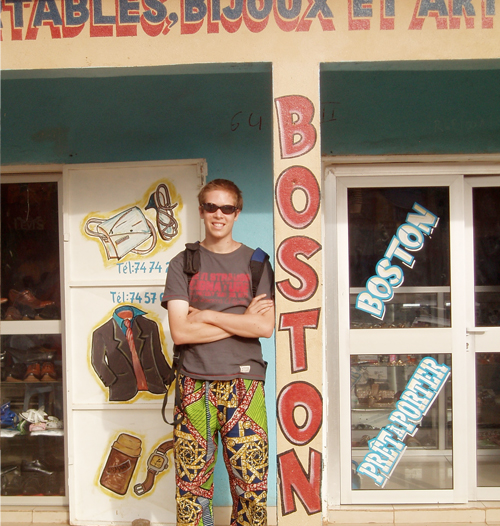 My celebrity status began when I took the overnight train from Cameroon’s capital city Yaoundé to the smaller northern city Ngaoundéré. It was the third month of my college study abroad semester, and I was thrilled to see a new region of the country. The train ride was expected to take anywhere from fourteen to twenty hours. The range in time accounted for the legendary derailment issues in the months and years prior that can prolong the journey. I didn’t care much since my friends surrounded me, I had a bed to sleep on for the night, and three egg sandwiches were tucked away in my bag.

As evening started to settle in, there was a knock on the door to our private cabin. The noise interrupted the conversation amongst us four roommates; each sprawled across our respective bunk beds. We opened up the door and two Cameroonians in their mid-twenties, one of which with a full head of well-crafted dreadlocks stood in the doorway. In between their faces rested a large video camera. They asked us if we wanted to be interviewed for a television news station. In a joking manner, I asked these men to present their identity cards, or to exhibit some verification of the news source they were representing. As I had expected they had nothing to show.

“Sure.” I agreed excitedly. The two guys entered the room and the giant camera was turned in my direction. Without any hesitation the interview began and I started with a short introduction of myself. The first question asked, “Where are you going?” In which, through my confident French I promptly answered, “We’re American!” The cameramen carried on, ignoring the fact that I had entirely misunderstood the question. Next the cameraman posed the question, “How are you finding the train?” and without delay I responded, “Oh no. We didn’t find the train, the director organized this for us.” Once again, proud of my language fluidity, it was not until later that I learned how I inaccurately answered the second question as well. The third question asked, “Do you like the train?” I raved about my positive experience, commented on the hilarity of the toilets (which were really holes that opened to the tracks right below), and expressed my comfort and enjoyment. At least I answered that one right, I thought.

Besides getting a few laughs with my friends, I didn’t think much of the interview. Over the next few days I forgot about it completely. I had bigger things to think about. I was preoccupied with adapting to my new life in culturally conservative Ngaoundéré and with my Independent Study Project (ISP), which was just around the corner. During this month-long project, for my ISP, I would need to choose a topic, conduct my own research and produce a forty-page masterpiece. Meanwhile, I was living in a house with several university students, a friendly dog by the name of Tequila, and a teeth-glaring-ferocious canine called Flu.

For my ISP, which started a week after my arrival in the north, I decided to stay in Ngaoundéré to research the cultural influences of the Arab World. Aside from talking to local professors, shop owners, and butchers, I wanted a random sample of the population. So I created a survey that asked questions ranging from consumption of coffee, inspiration of children’s names, to news and media sources. I spent two mornings (from 9am-12pm) walking in loops around the red dirt roads of the city distributing the survey to a total of one hundred and fifty people. Don’t be fooled by Ngaoundéré’s population of 100,000, because these figures include distant villages in the outskirts of the mountains. The city itself was fairly small and the downtown area could be walked from point to point in about forty-five minutes. As a result, I started to become a standard figure in the community. People who I had no recollection of would approach me on the street exclaiming they had witnessed me distributing mysterious papers the day before, or saw me scribbling away in my notebook. Strangers would spark friendly conversation with me and ask how my research was going.

As an avid runner I continued to keep up with my jogging routine during this time. Cameroonians absolutely adore running. Huge crowds of runners in all shapes, sizes, and ages can be found tromping through the streets before sunrise. By the middle of the week people started to know me not just as the White man who hands out papers, but also as the White man who jogs. Almost daily strangers would ask to be my running partner. Once I even took a guy up on his offer and ended up running with a bushmeat hunter through the surrounding stone mountains while discussing the ethics of hunting endangered species (my running partner hadn’t run in four years but said I inspired him to pick it up again). Groups of children would become accustomed to my running patterns and in large numbers would run a few paces with me in roaring giggles. Additionally, the children who lived in my neighborhood would circle me each time I came and left my home just to touch the skin of a White man.

However, it wasn’t until the end of the week that I really became a celebrity. One evening as I was going to an Internet café to check my e-mail, the man behind the counter told me he saw me on television. “On the news station!” he exclaimed. “Impossible,” I replied. He must have me confused with another White guy I thought. “No, it was definitely you. You were discussing the railway system,” he responded with a smile. It was at that point I remembered my interview from the train that took place a couple weeks prior. How could that shoddy interview have possibly made it onto television? I incorrectly answered two of the three questions! Was I a blooper being used to present a stupid American? I was worried, unsure of the context in which this interview was being displayed and who was seeing it.

Over the next three days, rounding the end of my first week of my ISP, my celebrity status skyrocketed even more. Dozens of community members ranging from the guy who made my bean sandwiches, my host family, to the woman who gave me phone credit, declared viewing my appearance on television. It seemed as though my television clip was on some kind of repeat on the main news station. Despite a range of people filmed, I was the only White person. I was embarrassed by my inadequacy in French during the interview (ironically, every person told me how beautifully I spoke, which challenged the notion that they even listened to me). But more importantly, I was worried about the social ramifications of this “White guy” on television promoting the comfort and leisure of the train. As a White man who had already become so famous, so quickly, what were the risks of me advertising a train with a history of serious derailment issues?

Although I was both flattered and honored that in one week I could go from nobody to famous, it worried me about the power I had. I was concerned about the social values I was promoting. If going for a run could bring back a past runner from a four-year hiatus, what other ways was I impacting the community? Was I dangerously encouraging citizens to take a train that I knew very little about its safety precautions? These questions, among others were never fully answered. As I left Ngaoundéré three weeks later, I was ecstatic to be removed from the spotlight. I wanted more than anything just to blend into the crowd. One of the things I learned about myself during my ISP is that being a celebrity is not for me. Pushing away phone numbers, rejecting dinner invitations and being regularly identified, was both overwhelming and draining. Now, as I sit over five thousand miles away from Ngaoundéré in the comfort of my own home in Boston, I seek pleasure in just being any ordinary guy.

______________________________
About the Author: Eli Terris is a graduating senior at Brandeis University just outside of Boston with a BA in anthropology. Eli has always loved traveling and writing to relive his experiences abroad. In the spring of 2010 Eli spent his junior year semester abroad in Cameroon to learn about development and social pluralism.