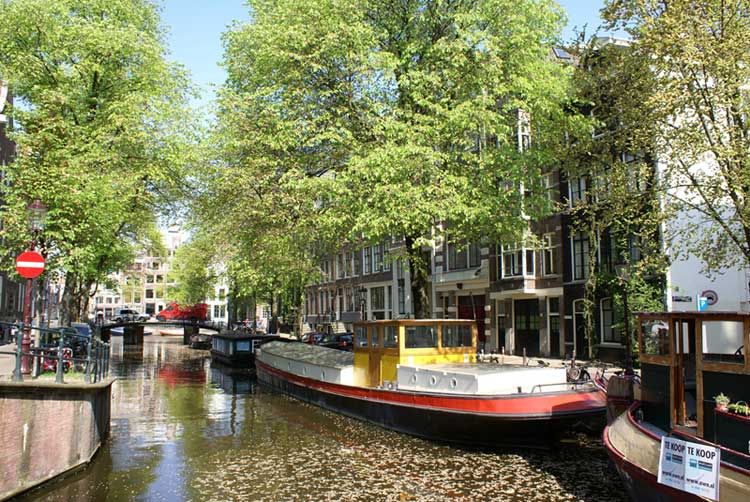 It’s hard for a travel writer to feel particularly excited about coaxing others to visit a place like Amsterdam. It’s not that it’s hard to do. It’s merely that Amsterdam is such a popular item on travel bucket lists that the task seems almost unnecessary. Everybody already wants to go to Amsterdam; everybody wants to see the canals, tour the Red Light District, smoke some super-legal weed, etc. Hell, those are the reasons I went. But now having been, I can’t help but feel that Amsterdam is somewhat misrepresented as a travel destination. There’s so much more to this wonderful city than its commonly discussed highlights. So for anybody who might be curious about the city beyond the sex and weed, here are my five things no one tells you about vacationing in Amsterdam….

Yes, you can find legal marijuana in Amsterdam’s famous coffee shops, and to be honest I’d recommend stopping by. I’m not condoning drugs for anyone who isn’t interested or inclined, but if it doesn’t bother you, go ahead and do the tourist thing and stop in. But keep in mind that Amsterdam’s best café treats are of the variety that you can eat and drink. The city is known for its coffee and beer alike, and its endless array of decadent pastries (many of which seem to be variations on the same general idea) is ridiculously great. Awesome Amsterdam saved me the trouble of going through the best of the best treats, but for my own recommendation I’d direct any Amsterdam-bound traveler to Pannenkoekenhuis Upstairs—a pancake house (literally, a small house built in the 1500s) that will make you feel like you discovered the secret to the city.

“Go ahead and rent a bicycle to get around the streets and traverse the sides of the canals!” This is the sort of language one sometimes sees in tips or guides to Amsterdam travel. I’d wager a guess that the people writing these quotes are either dangerously reckless or didn’t actually try cycling the streets of Amsterdam. That’s not to say it can’t be done, because, to be frank, I pulled it off. But it’s not exactly the best mode of transportation for a tourist. Telling someone to cycle through Amsterdam isn’t exactly akin to saying, “go rent a car and explore Jakarta”—that’s a death wish—but you get the idea. Things move quickly, pedestrian and cyclist traffic can be dense, and if you manage to stay on your wheels you may get lost in the process. If you must bike, I recommend doing it in the Vondelpark, Amsterdam’s gorgeous, sprawling city park.

3. There Are More Than Two Major Museums

Beyond the cannabis coffee shops and canals, Amsterdam’s museums are among its main attractions. In fact, a page advising travelers to Amsterdam at British Airways even mentions them before any others, inviting those interested to “take your pick of world class exhibitions” in the famed Museum Quarter. The page highlights the Rijksmuseum and the Van Gogh Museum in particular, and frankly I can’t argue with either recommendation. The Rijksmuseum is particularly astonishing inside and out. But the problem is this is too typical of Amsterdam travel posts. People only ever mention these two (and the Anne Frank House, which is more of a standalone attraction than a museum). If you’re into art and history, there’s just a lot more to see. I like to point people to the Maritime Museum, a fascinating structure built on the harbor and consisting of various artifacts and pieces of art showcasing Dutch history at sea.

This is more of a general observation than a travel tip, but it’s still something to keep in mind when you’re planning a trip. Because the main talking points surrounding tourism in Amsterdam are about vices, in coffee shops and in the Red Light District, it can seem as if the city is more of a modern playground than an historic gem. The truth is, this is a pretty old city rich with history, and you can feel it as you walk around and explore. The canals themselves are quite old, as are many of the local artifacts and works of art you’ll see in the museums. But a lot of the basic architecture and structure of the city is still standing centuries after construction. One of Amsterdam’s main attractions, the Begijnhof courtyard, is basically an attraction because it’s so old, set aside as a sort of semi-sacred neighborhood since the 14th-century.

5. The People Are Main Attractions

Finally, yeah, I’m going to gush about the local population the way most travel writers are tempted to do in so many destinations. My belief is that there are wonderful, hospitable, friendly people all over the world, and in a lot of places it’s simply part of the culture to be good to your guests. But in Amsterdam, the brand of friendliness is almost more natural and less imposing. Sure, they’re good to tourists, but as a visitor you don’t feel pandered to the way you do in some destinations famous for hospitality. This might be why Amsterdam didn’t make Condé Nast Traveler’s 2014 list of the friendliest cities, but in my book it’s a positive. The people of Amsterdam are friendly and pleasant in a very natural, refreshing way.