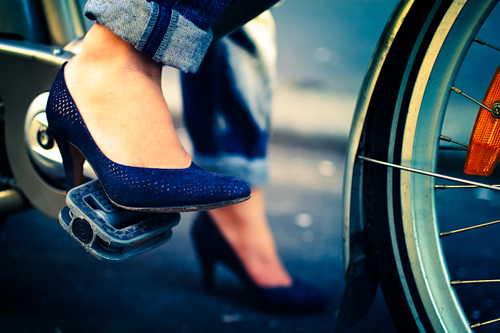 The sun is setting behind the Tour Montparnasse as I enter the digicode and lift my suitcases up the linoleum steps to my new Paris apartment. Passing a neighbor in the hallway, I grin with pride and greet him, “Bonjour!” He pauses, glances disapprovingly, and corrects me with a quick “Bonsoir,” as I enter the flat.

What time is it? I look at my watch: 7:45. Right. It’s already evening, and I still have to pick out an outfit for my first day at Sciences Po. When my brother lived in France, he started wearing suits to school. I remember laughing, wondering what had happened to the surfer I once knew from back home. The Southern Californian in me hesitates at the thought of abandoning my flip-flops, but I give in and pick out a pair of flats to wear tomorrow.

The next morning, I push through the iconic doors of the school. If you haven’t heard, Sciences Po is the foremost political science school in France, and anybody who’s anybody in la République has a diploma from there. Traditionally, it’s full of aristocrats, spoiled young Parisians and the occasional hard-working southerner. Students tell me that the hardest part of getting in is prying open the massive iron gates of 27 Rue St. Guillaume, but I have discovered that the hardest part of getting truly “in” is learning how to dress. Within five minutes of entering, it’s clear: I have to change my look. In the face of Left Bank fashionistas, the international students are dumbfounded, and in our orientation methodology class, our topic of conversation invariably turns to dress.

“I felt like a homeless person walking out of my apartment this morning,” admits my Canadian friend Richard, who’s wearing an in-any-other-city-this-would-be-respectable jeans-and-hoodie ensemble. Even Anna, the stylish sorority girl from UCLA, confirms that she has nothing to wear. We come to the consensus that it may be necessary to burn everything that we own quite simply because none of it was purchased in France.

Accepting the reality of my empty bank account, I begin to cut back on my food budget. I can eat cereal for dinner, but style in the 6th arrondissement is non-negotiable. They judge you here. So I begin the slow but necessary overhaul of my wardrobe.

The first semester grinds on, and in November, I’m introduced to the strikes à la francaise. In an attempt to save their unnecessary and outdated special regimes, which include a retirement at age 55, the transit workers take a two-week break. President Sarkozy’s promise of reform has met its match. And the students, in their fantastic and perpetual replay of the révolution of May 1968, have blocked the train stations in all major cities. The mechanisms of Paris (and of France itself) seem to function within the paradox that “La Revolution Permanente” coexists with a resolute stubbornness against any threat to tradition, change or comfort – an obsession with history so profound it’s nearly absurd. But how can I fault the Parisians for their contradictions, when they just look so damn good? How do they look so damn good?

On any given Monday morning, the bell rings in the Sciences Po entrance hallway – am I in high school? – and the glamorous young Parisiennes file down to the cafeteria to fill up on espresso and state-subsidized sandwiches. In the student lounge, the popular kids and their hipster groupies laugh over pictures of the last week’s club night. They don’t seem to take their university life seriously, but god do they pull off those jeans well.

I grab a sandwich and head up to Histoire et droit des Etats, where a classmate of mine is presenting her exposé on International Law. She elucidates her problématique, and her analysis is sound. I should be taking notes, but all I can think is, Where did she get those shoes? Before I know it, class is over, and I exit the building onto Rue des Saint-Péres, hoping to waste a few minutes gazing into the designer boutiques on my way to the metro.

A young high school girl whizzes by on a bicycle, her patent leather heels gleam in contrast with the muted gray of the layered sweaters wrapped around her tiny body. If only I could pull that off… She doesn’t even seem to be pedaling – the bike just glides from the force of her grace.

I make my way across the Seine to pick up the two children I babysit. I’m five minutes early, and I use my time waiting outside to observe the Parisian mothers’ outfits. You’d never see soccer moms like this in San Diego. With them, the older children: well dressed toddlers and pre-teens in skinny jeans, Converse, and babyDior. They look so much better than me. It’s ok, I think, they’ve all had a head start. I’ll just have to raise my children here to provide them with the opportunities I never had.

In late January, I notice that, since coming to Paris, I haven’t bought anything outside of the gray-scale. I admit that my attempt to blend in has become somewhat exaggerated, if not an obsession, but I let it go because it’s winter. I’m not the only one wearing black. Yet in the soft winter light, the rainbow-gray rooftops of the city shine vibrantly. I realize that the city, like its residents, lacks color; its buildings blend together to form a beautifully simple whole, creating a template on which form and light show most clearly.
And it’s not just the Parisians themselves who have it figured out – if you walk into any clothing store, I can almost guarantee that 90% of the clothes will be black, navy blue, or grey. In the spring? White, tan, and beige. Move to Paris, and you’ll start to call these colors.

By the second semester, my confidence is peaking: my friends in New York even think I’ve become Parisian. But I know that it’s far from the truth. I’ll never even come close without a key to Parisian chic: the leather jacket. It’s springtime, and I’ve all but given up on my search in the face of the light and airy “Spring/Summer ’08” collections that dominate the storefront windows.

Then, out of nowhere, I find it. My Holy Grail. On a Thursday morning in late April, while walking to the bus after a few hours of shopping (my class is cancelled, and I can think of no better use of my time), I stop one last time in the local branch of Mango. Ok, if it’s not here, it’s not anywhere. Heading straight to the jackets, I try on the first one I see. I look in the mirror, disappointed. Like the hundred or so before it, it’s just not right. Well, at least I’m saving money. I pick up my other bags and head for the door.

“Mademoiselle? We do have this other color that you haven’t tried yet,” the saleswoman holds up a soft, structured leather jacket in a deep eggplant color. You mean it’s not black!? This is a big step for me… Nervous though I am, I try it on. To humor her, of course.

I don’t even need to look in the mirror. It’s perfect. And she agrees. Four hours later, I’m on my way to dinner, wearing the jacket. As I glide my bike past the Tour Montparnasse, my ipod blasts a Daft Punk beat, and the grin on my face is wider than ever.

On the first day of the summer sales, aristocratic women of the Left Bank pour out in droves to buy the same black jackets they already have, along with more gray sweaters and ballet flats. They know what works, and they don’t hesitate to buy it. The Parisians live in a city so aware of itself that its confidence is often misinterpreted as pretension.

Yet I don’t think I fully understand this city, or its beauty, until my last day. Riding my bike across the Pont Neuf this brisk, serene July morning, I see for the first time a city in routine motion, a city worrying about more than its look. Before its residents wake up to their espresso and morning cigarettes, street-sweepers are preparing the city for another day on display. Trash is being picked up. But they let their dogs shit in the streets! – I had thought that past September – How do these people live with themselves?

I grab my bags, call a taxi, and cross the Seine one last time – It’s my city, and I look the part. I can no longer call it a home, but I now know that Paris, in its constant state of self-absorption, could not care less. It’s true, I’ll never be a Parisienne, but at least I’ve learned how to ride a bike in heels.