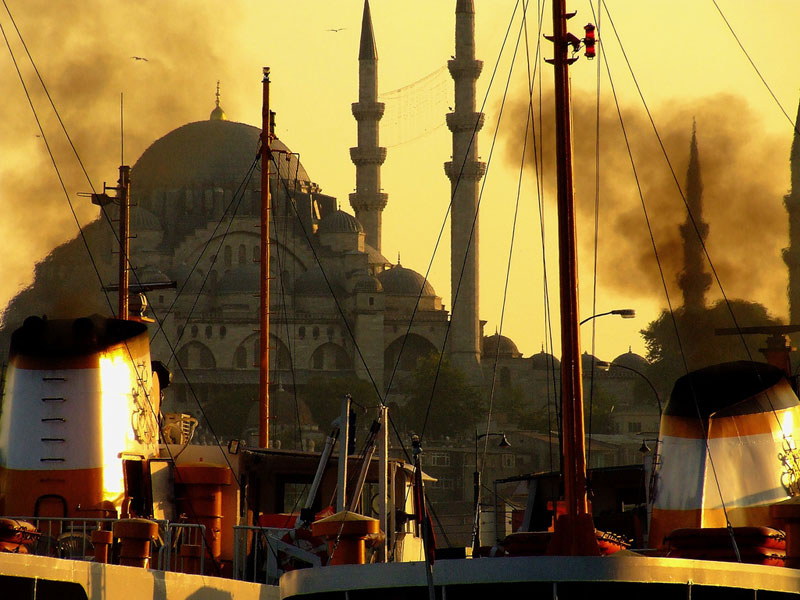 Usually, I could see it coming. The carpet salesmen, with their hard sell, were obvious. So were the guys who hawked gület cruises along the Mediterranean and the ones who wanted to guide us through the Blue Mosque.

Sometimes, though, it wasn’t so obvious. When a waiter in Konya helped us find a pharmacy, it didn’t occur to me he’d steer us afterwards to his friend’s souvenir shop around the corner.

The trouble was, Turks were so genuinely friendly that it was hard to tell when they were just being helpful and when they expected remuneration.

Take the day we visited the Isa Bey Mosque.

My wife and I decided to visit the mosque in Selҫuk because we’d heard it was a prime example of pre-Ottoman Islamic architecture. We got there late one afternoon after most of the tourists had gone. As we approached the entrance, an Asian couple just ahead of us were taking off their sandals. Two pairs of sneakers sat on the ground outside the entry doors. We started to slip off our sandals, too.

Suddenly, a short, round man in dark slacks, white short-sleeved shirt, and sandals hurried out waving his arms. “You don’t need to take off your shoes,” he said. “Leave them on.”

The couple put their sandals back on and went inside. The man came over to us. “The French people took off their shoes,” he said, nodding toward the sneakers on the ground, “so everyone thinks they have to take them off.” He seemed amused.

We slipped our sandals back on and followed him inside. The interior looked like other mosques we’d seen, except for its broad marble entryway. “I put the marble in years ago so people wouldn’t have to take off their shoes,” he said, chuckling. I thought it was pretty funny, too: I was almost sure our guidebook had said to remove our shoes before entering this mosque. I began to rummage for the book in my backpack.

“I’ve been the imam here for twenty years,” the man said, a tremor of excitement in his voice. “I had my picture in Condé Nast.” He showed us a laminated page from the magazine with a picture of himself sitting cross-legged on the floor, robed in white, facing the camera with an open, almost innocent expression. He was younger and slimmer then, with more hair. “That was twenty years ago,” he said, stifling a giggle, “in New York.”

He didn’t seem like any imam I’d run across. The ones we’d seen elsewhere in Turkey had been dignified, bearded, older men in white robes strolling through museums with retinues of followers. This one was round, clean shaven, and almost jolly.

I found what I was looking for in my guidebook and tapped him on the shoulder: “Isa Bey Camii,” I read aloud, “Leave your shoes at the door and remember to cover up properly.” We both laughed; it’s not often you catch an authority getting it exactly backwards.

It was a touching moment of camaraderie. I felt a growing rapport with the guy.

“I studied Arabic calligraphy for eleven years,” he said. If we wanted to come around to the side of the camii he’d write our names for us in Arabic script. What a nice gesture, I thought. I was delighted.

We followed him around and into an alcove with a colorful display of tiles, fabrics, and Turkish coffee cups. He took a laminated card down from a shelf and asked our names. “Mardena and Paul,” I said. I started to spell my wife’s name. “You don’t need to spell it—Mar-dee-nah.” He pronounced the name slowly, writing with a felt pen. “Paul,” he said, and wrote again. The script was beautiful, graceful and flowing. I felt honored, even a little humbled. He handed me the card. “Teșekkür, teșekkür,” I said appreciatively.

Then, gesturing toward the display, he said, “Would you like to buy something to help support the mosque?”. . . Jeez, I thought. Even the imam? He took a small tile down from the display shelf and proudly showed me the inscription: Iznik. I’d read about Iznik tiles. To say they weren’t cheap would be an understatement.

We paid him. He wrapped the tile in tissue, dropped it in a plastic bag, and handed it to me with a grin. “Teșekkür,” I said. We shook hands, and my wife and I headed down the cobblestone street. I felt a little shell shocked. “Did you think . . . Could you tell . . .?” I asked my wife as we walked. “I sort of had an idea when he invited us to the alcove,” she said.

Myself, I hadn’t had a clue. An entrepreneurial imam?

As we walked along, something our hotel manager had said earlier that day came to mind. After checking us in, he’d brought us tea and pastries, then sat down and told us about himself, the hotel, and the city. Then he asked if we’d like to buy a Turkish carpet.

My wife and I had glanced at each other uneasily. Umm . . . we didn’t think so, we said, both shifting a little on the divan.