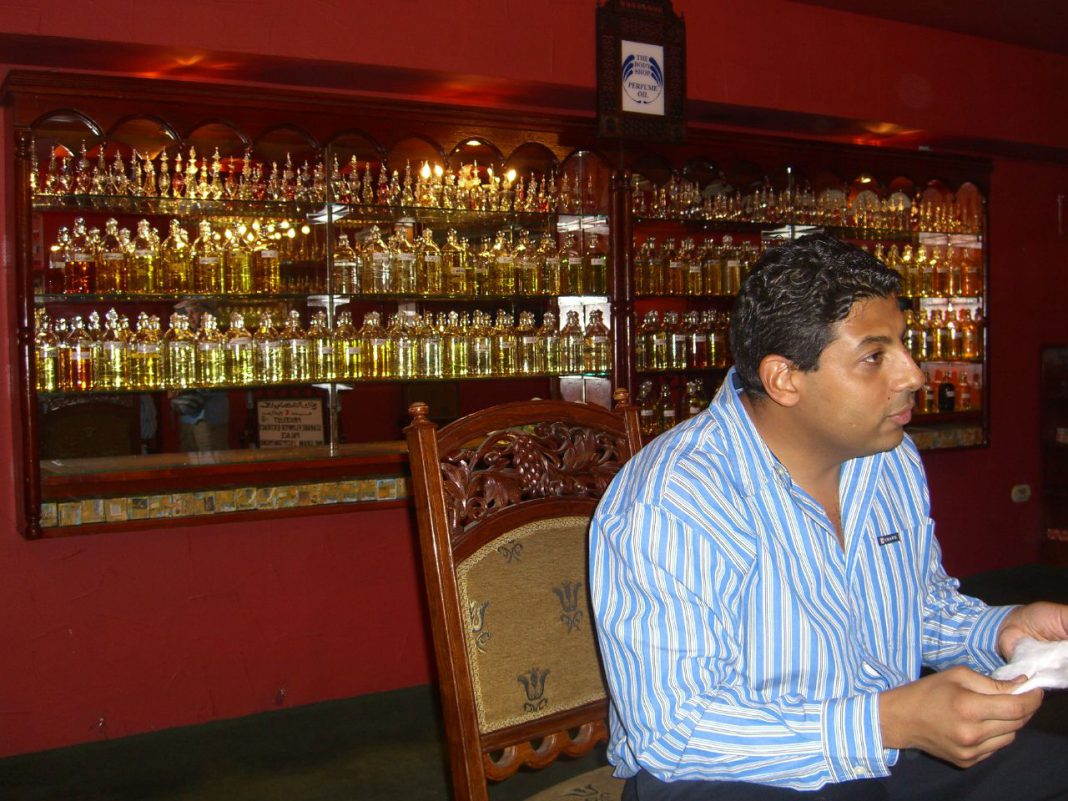 When the taxi cab driver I hired to take me to the Pyramids for the evening Sound and Light Show suddenly veered off into a dark alley and stopped in front of a ramshackle building with a tired one-bulb sign, I wasn’t sure what to do.

It didn’t take long to realize there wasn’t much I could do.

At one end of the alley were the lights and friendly people of the bazaar while ahead the unpaved road wound through rubble and dark buildings with even darker shadows. Already, I thought, this tour, purchased at the airport, had cost more than it should have and now maybe I was about to pay that last full measure.

Allah wills it. The phrase, previously relegated to guidebooks, quickly came alive. It had helped many Egyptians in a bad spot. It did me no good whatsoever.

The taxi cab driver flung a thick arm over the seat back and smiled. “Follow me,” he said, and since it was my first day in Cairo, Egypt, I had no cute reply to get him back on any well lit road.

I also smiled that stupid smile of the traveler who deep down hopes his idiotic expression or effervescent friendliness will stop others from robbing or destroying him.

Outside the taxi, voices from far away could be heard and an Egyptian or two strolled past hardly taking notice of me. I found that encouraging. It didn’t appear they were thinking about being onlookers to some tragedy.

The sign above a doorway casting its dim light was covered with the squiggles of a language I had little hope of deciphering. One English word sat at the bottom – essence – perfume…great, I thought.

The taxi driver beckoned and I walked inside with him. Immediately upon entering the air became thick with a jumble of perfume. Everywhere, as in an old apothecary shop, large stoppered perfume bottles sat on shelves that reached floor to ceiling. A smiling Egyptian, somewhat on the thin side, pumped my hand and led me to a couch that might have adorned a train station somewhere.

My taxi driver disappeared into the night after indicating he’d return in time for me to make the Sound and Light Show. The fears evaporated.

The perfume proprietor motioned to a young fellow standing obediently to one side. The boy stood before me. The shop owner spread his arms slightly. “Refreshments?” he asked.

Oddly, my first thought was of diarrhea. What could I drink that wouldn’t be teeming with wildlife.

He noticed my hesitation and repeated a little saying to the effect that I could refuse to buy but had to accept his hospitality. Visions of Saladin and centuries-old pashas rose.

“Pepsi,” I answered, and the boy slipped away.

The proprietor pulled up a stool. “Do you know what essence is?” he asked.

“Perfume?” I replied, assailed by the heavy fragrances of the room.

“The base of perfume,” he said. It’s the purest form of the perfume. We take anything and extract its essence. We crush flowers to give us essence. From there we add as much oil as we wish to make all perfume of all prices. But the essence, that is the purest. One drop is all that’s needed. One very small drop.”

He reached behind and lifted a bottle of light-colored liquid. Taking out the stopper, he handed the bottle to me and asked that I smell the contents. I didn’t recognize the fragrance, although it was very pleasant. I shook my head.

“Sandalwood,” the owner said, his eyes widening trying to anticipate my enthusiasm.

He pulled out another bottle. Lotus. And another. Jasmine. I had the idea.

The boy returned with the Pepsi. The little pit of obligation grew wider. The Pepsi was warm and each swallow left only a sticky residue in my throat.

[quote]The game had been played, and this time he had lost. He had invested a Pepsi[/quote]

The sales pitch droned on, but I found myself being drawn not by the pitch itself but by the store with its dusty bottles and wooden walls a few years away from returning to the earth. The smells and the city outside were different from what I’d ever known yet thought I knew through books. The young man selling his wares was thousands of years old. Tents may once have covered this spot ages ago when perhaps another man haggled over bowls and silks.

I knew the driver outside sat in anticipation hoping I’d buy something so he could get his cut. I suddenly knew this, and it didn’t matter. I was in the system and it was working me over. This was the place to be. I had no desire to be unsafe or foolish, and I wouldn’t have cared to be diverted too many times, but now I could pluck the past as well as the present from the cloying atmosphere.

“It is beautiful. Sir?” The man’s voice came back, along with another bottle. I took it. The scent, as usual, was very pleasant.

He rattled off a price. I shook my head. Actually, it was probably a very good price but my refusal was more a sign of determination, a small exercise of the mind to strengthen my resolve for any future encounters.

The man lifted a finger hardly to be deterred by a feeble negative reply. “Perhaps a smaller bottle,” he said, and lowered the price.

“No,” I repeated, and wondered why I shouldn’t buy it at that price. If he had gone lower I might have succumbed. I didn’t waver, however, and neither did he. For me, the thought of the driver sitting smugly in the taxi planning on my timidity hardened my determination.

I shook my head with great finality. The proprietor’s smile became a bit strained. His hands went up in slight despair. I saw no anger. True to his word, my not buying was accepted graciously. The game had been played, and this time he had lost. He had invested a Pepsi. Later, others would arrive and, assuredly, some of his wares would end up in their luggage.

The driver reappeared and he and the owner exchanged glances. The drive to the Pyramids was quiet. Driving me had been less profitable. The wait for me to return from the show had probably seemed longer than usual, although I’m sure he used his time wisely. Empty cabs gather no money.