Home North America Navigating the twists and turns of the c: Girl’s on adventure to... 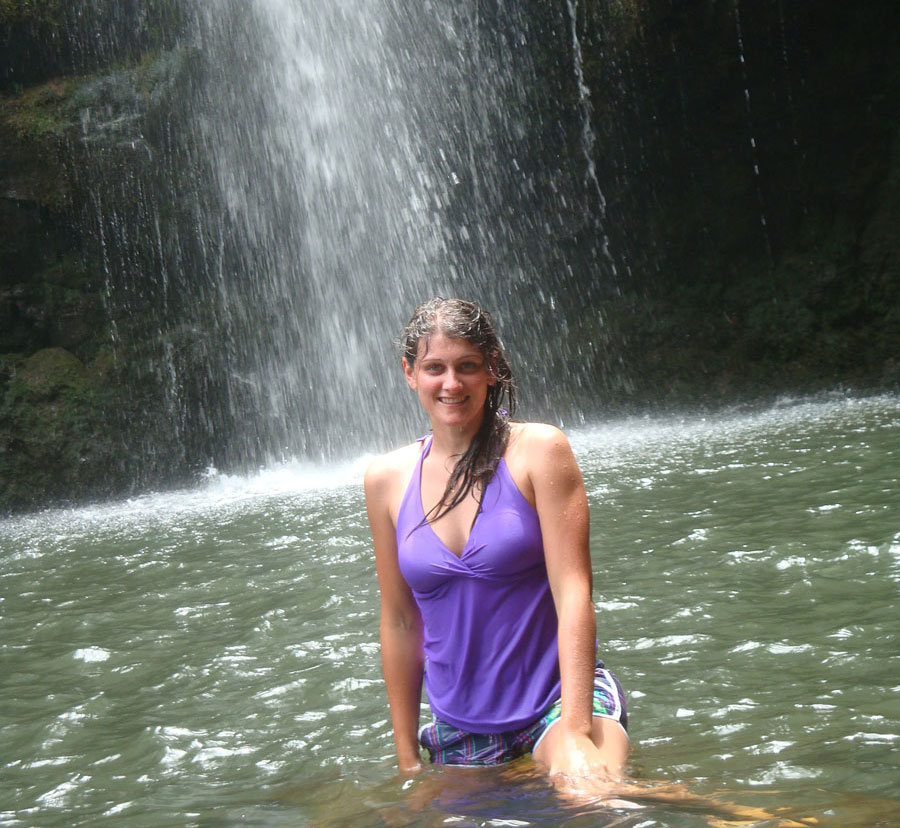 “Try this, it’s amazing. And so good for you.” I eyed the bran-like cereal mush being offered to me in a bowl, an all-natural sunflower seed concoction mixed with soy milk. It was clear Cat was a hippie, the natural material of her earthy-coloured clothes, bare-feet and free-flowing hair was a visual give away. I accepted mostly because of a why not attitude? That was my first introduction to Cat, another solo female traveller staying the night at the Rainbow Surf hostel in Paia, Maui.

Nine hours later Cat and I were driving the “Road-to-Hana” together.

A sense of adventure I already owned, but after a day with Cat I would learn to let go even more, to really observe, feel, touch, taste and smell nature. 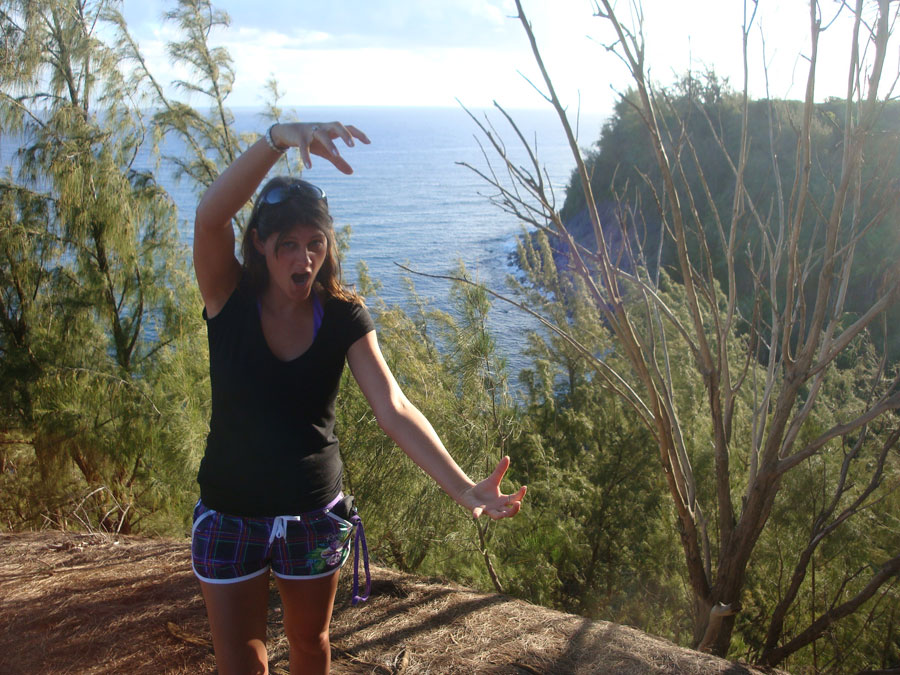 It’s 6:30am when we set off from our hostel in Paia, wearing our tourist uniforms of singlet, sarong and sunglasses with an ever-ready swim suit underneath. The first stop was “Jaws”, a hard to get to surfing spot where the waves come in at 100ft during the winter months. It was August so I wasn’t expecting any big waves. The bumpy, sandy dirt road resulted in an unfamiliar “Low tyre pressure” warning light just as the air from all four tyres simultaneously escaped, a girly squeal didn’t change the fact that it was too late to turn back now.

Two girls in a rental car with no mechanical experience or phones on a deserted back road wasn’t an ideal situation. However, I’d come to see Jaws and so we pressed on.

My pilgrimage felt duly rewarded when I looked down at the infamous water below, imagining the surfer’s being towed out by jet-ski’s and riding back in on the gigantic waves funneling into the inlet. We sang Beach Boys songs as we rumbled back over the potholes and along the main highway to find a gas station to pump up the car tyres.

The Hana Highway narrows to a two lane winding road, about an hour past Paia town, stretching forty miles to, unsurprisingly – a town called Hana. “I survived the Road-to-Hana” giftware is everywhere, t-shirts, mugs and towels emblazoned with a yellow hazard road sign with a black arrow snaking upwards were not the kind of souvenirs I was looking for.

Rainforest sprouts one side, ocean views extend on the other. It’s known for its tight corners and edge-of-the-road cliffs into the Pacific.

It’s one road there and the same returning, unless you plan to drive around the back of the Haleakala Volcano, where the road is just as winding but even more narrow and less maintained. It’s advised not to drive at night on either of these roads, and make sure you fill up with gas as there aren’t any refuelling stops between Paia and Hana.

Tourists are abundant here so traffic can back up due to cautious drivers, one-lane bridges and people frequently stopping at each new, but similar vista. We experienced a major hold-up due to a forest fire ahead and waited two hours whilst emergency services doused the blackened and now vegetation-less cliffs.

We wandered along the road eating ripe guavas and cherry apples from roadside trees whilst honeymooners in their convertibles and jeeps baked in the sun and tour buses idled to keep the air-conditioning running as they waited for the road to clear.

I chose Maui to “experience” the nature of an island as it would have existed before white man’s discovery. Cat and I didn’t plan to just tick off guidebook recommended stops with a camera click and move on.

At Twin Waterfalls we wandered down a banana leaf strewn path sipping sugarcane juices, our sarongs cradling bulges of likiokai, the Hawaiian name for their sweet, yellow passionfruit. Cat had declared she didn’t need to wear shoes, I decided to follow suit, but seconds later my sandals were back on, my desire to be free was strong, but the soles of my city-feet weren’t yet up to the task.

Further down the highway at Waikani falls, a cliff face with three separate waterfalls splashed into a pool below. The occupants of a generous number of cars had stopped for their routine camera clicking, but we climbed down rocks and fallen branches at the side of the bridge to the level below, hopping from boulder to boulder until we stood before the falls. The water was freezing, but invigorating. Why not swim under a triple waterfall in Maui if it’s there to be done? I looked back up at the bridge to see those same tourists now taking photos of we brave adventurers.

Exploring the Keanae Peninsula Bay road off the main highway we found an arm of land reaching into the sea, the water looked inviting as it does everywhere, but this is not a place for swimming. The sharp, volcanic rocks and the crashing waves aren’t exactly people friendly. We saw quite a few tan-skinned fishermen though, I wondered if it was even possible to ever get used to the mesmerizing views.

I was lucky, I had my own nature guru companion to identify wild-growing mango and guava trees, but even on my own it would’ve been hard to starve along the road to Hana. The highway is ripe with fruit stands and banana bread stalls every few kilometres. “It was my Great Aunty who had the original recipe for banana bread on the island, it all started here, then everyone wanted to make their own too,” promised one islander as we sampled, “The best banana bread on Maui.”

At another vendor’s house we left our payment in a tin box on the table before pulling apart a fresh loaf of mango bread. The fruity, cinnamon smell and taste lasted much longer than the actual loaf of bread. 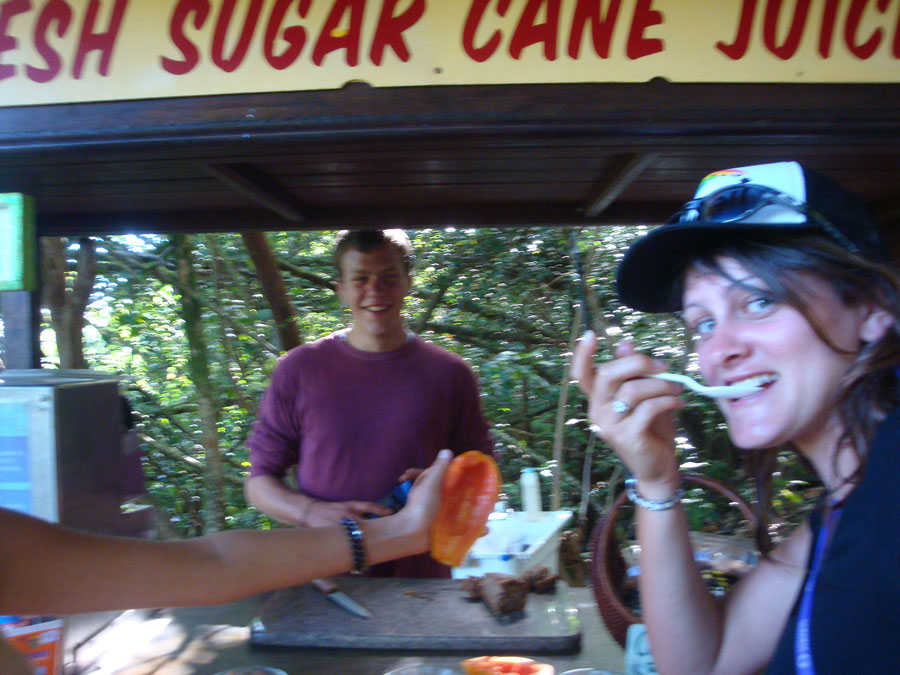 Following a stepped path from a timber shack displaying koa wood wind chimes, grass mats and mountains of green coconuts and papaya we found a lower level, where ferns created a natural fence allowing a glimpse of hidden ocean views beyond.

From his fruit cutting table Kevin offered us some juicy pineapple and sweet papaya. That Maui pineapple was pure golden sunshine drizzling down into my stomach, filling my mouth with a sweetness and warmth I’d not known fruit could be responsible for. We ate the entire pineapple and papaya. My lips smacked for more.

The natural high in my belly continued until we reached Coconut Glen’s ice-cream stand. Cat tried the spicy Chipotle chocolate, I had liliokai. A hollowed out, half coconut shell with a strip of coconut husk served as our bowl and spoon. I could see a light twinkling in both Cat and Glen’s eyes as they bonded over his dream of changing the world through his home-made, non-dairy, all-organic coconut milk ice-cream. It was a kind of hippie oasis and Glen’s passion was so catching that I was soon repeating his spiel to the next customers about how this was the greatest ice-cream experience you would ever have and if after tasting it you so agreed, to signal a gong on Glen’s big brass plate. I rang it three times. 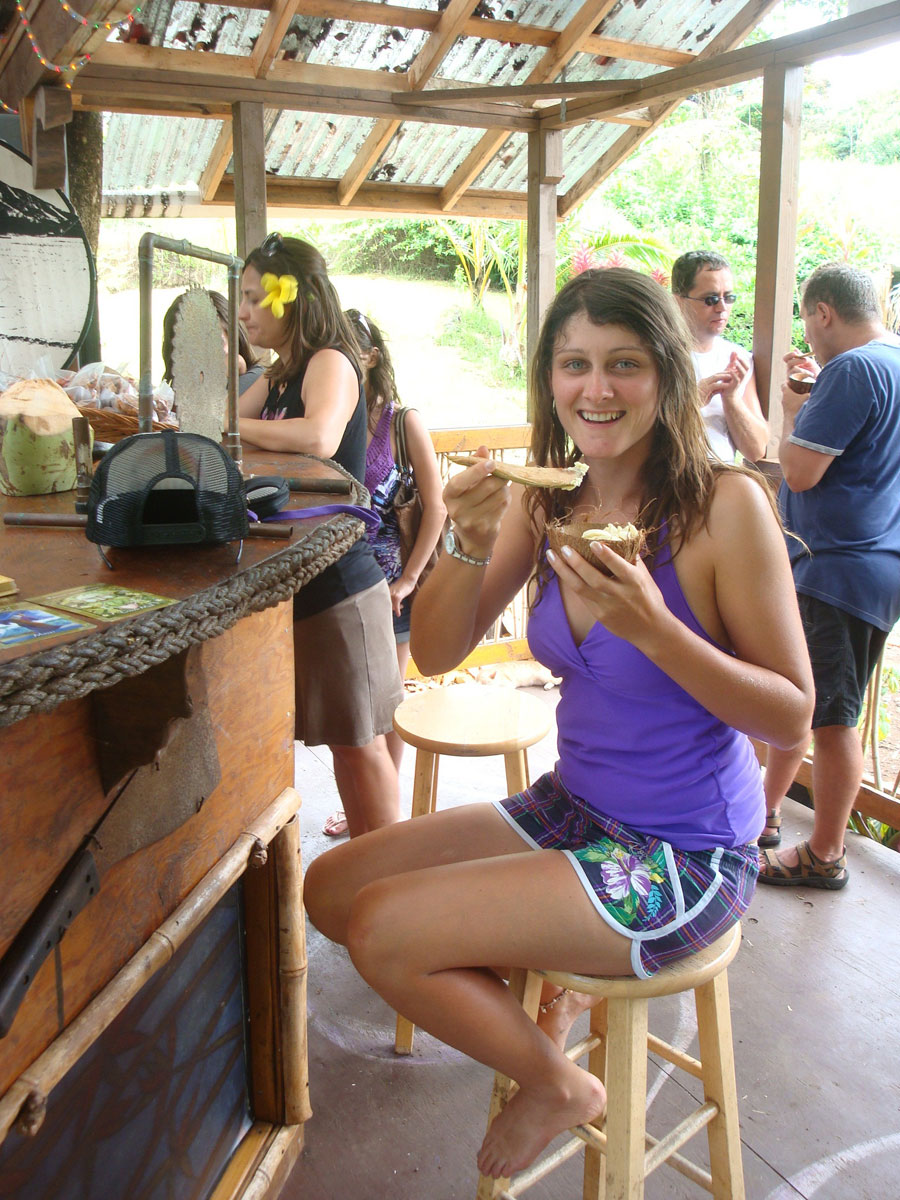 Hana is all about the drive, so after our eight hour jungle exploring, lazy eating, waterfall wading and people meeting journey, we were tired!

Relax time called for some sun and sand. By now I was wearing bare-feet full-time and eager to trek to the red sand beach. It’s accessed via a sandy, somewhat rocky cliffside route. Rounding the corner to the cove where the rocky sand really is a rusty red was amazing! We clambered down to the beach. Cat posed cross-legged in the sand, meditative in the serene setting, rich red 30 metre high cliffs walled us in on three sides, some vegetation grew at its base. The swelling ocean was tamed by a giant wall of rock, creating a calm lagoon for swimming. I watched a man and his son jump from the rocks while I hot-footed it straight into the consoling water, happy to have achieved my own claim of surviving the road-to-Hana. Now all I need is one of those mugs with the road sign symbol on it.

Fear and Loathing in Paris