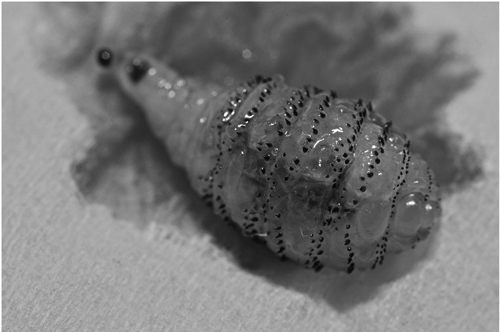 “It’s a cyst,” my dermatologist said as she stuck the steroid filled syringe into the lump on my bottom.

“A cyst?” I replied with disbelief. “I’ve never had a cyst before and like I said, it stings sometimes, like it’s moving and I’ve just returned from Belize….”
My doctor looked at me with disdain, bringing her face in close to mine.

“I see no animal parts sticking out,” she said.

My husband was grateful for the cyst theory. He had a similar lump on his calf. My beliefs on the origin of our matching lumps were too horrific for him to even consider. So, I found myself isolated in my growing apprehension.

Three weeks earlier we had returned from a week long family vacation in Belize. The term ‘family vacation’ invariably elicits underhanded laughter. The term is often delivered with derision and accepted with condolences and empathy. Yet trying to have fun as a family was what we were doing when our nine-year-old boy lifted his leg from a river deep in the Belizean jungle. Blood trickled down his shin. He insisted the fish were biting him. We laughed and decided he had scratched a bug bite even as he lifted his second leg and pointed to another trickle of blood. Later, Connor would have his laugh when he watched our mouths hang open in disbelief. Our Belizean guides came down to the river and the boy’s mother (I refer to myself as ‘the mother’ when I want to distance myself from my behavior) said with a derisive smile, “Connor says the fish are biting him.” In my defense, we were all four of us standing in the knee deep river watching the one inch fish swarm around our legs. We had hiked 3 miles into the jungle for an overnight camp out. We had been swimming for at least an hour in the deeper parts of the river with not one incident from the fish. Of course, I tell you all this is in order to bolster my side of the story.

“Yeah,” our guide said nodding. “These fish’ll bite. They’re cousins of the piranha.”

And then there’s Meghan, Connor’s twin sister. Meghan was 90 pounds of stretched muscle and tendons stretched to a height her body mass had not quite caught up with. This family adventure required her to carry a forty pound pack 3 miles into the jungle. An hour earlier Meghan had carefully chosen to wear a black tank with small shoulder straps because of her sun-burned shoulders. She stood quiet and still as our guide slid the nylon straps of the forty pound pack onto her thin, raw shoulders. Her message was clear as she stared at me, her blue/gray eyes wide and filling with tears as the guides adjusted the scratchy nylon straps along her tender, red shoulders. I could only shrug and look away. I had my own, I want to think, heavier, pack coming my way. In our defense, my husband and I had planned on carrying most of the gear in our own packs, leaving our 9 year olds with the less cumbersome day packs. It seems ignorant now, but we hadn’t considered the amount of gear we would need to pack for a jungle camp out. We also had not properly thought out the extra rock climbing equipment we needed, helmets, ropes and harnesses, because we wanted to climb rock walls deep in the jungle. Stupidity doesn’t discount our intent. Which reminds me of Connor’s first rock ascent where he put his hand in a crack and was bitten by a creature living in the dark crevice. Connor screamed as he let go of the rock wall and dropped five feet, hanging by the rope attached to his harness and banging his legs and arms against the knife like, volcanic rocks. A climbing harness consists of nylon straps snugly wrapped around the waist and groin area. It’s comfortable enough unless you fall, at which point your body weight turns the straps into a tourniquet in the area where it would be very uncomfortable, especially for a boy.

But back to Meghan, who was too quiet to complain to our guides about the weight of her pack and the 110 degree heat- our guides whose packs must have been close to 80 pounds each. With certainty, I can say Meghan wasn’t amused.

We learned how to make tea vine from roots, cook plants from the jungle floor, and build a shelter and a bathroom with a machete. Pat and Connor experienced the spiky trees lining the trail within easy reach if you stumbled on the path. The spikes were barely visible until you grabbed the trunk for support. The black thorns were then easily seen sticking out of your skin and certainly easily detected by the sharp pain. Pat had a tick who bit, unlatched and bit him for hours until he asked us if there was anything on his back. There was. There were the searches for the scorpions that climb in shoes and packs, the bats who flew into our sleeping hammocks and the howling monkeys in the trees. It was an exciting experience although sometime during the event I have a vague memory of saying that once in a lifetime was enough.

My trauma began back home. I was at a soccer game when a bee, or so I believed, flew up my skirt and bit me on the uppermost part of the back of my thigh, an area that could also be described as the southern end of my buttocks. The pain disappeared after a day but the bite grew and hardened into a lump. A few weeks passed with occasional pin-like feelings from the lump and an escalating gnawing feeling that something wasn’t right. Pat had a similar lump on the back of his calf. I watched as his lump grew, oozing pus and blood daily. My suspicions grew.

Prior to our vacations I spend months absorbing guidebooks and history books and watching movies about our destination. For Belize this included Mayan history and British colonialism along with the traveler warnings; petty theft, Malaria, Dengue Fever, contaminated water, snakes, rabies, cuts, bites, and stings, including the botfly labeled as mostly myth by one guidebook. All of these dangers were determined to be uncommon and mostly preventable. We all endured the suggested immunizations. Long pants, long sleeves, boots and good insect repellant were suggested for the bites and stings. One book also suggested not to stick your hands in holes and crevices when collecting firewood. It didn’t say anything about crevices when rock climbing.

During the vacation, most of my research remained vague memories. I wasn’t overly concerned that anything dangerous or substantial might happen during our trip. It wasn’t until I was home and the bite lingered that I realized I knew the answer to the growth.

Weeks of denial passed slowly. I endured a second round of syringes gingerly inserted into my cyst, which, to my dermatologist’s surprise, had not shrunk. My ability to deny the truth, even in the face of credible opposition, grew more and more unachievable. Five weeks after our return, I decided to use an extraction technique I had discovered on the web. This was no easy task because of the bump’s location. The process consisted of me standing on my bathroom sink, in front of the mirror, bent over to view the lump and smoking cigarette after cigarette. I blew the smoke into a glass and placed the rim of the glass over the steroid injected ‘cyst’. The smoke would disperse and I would draw on the cigarette again and again. Forty five minutes in, I saw movement from the bite. My ‘cyst’ was trying to clear its air hole, unable to breathe because of the tobacco smoke. Fifteen minutes more of hanging upside down and puffing on the Marlboro’s and I squeezed and squeezed that cyst until it finally shot out into my sink where it gently swayed back and forth. It was gray, with elephant-like skin and cone shaped, about ¾ of an inch high and ½ an inch in diameter.

I got my husband’s out that night, cutting 15 minutes off my time because of the shortened learning curve. Pat’s ‘cyst’ looked different due to the lack of steroids. In a clear sack, a fully formed, black fly could be seen, unmoving.

Both parasites were dissected by a local hospital and determined to be the ‘mythical’ botfly. Mosquitoes carry the botfly eggs on their needles. When the mosquito feeds, the eggs are deposited into the host. Eight weeks later, the botfly expulses itself.

I had a copy of the report forwarded to my dermatologist.

Belize was an adventure. I would even say it was a great family vacation.

What to wear when traveling on a long-ass bus ride.