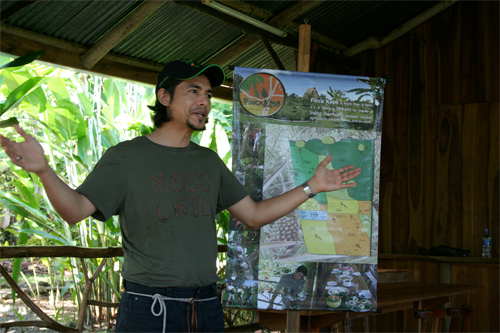 Alex Retana knows there are better ways to make a living from the land than with mono crops and over-use of chemicals. The fourth generation in his family to farm his 60-acre plot of land, Retano isn’t much different from other enlightened, earth-friendly farmers of Central Virginia—with one major exception: He’s located in a remote jungle in Costa Rica. Self-taught, the 22-year-old Retano is proof that sustainable agriculture is within reach of everyone.

[quote]When asked about the process for making white chocolate Alex laughs. White chocolate, he explains, is a misnomer–it contains no chocolate, only sugar, milk, and cocoa fat.[/quote]

Observing his father’s reliance on pesticides on their farm on the Osa Peninsula on Costa Rica’s Pacific coast led the younger Retano to the conclusion that better ways to farm must exist. With no exposure to sustainable practices of the United States, Retano could rely only on the work of his fellow farmers for insight. It wasn’t long before he concluded he could make a profitable go of it and at the same time help his community coexist more responsibly with the environment. In Costa Rica this was uncharted territory. His was a vision his father would have approved. Recognizing his son’s passion and vision, the elder Retano bequeathed him his farm. Six years ago the son set out to put his plan into action.

Retano divided his land into specific sections. The first section, which runs the entire length of the farm, has neither been cut or altered by humans in more than 200 years. This is the length of time for a jungle to reach maturity. He then set aside another section for experimentation. It’s here Retano hopes to advance sustainability farming practices in Costa Rica. Like the United States, his country is learning to deal with mono-crop farming. In the States, corn is the mono crop. In Costa Rica, the pineapple has overtaken all other crop production, making it the number-one supplier to the Dole Company.

In his experimental plot, Retano has started beds of lemongrass, mint, cilantro, paprika, ginger, and other plants. He keeps in close touch with CATIE–more formally known as Tropical Agriculture Research and Higher Education Center, an affiliate of the University of Costa Rica. With the university guidance, Retano can be sure he is not introducing harmful species to the local eco system.

Retano is always on the lookout for alternatives to the pesticides commonly used in Costa Rica. He’s learned to steep the leaves of the Pichio and Bitter Ash trees, much the way tea is made. The results are pungent and unpleasant and therefore ideal for spraying at the base of his plants to deter destructive pests. He also learned that banana plants placed in other areas divert monkeys and other animals from his crops.

In another dedicated section of his farm, Retano raises cocao plants. He had minimum interest in this plant until he read the history of the crop in trade school. The cocao plant was introduced to Costa Rica from Brazil 1,000 years ago and thrived until 20 years ago when the fungus Monilia arrived from Africa. The fungus thrives on the abundant jungle humidity. Alex’s plan was to reduce the humidity in the area of planting by cutting down sunlight blocking foliage and composting it. He started work in this portion of his farm six years ago. The first season of production netted just over a quarter ton of cocoa beans, the second year nearly half a ton, year three more than three-fourths of ton, and in fourth year he harvested two and a quarter ton of beans.

The beans grow from tiny blossoms on the trunk and lower branches of the cacao tree. The oval-shaped cacao pods ripen and are ready for harvest in July and August. Harvesting of the cocoa crop on Retano’s farm is done by hand. Retano places the picked beans in covered three-foot by five-foot wooden boxes where they ferment for five days. He stirs them daily to keep the process even. After fermentation the beans are spread in thin layers in long, wood boxes where they will dry for three days. This is the trickiest part of the operation because the beans will be ruined if they are exposed to too much humidity. Purchasing a drying oven is high on the list of Alex’s priorities.

At this stage, beans typically are ready for exporting; but not for Retano, who will remove their shells with a mortal and pestle. Then he cooks the beans in pans over high heat for 20 to 25 minutes until they begin to pop, as with popcorn. It’s chocolate at this point, and he will grind it by hand until moisture begins to appear. He then molds the chocolate into dense baseball-shaped lumps. At this step, the larger producers introduce milk, sugar, and as much as 35 percent palm or vegetable oil, making the chocolate we know in U.S. supermarkets. Comparing Retano’s 100 percent pure chocolate to the product found in grocery stores would be like putting a table wine next to a fine Bordeaux. When asked about the process for making white chocolate Alex laughs. White chocolate, he explains, is a misnomer–it contains no chocolate, only sugar, milk, and cocoa fat.

Retano chooses not to have his operation certified as organic, though the government of Costa Rica surely would approve of his methods. At this point in his plans, the cost of certification is simply too expensive. In addition of paying 2 percent of his annual sales, Retano would have to pay the cost of an inspector, usually $1,000 per visit.

Yet that hasn’t hurt his reputation. His farm has become a tourist draw–nearby hotels and lodges send him guests for tours, for which he is paid a fee. His tours are animated, intriguing and informative–clearly the reflection of a someone thoroughly consumed with his profession.

About the Author: Jonathan Hayward trained as chef at the Culinary Institute of America and has owned and operated restaurants in Central Virginia. He lives in Orange, Va.

A Day in Palestine / Israel by MauFunct