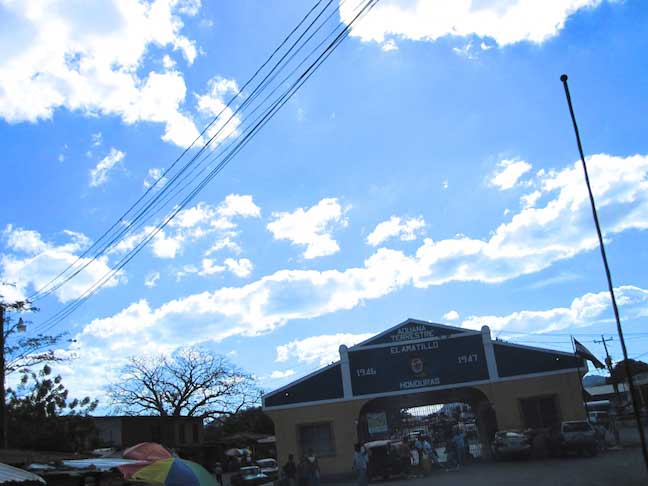 Honduras has the highest homicide rate on the planet, police corruption, and great SCUBA diving. With that being said, and SCUBA out of the budget, we decided to just drive straight through. It was a three country day. We planned to leave El Salvador, blaze through Honduras, and then arrive to Nicaragua.

Central American countries were all very similar. If you’ve seen one colonial church you’ve seen them all, and I’ve seen more than a few, so that’s already too many. Besides, we came to Central America to surf and eat street food. Since Honduras is lacking in surf, we decided we wouldn’t stay.

I knew we were getting close to the border town of Goascoran when we saw the long line of trucks. We passed them in the oncoming lane and cautiously made our way to the front of the line. We were stopped at a checkpoint trying to roll through the gates. All of a sudden, like a handful of rabbits appearing from a magicians smoke cloud, a sloppy gang of men stumbled and shouted in our direction. They wanted to assist us in crossing the border. We hesitantly opted for help this day because time was an issue and our Spanish was fickle at its best.

The crowd approached, they were all shouting and pushing each other, I grimaced at their display, they acted like children. I shouted out loud, to no one specific, “Where’s Ronny?” (At the last border we were advised to ask for “Ronny” to help us.) “I am Ronny,” shouted a chubby mustached man, wearing a baseball cap and jeans. All of his peers patted him on the back, “this is Ronny, Ronny, Ronny,” they shouted. Ronny’s peers appeared to be congratulating him as if he won a prize. The man who claimed to be “Ronny” stepped forward, proud, gasping for air after running and yelling with his fellow comrades. Ronny handed me a laminated ID card with his photo and name, he told me to hold on to it, as a sign of trust. I inspected the ID and took a photo of it, his name was actually Rene. I asked Rene, “Wheres Roonn-eey, your not Ronny.” Rene said “I’m not Ronny, But I know Ronny, he’s not here today, I will help you” I shrugged my shoulders and spoke, “Rene, Ronny, close enough, lets go.” 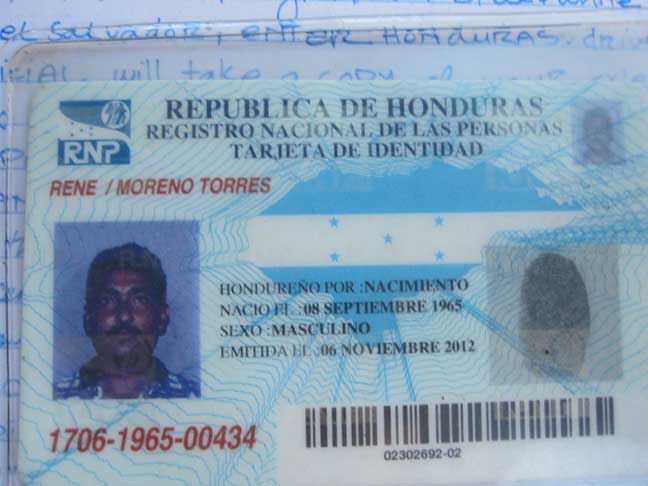 Rene seemed nervous, you could see it in his twitch, he spoke good English, but had a paranoid studder. I did not like Rene, or trust him. I shouted at him, “Lets go man!” He ran around the truck and tried to get in the passenger door, but that’s where my wife Sara sat with Lupe the dog. Rene raised his hands in confusion after I quickly locked Sara’s door. I gestured with my thumb for him to stand on my rear bumper. After I started to move the wind hit his eyes. He squinted and smirked, stuck his chin in the air, like pretentious teenage girl who just won a schoolyard conflict. We drove down the road and began the border process.

As we walked between buildings Rene’s entourage would appear from the dust, assisting him with his work. And his work mostly consisted of telling me what building to go to next, where to make copies, and how many copies to get. During the process Rene’s “Hat Rack” of a friend, consistently tried to hold on to my paperwork, passport etc. I had to stop him, I grabbed it back, and told him, “that’s mine, leave me alone, I don’t want your help.”

I made multiple trips back and fourth from the bank to customs, then immigration, more trips to the copy store while telling Rene’s entourage to “beat it.” I would also have to check on Sara, Lupe, and the truck. It’s hot outside, uncomfortable, scorching, sweaty, there was no shade anywhere, dust from the broken street and the yellow air fogged my view of Sara. I wanted to cross this border as fast as possible; I was running laps between buildings. Sara was surrounded by a shifty group of deranged men, who asked her questions about what we were doing, incessantly poking their heads in our windows. Times like this when I left her alone, I’m glad we had a pit bull to stand loyally by her side. She could accompany me through the border crossing process, but then the truck is fair game for the shiftys and opportunists. Through my eyes, that day, everyone was suspect.

Standing in one more line, I noticed the man who stood next to me. I felt a sense of relief recognizing someone who spoke English as their native tongue. It was hot as hell but he was wearing a colorful leather jumpsuit. I engaged the chap in conversation. He introduced himself as Sean, and stood over six and a half feet tall. He was built like a beast and looked like the type of guy who would drink a can of motor oil. Sean spoke loudly with an Irish accent, “I’m riding my motorcycle around the world, I started in New Zealand,” I raised my eyebrow with intrigue while Sean looked above the crowd, he pointed from left to right, nowhere specifically, and said, “This place is a fucking shit hole, these borders are like back in time,” referring to all of Central America. Sean arrived from the South, the way I’m headed. He said Honduras is the worst border yet. “Safe travels,” Sean said. Then he disappeared into the crowded hot streets.

With some help from Sean I was feeling some relief. The worst border of this trip will soon be behind us, we will soon be out of here. Suddenly the celebration I was having in my head was interrupted by Rene’s friend “Hat Rack” who grabbed my paperwork and passport from the teller at customs. I grab his arm and took back my documents. Now Rene asked for my papers, but I just keep walking. Rene jabbering, insisting that there is one more stamp to get, tells me to follow, with “Hat rack” trailing close behind.

While following Rene, I walk by Sara and truck. Sara shouts “What the fuck,” I just keep walking and respond. “I think we’re almost done, one more thing.”

In many of these countries the police are corrupt. If you get pulled over, cops will make up a false infraction. Up until this point I’ve successfully gotten out of all of my shakedowns. If your vehicle papers are not complete, if you’re actually doing something illegal, successfully exiting a shakedown might be a tad harder. Since bribes are out of the budget I want to go by the books.

“Lets go, follow me,” said Rene, as we walked past some dilapidated buildings. A tire was burning in the street, chickens ran by brainlessly cackling as if trying to talk to me. We walked through a gate to what might be a hotel. Sketchy locals were loitering, they eyed me up and down with sweaty dirt crusted grins. Rene knocked on a door, a woman let him in. I inspected the room before I entered, the lights were off but the white sun beams fought their way through the broken window shades. The woman sat at a desk, with a computer and a printer. She asked to photocopy some papers and my passport, so I handed her the requested items. She made several copies, then pounded some stamps on the papers. A large man entered the room and stood with his arms crossed. They said I needed to pay them fifty dollars for the stamped papers. I was suspicious, so I refused. They refused to give me back my passport unless I paid them. I gave them fifty dollars, I got back my papers, then got out.

As I exited I realized the office in the hotel room was probably fake. The thug with his arms crossed was there to intimidate. The photocopies and stamps were completely unnecessary. I’ve just been scammed. The scam they were running seemed quasi-legit in the moment, but they basically just stole fifty dollars from me.

I quickly walked back to the truck followed by Rene and his crew. I yell at Sara “Lets go!” Rene, Hat Rack, and the rest his crew, huddle around my driver’s side window and waited for a donation. I handed him a crumpled sweat coated twenty, but he demanded more. He yells “this is not enough for all of us,” I tell him “It’s all I got, thanks for your help.” As he babbles, I roll up the window while already moving down the road. I turned on the Air Conditioner and felt a bit of relief, so I pet Lupe the dog.

I was relieved to be back on the road. Away from the border, ready for the next one. Before we drove to far I stopped for some gas. The cost of the gas was 666 lempira. That felt like a sign to keep moving straight to the next border, down the dusty broken road in Southern Honduras.

We paired Dean Moran's story with a yummy recipe inspired by the tale. Go to the next level & eat where Dean Moran been...wait, that sounds a bit off. But you know what I mean! Bon Appetit.

Soaking My Way into a New Year, Chiang Mai, Thailand