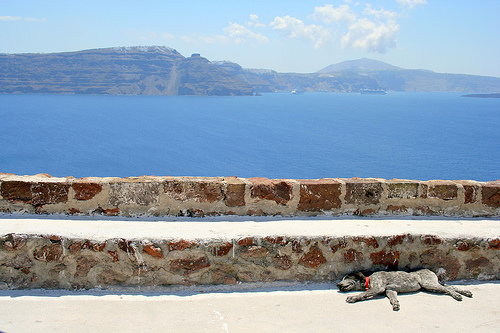 Greece is a country that is, as far as I could tell from the week I had been there, filled with stray dogs. We saw them padding around the streets and snoozing on the Parthenon steps. The island of Santorini, empty of all tourists during the off-off-season of January, was no different. Two black and white dogs had been following us along the beach; though we lost them when we began wandering the streets, looking for a store that sold water since Carrie was convinced she would pass out from dehydration.

[quote]The click of claws on pavement caught our attention. The two dogs who’d followed us before were now trotting towards us, tongues lolling.[/quote]

The houses and stores in the town next to Kamari beach were all brilliantly white with blue trim, the quintessential Greek architecture. But there were no stores open.

The time neared for the last bus to depart back to Fira, the capital and where our hotel was, the conversation slowed. The woman at the tourist office, who had looked surprised to have any business that morning, had made us repeat back to her that the last bus left at 4pm and that after that we would be stranded.

As we came to another dead end, Carrie broke the tense silence.

Back towards the beach we went; walking turned to running, then sprinting as we rounded the corner to the parking lot, as the old bus roared to life and slowly pulled away.
I dropped my backpack to the asphalt and plopped down next to it.

Missing the bus summed up our entire trip so far. We’d only ended up in Santorini because we had missed the ferry we wanted to Crete. We hadn’t even known we were headed to this island when the ferry stopped at 3am and a steward came around to tell us that we had to get off. It had been a beautiful mistake; Santorini was undoubtedly amazing. We had hiked up to the highest point of the island, where there was an old monastery and several radio towers. The ruins of an old city were along the trail and the views around every corner were stunning. We rested from our hike by watching waves crash onto the black sand beach.

But now we were stuck miles away from our hotel; the sun had already dropped behind the mountain, it was getting chilly and things were looking less then stunning. I dropped my head into my hands; I just wanted to go home.

The click of claws on pavement caught our attention. The two dogs who’d followed us before were now trotting towards us, tongues lolling. Carrie had opened a granola bar; they must have heard the wrapper in the stillness of the evening and come to investigate. She broke off a few pieces and threw them over. They snapped them up. I dug in my backpack for a sandwich. I pulled it out along with the map of the island. I broke off a corner for the dogs who both gave little yaps of excitement, took a bite for myself and studied the map. It looked to be about 10 miles from where we were to where we needed to be. If we could walk 5 miles an hour, it would take us 2 hours to get back.

I showed Carrie the map and she agreed with me. We would walk.

We headed out along the edge of the highway in silence. Passing cars honked and people stared at us. We tried to shoo away the two dogs who had followed us. They bounded on down the highway in front of us, then dashed back to make sure we were still coming. They snapped and barked at the cars whizzing by. When one car actually stopped to ask us if we were lost, our friends simply ran circles around it until they drove off.

The conversation started to flow as we decided to give our two friends names: Snappy for the one who most liked chasing cars and Fred for the abbreviations on a sign where the other had decided to mark his territory. We picked up a stick from alongside the road and took turns playing fetch.

Two hours later, tired and thirsty, we got back to our hotel and talking again. Snappy and Fred had followed us the entire way across the island, bringing laughter and life back to our trip.

That next morning, we had to catch the ferry at 8am and there was no way we were going to miss it. We walked into the cool, dark morning with our talking and laughter the only sounds. Except for the click of claws on pavement. Snappy and Fred had heard our voices from wherever they had spent the night and come running to see us off.

Down Home on the Chocolate Farm | Costa Rica