Home Central America Police Cars are Cheaper Than Taxis: How to Seduce a Panamanian Cop... 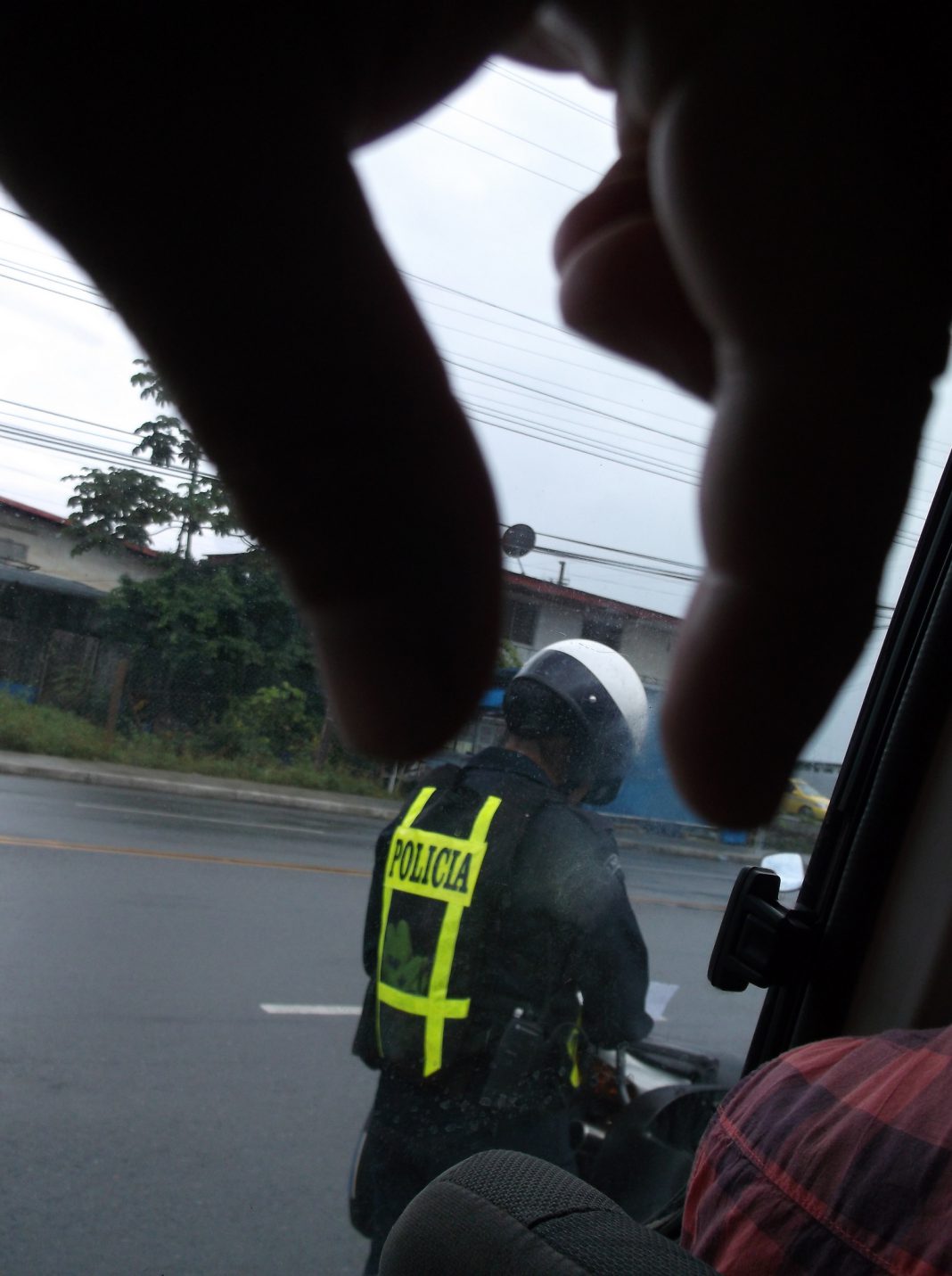 My (platonic) friend Paul and I arrived in Bocas del Toro from Costa Rica. Serving up hamburgers the size of cats and speaking better English than greater Los Angeles, Costa Rica felt like Central America Lite; a haven stubbornly cushioned from the rest of the sub-continent by thick wads of American cash. In fact, with our bloodshot stares and broken flip-flops, Paul and I suspected that we were cheapening up the joint. We therefore hurried through to Panama, which—according to the backpacker grapevine—was centered less on “veneer” and more on “venereal.” Evidently, the grapevine was acquainted with Zarra.

Panama’s provocative grit enticed me immediately. It was southern enough that only the determined backpackers made it—the timid ones having been discouraged or kidnapped a few countries earlier—and the notion of its un-crossable border with Columbia was tantalizing. Paul and I set course for Bocas Town, which was situated on a languid archipelago in the Caribbean Sea. The beaches were the shade of Cartagena cocaine—the buttermilk-colored stuff that penetrates the sinuses with MDMA-like titillation—and the palm trees sprung from the sand like gangly teenagers with frizzled bedhead. We checked into a notorious party hostel, ordered a round of sweating cervezas, and scoped the scene.

We’d been on the road for five weeks. After trekking the screeching Guatemalan jungle, scrambling through crumbling Mayan tombs, and traveling on packed chicken buses in the complete opposite direction than that advertised, we were weary of intrepid adventure. Now, we sought lecherous hedonism and desired a few tanned, hard-bodied individuals to accompany us in our indulgences. Paul was starving for a tryst; he blamed his lack of romantic success on me, claiming that most girls assumed we were a couple and were consequently discouraged.

“Your presence hasn’t daunted any guys,” I countered.

“It takes a chainsaw-wielding pit-bull to daunt a guy,” he replied. “Anyway, this place is teeming with hot chicks. If you cock-block me again…!”

“Relax, I’m on your side—if only to stop you from rubbing one out every night. The squeaking bedsprings keep me awake.”

We surveyed the backpackers milling in the common area and selected our targets. Mine was a sun-bleached Australian surfer whose muscles were like stoats writhing inside a potato sack; Paul’s was a raven-haired Dutch girl whose ass gnawed at her bikini bottoms. They were in the kitchen fussing over what appeared to be scrambled pancakes, and we approached with coquettish smiles.

“I’m Mike,” said the surfer. “And this is Zarra. We’re also just friends.”

Mike and Zarra invited us first to lunch and then out surfing. We hired a couple of long-boards, procured a taxi marino, and journeyed to one of Bocas’s numerous surf spots. After disembarking on a rickety pier, we trundled across rock and root to a sickle-shaped shoreline where lapping waves tickled the toes of waving palms. The cove was ours, and the only glitch in what would’ve otherwise been perfection was the coral bottom that snapped aggressively at our feet—or whatever other body part happened to crash into it as we careened head over teacup in the frothing swell.

“Consider it motivation not to fall off,” suggested the Australian.

And so we spent the afternoon surfing. At least, Mike spent the afternoon surfing—Paul, Zarra, and I spent the afternoon swimming with our surfboards and quoting lines from Point Break. Not that it mattered, since Paul and I were using the excursion as an excuse to glisten wetly in the rose-gold sunshine in hope that our comrades would take notice. It seemed to be going well for me, as Mike seized every opportunity to “save” me from the churning water. Meanwhile, Zarra was all giggles and nipples—although her flirtatiousness didn’t seem to be honed specifically towards Paul.

“This isn’t working. Tonight, we’ll try Plan B,” he whispered.

As with most hostels in Central and South America, cocaine was plentiful for those that knew who to ask—namely the local men twitching in the corners. Sold in straw vials with the bottoms melted shut, the quality was questionable but the price was impossible to refuse. With a couple of grams concealed in our pockets, the four of us ordered a round of drinks and engaged in the infamous game guaranteed to drag everyone’s mind to concupiscent precipices: Never Have I Ever. Unfortunately, said game can be somewhat skewed when played with close friends.

“Never have I ever… ripped off a Vietnamese hooker,” I grinned.

“Hey, she should’ve asked before she went for the happy ending!” Paul cried in defense as our friends howled with laughter. “I’m not paying for a service that I didn’t request. Okay, my turn. Never have I ever… slipped a sleeping pill into a guy’s beer to make him stop hitting on me.”

“That was your idea, remember? And your sleeping pill. Actually, you were the one who dropped it in his glass!”

Zarra and I both swigged our drinks, and Mike and Paul shared a low-five beneath the table.

Shooters cropped up like mushrooms after a rainstorm and it wasn’t long before Zarra was dragging me from my seat. “I wanna go dancing!” she slurred, her breasts jiggling as if independent from her body.

Suddenly, a gossamer blur that was either a fleeing drug-dealer or a casted shadow flickered past our table and the thumping Latino pop hushed to a tinny squeak. Two surly men clutching guns the size of swans thundered into the hostel bar—it was the policía in search of illegal substances, their proprietors, and their possessors.

“Ohmigod, I bet they’ll give us a ride to the club!” exclaimed Zarra. Before we could stop her, she shimmied up to an officer and nibbled at his groin with her ravenous ass. “I loooove a man in uniform. Llévame a la discoteca, por favor?”

The officer’s eyebrows vanished into his hairline. “Qué?”

“C’mon, guys!” To our incredulousness, she tickled him through his bulletproof vest, skipped outside to where the police van was idling, and flung open the rear doors. “Everybody inside! They’re gonna drive us!”

“She’s lost her mind,” I breathed as Mike and a collection of other fantastically intoxicated backpackers dove into the foreboding vehicle. “If she thinks that I’m going to voluntarily climb into a cop car—”

“Have you forgotten what’s in our pants?”

“What’s in my pants is a pair of extremely blue balls. Now get in that fucking van!”

“Ride up front with me, Sue!” called Zarra.

Paul glared menacingly at me and—despite the pressing urge to race from the cops, flush away the drugs, and prepare some warm milk—I clambered into the cab. As it was designed for two, Zarra and I were forced to sit on the officers’ laps.

“Oooooh, is that a gun I feel or are you just happy to see me?”

She tittered and bounced while I attempted to look sultry enough that the officers wouldn’t change their minds and lock us up. In actual fact, they appeared to be just as bewildered as I was. Here was a lascivious bombshell wriggling before them like a salted leech… and they hadn’t even found her stash yet. One spoke in rapid Spanish and the other shrugged, and the van pulled away from the hostel.

Five gut-wrenching minutes later, we arrived at the club. It perched over the sea on a pier, and seemed quite sleepy until the van doors burst open and a crowd of cheering, delirious individuals rushed the bar.

“I knew it would work!” squealed Zarra, smacking her strawberry lips against the officer’s mustachioed face. “Can you pick us up in an hour or so?”

“Just get out of the van!” I cried, and we stumbled giggling onto the dance floor.

The surging adrenaline offered a much more pleasurable high than the shoddy cocaine, and I soon found myself pressed against her. She consisted entirely of swooping curves and firm mounds—and lacked the constraint of a spine, or so her dancing suggested. Furthermore, she smelled of shampoo and pheromones, and I ignored Paul’s scathing stare as I pulled her hips against mine. I’d just risked being thrown into a Panamanian prison; I deserved a reward.

So when she finally leaned in for a kiss, I allowed her tongue to delve yearningly into my mouth. I trailed my fingertips against her nipples and they hardened like hailstones beneath her bikini. When her hand slithered upwards between my thighs, however, I abruptly forgot about the lurching, drunken masses that surrounded us. We staggered what at the time seemed like a respectable distance from the dance floor (it was in fact only a few meters) and pawed at each another as if attempting to swap skin. She unzipped my shorts and plunged her fingers inside of me—three knuckles deep—and I sunk my teeth into my palm to stifle a moan.

“Lie down,” she commanded.

I obediently dropped to the ground and she yanked my underpants to my knees. Yet I was entirely unaware of the wooden splinters quilling my thighs like cactus needles, for she was licking and sucking my body. The pressure built with rocket speed; yes, please yes, god yes, YES—!

Suddenly, and to my utmost dismay, she lifted her head. “The police are back! C’mon, let’s see if they’ll drive us home.”

But my lament fell upon the deaf abyss as she was already skipping towards the van. Groaning, I redressed and lumbered after her.

“Not quite. You may want to wear earplugs tonight—I apologize for the squeaking bedsprings.”

We paired S. Bedford's story with a yummy recipe inspired by the tale. Go to the next level & eat where S. Bedford been...wait, that sounds a bit off. But you know what I mean! Bon Appetit.