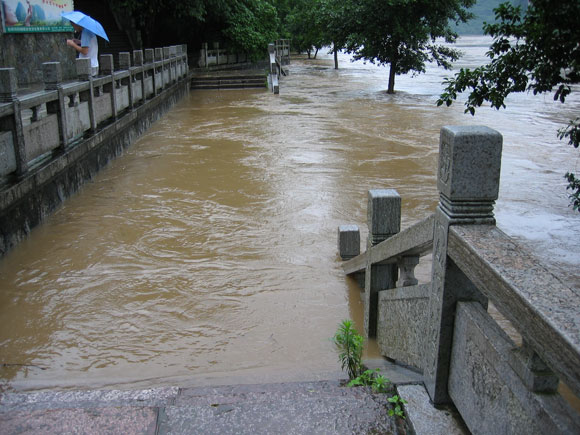 The train that I needed, the train leaving from Guilin in the far south of China and running to Nanjing in central eastern China, left at 2:50 a.m. I had no idea what I was going to do between 11 a.m., when I had to check out of my hotel, and midnight, when it seemed reasonable enough to go to the train station. To top things off, Guangxi Province, which contains Guilin, was in the midst of the monsoon season and having copious floods—256,000 people had to be evacuated just two days after I left the region.

[quote]At this point the lady working in the tea lounge began to take an interest in me. Why on earth was that foreigner removing her footwear and brandishing a heap of wet wipes at her bright red feet?[quote]

I checked out of my hotel at around 10:45 a.m. and spent an hour or two on the lobby’s computer, sending emails and wishing that people were awake on the other side of the world. I stored my bags in a luggage rack in the lobby and took my very cheap, very flimsy umbrella outside with me. It had rained sixteen inches during the night and it showed no signs of stopping. I took a walk and shopped for souvenir gifts to bring home for the next five hours. When I couldn’t carry anything more and was saturated with rainwater, I stopped at a café to eat a banana-chocolate crepe and write in my journal.

I whiled away the rest of the day by taking buses around the city, wandering the streets, and learning the true definition of ‘drenched’ after my $2 umbrella failed me completely. When night fell, I took a cab to the train station. It was after midnight and I had just bought new shoes. I went to wait in the tea lounge and lovingly unpacked my beautiful, dry shoes. I peeled off my disgusting, reeking, soaking old shoes, which were bright red, to find out that the pigment had been seeping through all day and I now had brilliantly pink socks and feet that looked like they had been taken to with a butcher knife.

There was only one thing to do. I had an entire table all to myself, so I took another chair and made a careful stack of the new shoebox, the old smelly shoes, and the foul socks. I then pulled out a container of wet wipes and applied them to my bare feet, scrubbing vigorously to no avail except to slightly relieve the smell.

At this point the lady working in the tea lounge began to take an interest in me. Why on earth was that foreigner removing her footwear and brandishing a heap of wet wipes at her bright red feet? She wandered over to me and observed for a moment. When she concluded that I was trying to wash my feet, she alerted me to the fact that there was a restroom off to the side of the waiting lounge, with a sink in it. “Oh, no thanks,” I responded in Chinese. “I think I’m doing all right.”

She insisted, so I followed her over to the restroom. I thanked her for showing it to me and then hoisted one of my feet up over the basin of the sink, turned on the tap and began to rub at it with my hand. The red color seemed permanently stained in—I couldn’t do a thing about it. “Wait a second!” the lounge attendant cried, rushing out of the room. She returned a few seconds later with a chair, and placed it right in back of me, so I could sit while washing my feet. “Thank you,” I said.

“Hold on,” she said, and rushed out again. She scuttled over to the opposite corner of the tea lounge, where she grabbed a red bucket and filled it about halfway with steaming hot water. She brought the bucket back, pushed me down into the chair, and turned on the cold tap water to fill the rest of the bucket. Then she plopped the full bucket down in front of me. “There,” she said rather proudly. “Now you can wash your feet.”

The water was splendidly warm and it felt fantastic. I washed the feet for about the next ten minutes but only managed to get about half the color out, and on one pinky toenail it didn’t completely disappear until about three weeks after I returned home. I dumped out the water and headed back into the waiting lounge, where I put on clean, dry socks and the beautiful new shoes I had just bought. My feet felt sensational.

I wrote in my journal for an hour and a half, telling the story of the wonderful lady in the tea lounge, until I put my head down on the table and fell asleep. It was about one-thirty in the morning. About twenty minutes later a big noisy group of Chinese people came in the tea lounge and started talking. I put my head up and must have looked very groggy and confused because the attendant lady hurried over to me and said, “It’s not time yet for your train! You go back to sleep. I will wake you up when it is time for you to go.”