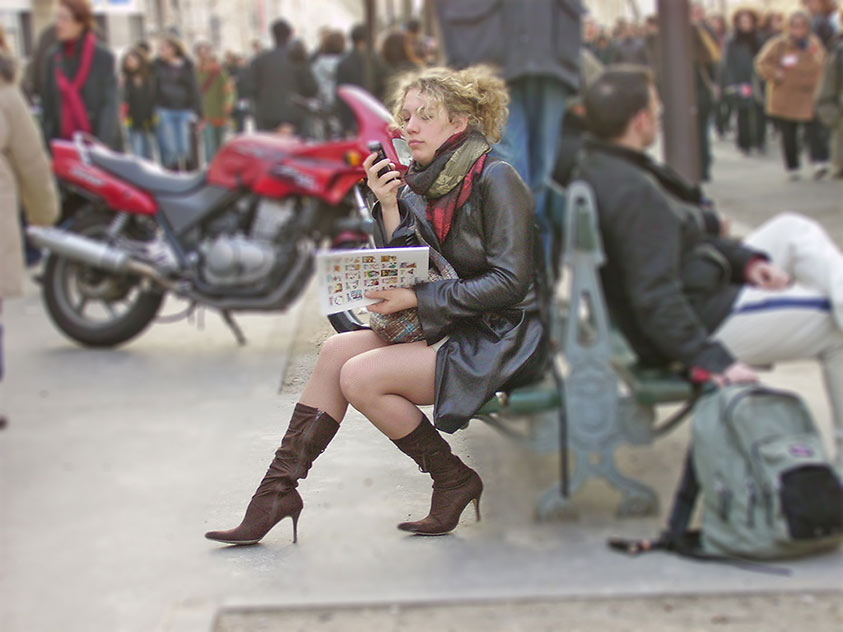 On my first full day in Paris, at the start of my first solo trip overseas, I wore the one dress in my backpack, and left my long hair loose, trying to not look like a tourist (as you do). I was 22 years old, and about as naive as they come. The hotel was in Montmartre, so I wandered up into the streets behind the hotel, towards Sacré Coeur. I found a plaza that was full of street artists, and as I walked through, a man who was in his 40s pointed at me and yelled “You!” As far as I could tell, I hadn’t done anything wrong, but I jumped and my heart started pounding. He was trying to sell me a portrait sitting. I declined politely and tried to leave, but he was persistent. He took about five minutes to decide he was in love with me, and that I was the most beautiful girl he’d ever seen. He followed me around with puppy dog eyes. Ahh, the French. It was gross. He asked several times to be allowed to draw me, and in the end I gave in, on the condition that I wasn’t buying the drawing. It took an hour to lose him.

I walked the last few minutes up to Sacré Coeur, the beautiful, blindingly white Roman Catholic church and basilica that overlooks the city. I sat on the big concrete stairs down in front of the basilica, listening to a live band. It was one of those perfect moments, when you arrive somewhere you’ve been dreaming about. Then a young guy, sitting a little way away from me, started calling and waving to me. I ignored him for a few minutes, then gave in and looked at him with an unpleasant expression on my face. He asked for a lighter. I said no. He came and sat next to me, and suddenly I had a new cling-on. He was like the street artist, in love with me after five minutes and frustratingly difficult to shake. In the end, I stormed off rudely. Luckily he didn’t follow me.

Back down on the main road that links Montmartre and Pigalle, as I headed towards a park I’d read about, I was double-teamed. When I think about it now, I imagine that the men only wanted to get me into their shop, but they went about it in very much the wrong way. One stepped in behind me, and one stood in front of me and grabbed my wrist as I tried to step past him. There was traffic streaming by, right beside the curb, and neither of the two men would let me pass. As you might imagine, I panicked. The guy holding my wrist was trying to drag me through a small doorway, while I struggled like crazy. I managed to break out of his grip, glared at him in a way that probably gave him nightmares, and escaped across the road in the next gap in the traffic.

After I’d been to the park, I decided to head to la Tour Eiffel. The icon of Paris. I had calmed down by the time I got there, having not been waylaid or assaulted in a good hour, and I was over the moon to be standing under one of the most recognizable monuments in the world. A man standing near me said “C’est grande, non?” I barely responded, but he came closer and asked again in English. I was still too naive to just ignore him, so I kind of grunted. He grabbed me by the elbow and ‘suggested’ a walk by the Seine, then pulled me away. It happened so fast that by the time I started to react he’d already got me well away from the crowd.

This man told me that he was Egyptian, and going by his dark skin and eyes, and by his t-shirt (which had hieroglyphics on it), that was probably true. He was about six foot tall, stocky and strong.

Down by the river, there were a lot less people than there had been around the Eiffel Tower. And a lot fewer heavily armed police officers. I can’t believe I let him take me away from right under their noses. He took me along a pathway, which was away from the edge of the road. And he wouldn’t let me leave. “I just need someone to talk to” – but then he would sit down and light a cigarette and not talk. At all. I got angry again pretty quick. After twenty minutes, I was furious. I stood up and stormed off, back in the direction we’d come from. But this guy did follow me. He grabbed my hand and didn’t let go, and when I continued the charge, he yanked on my hand and stopped me. He sat me on a wooden bench, and started again on the “I really, really need to talk to you” production, the cigarettes, and the not talking. Within a few minutes I was off again. This time he grabbed me and told me very aggressively, right into my face, that we were going to a café. He dragged me across the road and into the nearest café.

Being as green as I was, I thought the café would be like we have in New Zealand. So I’d figured that I’d be able to run away while he ordered at the counter. Of course, it wasn’t the same as New Zealand. He sat me at a table right next to the door, which had a pillar between it and the counter, so the staff couldn’t see what was happening, and he sat opposite me. Anger had turned to absolute fear, and I was shaking violently. The waiter appeared, and the man ordered an espresso and then asked me what I wanted. I asked for lemonade. The waiter bowed and scraped and vanished. The man offered me a cigarette. I declined. Our drinks came. The waiter disappeared again. The street was empty and the staff had no idea that anything was wrong when he decided he was going to kiss me. I said no. He said yes. He was very frightening when he was angry.

By now, he had ‘invited’ me to see Place de la Concorde and the Egyptian obelisk. He mentioned that he lived nearby. I was so scared of what he’d do to me if he managed to get me anywhere private. I said “Wow, I really need to go to the bathroom”, in this crazy, overly upbeat voice, that didn’t even sound like my own. So – get this – he stood up and took me to the bathroom.

I locked myself in for a few minutes. I don’t remember even being able to think, I was so scared. Eventually I unlocked the door and crept out. And here’s where my luck finally turned. He’d gone back to the table behind the pillar, and he couldn’t see me. The bathroom was downstairs, so I hovered on the stairs, crouched against the wall, and the first person to walk by was one of the waiters. My French, despite all the years of lessons, never really got very good, so I flagged the waiter down and asked him “Parlez-vous anglais?” He said no. At that moment, I thought I was a goner. “L’homme…” jabbing my finger towards the table I’d been sitting at, “…il…” and right there I ran out of words. So I grabbed my right wrist with my left hand, tight, and shook it at the waiter. He gaped first at my hands, then at my face. He signaled to me to follow, and took me through a corridor to the back door. Which happened to be right next to the front door. The waiter said “I…. open door, you….”, and I filled in “I’ll run”. He looked at me, then pushed the door open.

I have never run so hard or so fast in my life. I heard a man yell behind me, but I didn’t even slow down. I turned the first corner I came to, then the next, then the next, in random directions. Somehow I wound up back at the Eiffel Tower. Now, of course, the men with the huge guns took notice. They grouped together and stared hard at me as I ran towards them. There was no way my French could stand up to an inquisition from the police, and being shot would’ve really just capped my day off, so for the first time since I left the café I stopped running and looked behind me. I walked past the first group of officers, trying to haul air into my lungs. Then I stopped, pulled out my map, and found the nearest Metro station. The 45 minute trip back to my hotel was terrifying, particularly when I had to change lines at the Place de la Concorde stop. I was too scared to leave my hotel room for about 24 hours.

Since then, I’m probably too cautious about talking to people, and I tend to blank most people who speak to me when I’m alone. I traveled for another three months without any more incidents as bad as this, and have since had another two solo trips. I’ve been back to Paris, and even to the Eiffel Tower, although I certainly didn’t go alone. Take it from me – be wary of strangers!

In Search of the Nomads of the Jade Sea, Turkana