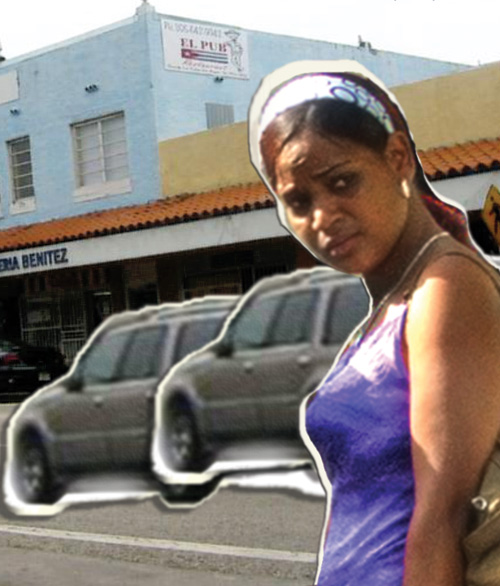 The east bares a one-way procession of steel: the red, the blue, the black, the forest green, the rusted brown car roofs glisten, or not, as they stop and go down Eighth Street. Cars sit in lines in between the El Havana’s, Medallion’s, La supermercado’s , La Cosa con Cosa y Mas: the storefronts of Little Havana. Traffic is at its normal rush hour pace. The many frustrated faces behind air-conditioned windshields divulge that patent countenance of understanding one’s surroundings. The few that walk its sidewalk are directed by their own awareness of the neighborhood. The public commuters know the 8 line will take them to where they want to go and hide under the shade without stepping out into the blazing sunlight to double check their course at the bus stop’s map. But amidst the common day and regularity of today, a girl, pale as snow, dirty blonde hair and blue eyes, clad in her jeans, t-shirt, back pack and holding her crumbled map of Greater Miami-Dade stands at a loss, jealous of all locals. That girl is me. Sticking out like a sore thumb, standing at the corner, awaiting some kind of miracle.

Yes, I am white. White as milk but why the stares? Is it because I have blonde hair, blue eyes or because I’m the only white girl with blonde hair and blue eyes to have come off this bus alone?

I have made my way from Minnesota to south Florida via a greyhound bus. It took six days of stale air, stale feet and stale food—burdened by the occasional drunk wanting to tell stories of their Miami escapades. But I smile and nod when they’re passionately retelling me it; wearily attentive of their staggering body movements and heaving strings of saliva that’s entering my cramped personal space.

You’re asking: so why bus? The novelty maybe. The adventure of trekking across the good ol’ U S of A to see my country’s land. I’ve flown many times before and there was nothing exciting about it. Yes, we’re being hurled hundreds of miles per hour through air, but it’s quick and short; a few hours, three or four drinks and that’s it…get off the plane to pick up your bags and roll them out to the departure area to hail a cab to take you to your chocolate pillow hotel room that has free internet, a courtesy snack bar, pool and shuttles to downtown. I could’ve had all that had I chosen to fly and not just wing this trip and play it by ear. “Who knows? But isn’t that what life is about?” I can hear myself saying that when I told my friend about my upcoming MIA excursion. “I’ll take the bus down there and that’s it, I’ll be down there, with no direction to go, and I’ll find a hotel, and it’ll be soo great!”

I arrived in the Greyhound station at 7pm. As I stepped off I felt like I was some kind of celebrity: heads turned, eyes concentrated solely on me, I was the crowd’s attention as I step foot on Miami. Yes, I am white. White as milk but why the stares? Is it because I have blonde hair, blue eyes or because I’m the only white girl with blonde hair and blue eyes to have come off this bus alone? I know Miami is not like Minnesota, not even in the same league, but I can handle myself, I’m 21, and equipped with reasonably well working common knowledge…

“Oooh, sweetie you’re in the wrong neighborhood.” That remark quickly set off alarms. Isn’t that thing said when you’re just about to be mugged

This brings me to where you found me, immersed in the middle of Little Havana with sweat running down my back. Waiting for one of the Virgin Mary statues sitting on the window display of a shop to materialize and point the direction of the Carnival Center to me.

It seemed very simple. My plan was to visit little Havana, then check out the Carnival Center which was recently built. The only problem with that was actually finding a person who spoke English. Granted I did find English-speaking natives though the only thing was they didn’t really know where it was…they simply responded “Aqui Tenemos el Carnival”. Still lost. But I managed to decipher it after the next reply. “Mijita, etts gowing chew ve ere manana.” Manana = Tomorrow. Got it. Carnival is going to be here tomorrow?

Now I’m definitely lost. Was there a center built? I saw the picture. It was a building. Should’ve gotten an address.

There I was stuck with my things in tow. My backpack which is thankfully off my back and now rolling behind me (thank you inventors!). I look for another person to ask. But nada. Everybody is pretty much comfortable in their cars with AC blowing in their faces while I twist in the scorching heat looking for that Miamian that might know where this center is. I pass a dubious couple waiting at the corner. She looks Hispanic, Dominican, scantily wearing a short cloth for a skirt, the color is faded as well as her tube top that is being pushed down by her sagging breasts. She looks to be around her late thirties. The man is younger looking, about ten years. He sports white sneakers, white hat, a navy blue oversized shirt and baggy beige pants. I quickly pass them with head down noticing I wasn’t any interest to them but briefly to the man that gave me a tongue-sucking-on-teeth sound when I passed. Desperation set. I was not going to find anyone on the streets now. The sun is setting and traffic is letting up. I turned back to ask them the question of the day.

The lady’s scuffed heels were what I first glanced back at—they were old, very used –then my eyes drew quickly up to her face. She pulled her eyes from the street and set them on me. I can see the man behind her eyeing me close-lidded, I thought I heard another sucking sound coming from his direction.

I’m sorry.” I said trying to make myself feel comfortable about asking a stranger that’s seems to be more involved in something other than giving directions. “Uhm, do you know where the Carnival Center is?”

“The what?” She said wincing one eye and turning her head to a side.

She thought for awhile turning her eyes downward then up at a car that passed honking. “Oh yeah…Isn’t it that thing they built in downtown,” she turned to the man.

“Uh huh.” Thhnnneeett another tongue sliding off teeth noise emanated from him as he glared at me.

That remark quickly set off alarms. Isn’t that thing said when you’re just about to be mugged, I quickly thought ready to spring out from there and into the street to plead for help. But I was comforted by her next response.

“It’s ok.” Ahhh, I thought no Miami horror story for me. “Just take the 84 bus down to downtown and take the 64. You’ll be smack right there.”

“Thanks. Really thank you. You guys are the only ones that could tell me where this place is. Everybody said that it’s here tomorrow, whatever that means.”

“OHHHhh…no way….,”she laughed loudly and said something to the teeth sucker in Spanish. He laughed out loud too shaking his head wildly.

“Mami, tomorrow is Carinvale Miami, Calle Ocho. It’s a party that’s going to be here. Then she pointed towards a sign on a lightpost…Calle Ocho Carnivale Miami.

I just looked and shook my head. “Oh. I get it. Great. Have to check it out. Thanks.”