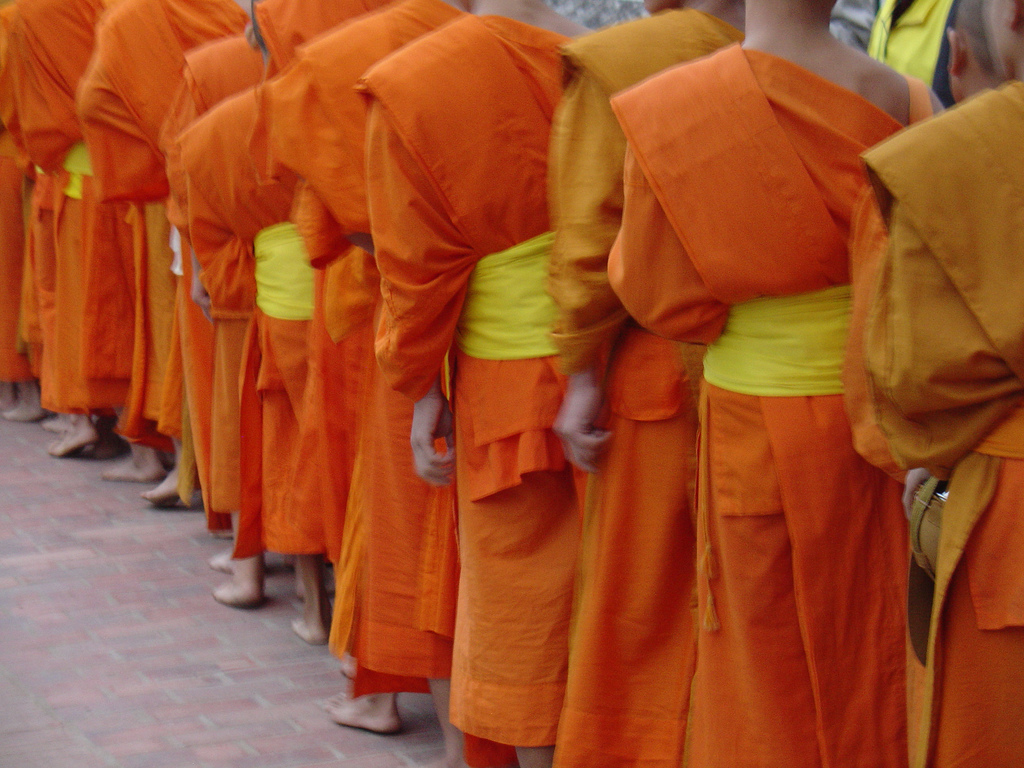 In the weeks that followed, I would always refer to him as He.

It was across an impeccably sun-dappled street that he first raised two stubbled arches where his eyebrows should have been in greeting. The saffron robe that left one shoulder bare rendered this initiating salutation faintly inappropriate.

I dropped my eyes and fled from the imaginary forces that were about to swoop down on my corrupt soul.
__

His voice is a liquid chime steeped in ancient serenity. It spills over and opens my eyes to the secrets crumbling inside the temple walls before leaping off a perennial fixture:

“Where are you from?”

“And how old are you?” An inevitable sequence in the unbreakable, unshakable chain.

“But you look younger.”

My shrug is invisible. At my age, such comments arouse nothing but ambivalence.

I imagine him in a hundred-year lotus meditation that ends with him rising from the water without having aged a single day.

“What made you decide to become a novice?”

He thinks for a while. “To repay kindness.”

Being a predominantly agricultural society, the temporal loss of a son in Laos is an indubitable sacrifice that accumulates merit for their families.

“What do you like to do in your free time?”

“I…” In the midst of a hasty penance, I attempt to think of an appropriate answer.

And as though sensing my discomfiture at his quiet erudition of my irreligious frolics, he grins.

“For me, I will study Japanese language. But I also like to watch movies…I like violent movies…Batman, Spiderman…”

With an unexpected sigh the lotus descends into the rippling waters down below, fragile as a spider’s breath.

“Have you been to many other countries?” He looks so wistful that I tell him I hope he gets to visit Japan someday.

At this, he almost smiles. It is oddly benevolent.

“Yes…But it is difficult because a passport is not easy to get, not like Singapore… The government wishes to keep us inside.”

He stops. It is so very abrupt that I nearly trip.

Instead, I ask him whether Lao novice monks are permitted to eat meat. It tickles him immensely.

“Of course! Not like Chinese monks… There are only ten rules for novice monks.”

He clears his throat very solemnly.

“The first is no killing.”

“Not even mosquitoes?” I ask, while desperately trying to ward off a stealthy guerrilla attack.

At his gentle unspoken admonition, my contrite hands take on a feeble flapping tendency. He notices and smirks so gently that I’m not quite sure what to do with it.

So in return, I notice his unusually even teeth. They make me think of bathroom tiles and picket fences.

“…And the last one is no alcohol.”

Having concluded his recital, he clears his throat again. “Which of the ten do you think is the hardest?”

I turn his question over in my mind. It pierces with a frightening clarity into weaknesses that have been folded into squares and carefully tucked away in dark, secret places.

But curiosity is a curiously impatient creature.

“…No marriage?” he eventually ventures.

I attempt to stifle a laugh but am only marginally successful.

“In India, it is the women who have to pay the dowry so the Indian men are lucky.” He shakes his head and grins again before telling me about his friend, a Japanese monk who has a wife and two daughters.

I try to remember the shape of that grin. It fascinates me that even after all this while, I am unable to fully comprehend his face.

But the passing of time brings with it a belated shyness so we abandon the question to linger in half-existence and stand in silence, watching the sun’s dying light seep slowly into the grass.

“When are you leaving Luang Prabang?”

He nods, but I’m not sure why.

“Sok-dee” I say, offering my attention to his earlier language lesson as a parting gift.