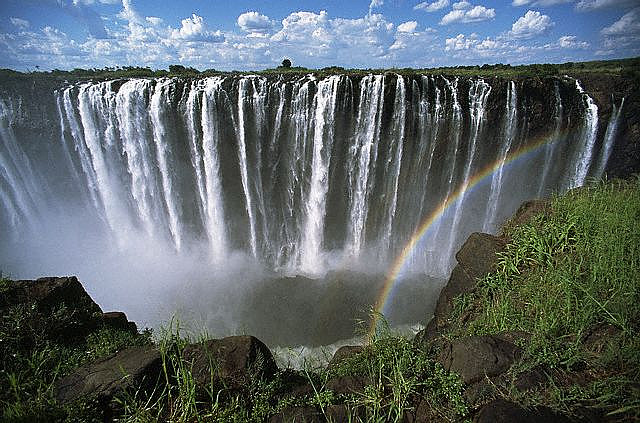 I stood trembling at the brink of the waterfall. The roar of the water rang in my ears as it rushed past me on a collision course with the jagged rocks 360 feet below. “Jump!” Four men, with weather-worn faces, stood menacingly behind me. “Jump!” My feet involuntarily switched into reverse… no bloody way! I felt a firm hand in the small of my back. “Jump!”

[quote]..the pull of the current meant that I was actually being pulled gradually downstream. As I reached the rock, I felt strong arms grasp me from above and I emerged, spluttering, from the murky depths.[/quote]

This wasn’t what I signed up for back at the hotel in Livingstone, Zambia. While my friends eagerly signed up for white water rafting, I had opted for a more genteel activity for the afternoon – high tea at an island at the top of Victoria Falls, one of the seven natural wonders of the world, and a refreshing dip in a rock pool.

It had started well- I waved my friends off to their afternoon of vomit-inducing action, and was picked up shortly thereafter by a friendly tour guide. At the meeting point, on the banks of the Zambezi River, I was joined by three excited, slightly nervous looking Germans. I wasn’t sure what they were so anxious about – the canoe that awaited us looked sturdy enough. A guide handed me a disclaimer to sign- it contained the usual blurb, the tour guides were not liable for injury or death – what was I gonna do, choke on a cucumber sandwich? I scrawled my name and boarded the canoe with high spirits, thinking of the altogether more turbulent canoe experience my friends must currently be enduring.

We were taken to a small island that perched 80 feet away from the thundering heights of the Falls. Our smiling guides led us across the island, and the trees parted to reveal our dining room: an awning shrouding a dining table, adorned with cakes, champagne, and colonial-looking china crockery. Very civilized – and in sharp contrast to the breath taking view- from here, you could see the river turn from glassy smoothness flecked only by the occasional rock to fizzing, spitting froth, as it sprayed by the gallon over the edge and plunged downwards. No one who has ever fallen from Victoria Falls has survived. I mused this as I nibbled absent-mindlessly on a cupcake.

I was still chewing when one of the guides made an announcement. “Before we enjoy high tea, we will go for a swim in the Devil’s Pool”. I smirked to myself at the name – it seemed out of place amongst all the quaint civility. We were led across the island once again- this time towards the waterfall. The trees started to drop away around us, and soon the earth did too, until we were hopping from rock to rock as the water flowed beneath us. “Stop!” I looked around expectantly- where was the canoe? I could hear the roar of the waterfall in my ears. “Now we swim to the Devil’s Pool”. Hold on a minute… swim? In the river? In the river that, 80 feet away, was flinging itself over a cliff 360 feet high? I looked incredulously from the guide to the Germans, who were solemnly stripping down to their swimming trunks. I watched even more incredulously as they and three guides gingerly slipped into the water. “Remember to swim upstream; else you’ll be swept over the edge”! What the heck? What kind of operation were they running here? Back home you couldn’t do this! But this wasn’t home, this was Africa. And right now one remaining tour guide was halfway into the water and stretching out his hand to me. I’m not sure why, but, as if in a daze, I took his hand and let him pull me into the river. I instantly felt the tug of the current, and fear rose up into my throat in a hard knot. The water rushed around me, the sound roaring in my ears, almost as loud as my own heartbeat. “Swim!” yelled the guide. Was now a good time to mention that I wasn’t a strong swimmer? Was now a good time to start believing in God? My panicked conversion was cut short – I could feel myself being pulled, no, dragged, towards the sheer drop of the Falls. I started paddling for my life- literally. Adrenalin took over and I swam, terrified, across the river, to a huge rock upon which my fellow adventurers were clambering. I was swimming directly upstream, but the pull of the current meant that I was actually being pulled gradually downstream. As I reached the rock, I felt strong arms grasp me from above and I emerged, spluttering, from the murky depths.

A few moments of bleary eyed gasping later, I began to take stock. I was now much closer to the edge of the falls – maybe 20 feet away. The water on the other side of the rock was much deeper and angrier. Away from us, towards the edge, was a thick reef of rocks, reaching right to the lip and rising above the spray. Our guides already leaping across them, towards the waterfall plunging over the precipice. The Germans, still solemn, started to hesitantly follow. I looked around – there was nowhere else to go. So, reluctantly, I got to my feet and took to the treacherous path.

About four feet from a horizon that made a sudden change in direction and became a vertical, we stopped. To our left and right, the water was foaming and angry – except for a curious area of smooth looking water immediately to our right. Here, the froth seemed to swerve away, around an invisible barrier, and the water in this spot poured smoothly over the edge. “Hey everyone!” a guide yelled. “Look!” And with that he promptly threw himself into the water, inches away from the vertiginous brink. My hand flew to my mouth. One of the Germans shrieked. Had we just witnessed the untimely demise of our guide? Several long, surreal seconds later he resurfaced, smiling, appearing to float in the water right where it slinked over the edge and into misty oblivion. What on earth….? And then I saw, just below the water’s surface, the rock mass, about half a foot thick, separating him from certain death.

The roar of the water rang in my ears as it rushed past me on a collision course with the jagged rocks 360 feet below. “Jump!” Four men, with weather-worn faces, stood menacingly behind me. “Jump!”…

The Children of the Amazon, Ecuador’s Oriente