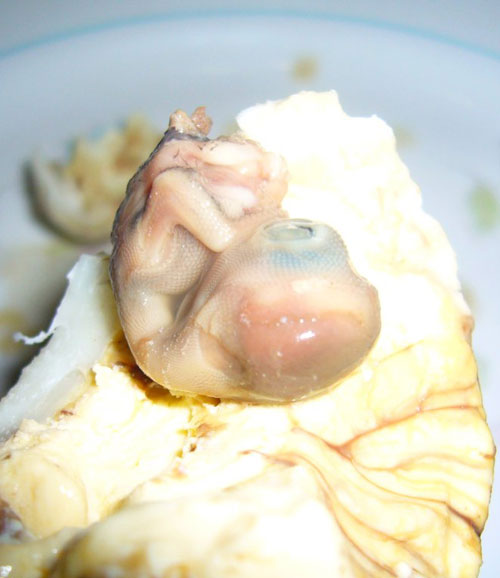 Aliens. Some people think they exist. Others claim to have seen them. A rare few swear they have been abducted by them.

Me? I’ve eaten them.

The manly way to eat this little alien is to close your eyes, pray to God for forgiveness for all your sins, and devour the balut whole.

The word for ‘Alien’ in the Philippine language, Tagalog, is ‘Balut’. Though I might not have translated that as accurately as the dictionary definition. Eating Balut is a right of passage for any foreigner delving into the heart of Philippine culture, though most foreigners refuse to eat Balut once they have seen with their own fearful eyes just how intimidating this food is, if it can be described as food at all.

Balut can be bought pretty much anywhere, especially from street vendors who regularly trawl the streets shouting “BALUT! BALUT!”. The Balut-Virgin, often after a few strong drinks, will see from the outside that balut does not look at all scary, perhaps even inviting. Surely it is nothing more than just a tasty egg ready to be de-shelled and sprinkled with salt begging to be swallowed whole with the Balut-Virgin’s next San Miguel.

But how wrong the Balut-Virgin. How far off the mark could they go. The balut stares back at them tantalizingly reeling-in the victim to strip off its shell and see the full force of horror that lie beneath.

And only once the shell is peeled does Balut-Virgin discover that aliens do exist, and they live in the Philippines, in little egg shells. But now it is too late and everyone is watching Balut-Virgin in the screaming silence that accompanies that very moment when you wished you could invent a time-machine, step into it, and go back even 5 minutes into your previous comfortable life.

The manly way to eat this little alien is to close your eyes, pray to God for forgiveness for all your sins, and devour the balut whole.

And only then does one of two things happen. Either Balut-Virgin sinks into the dark depths of hell, unable to chew the slimy residue of 14-day old aborted duck fetus and spits out or throws-up the balut. Or a quiet calm overcomes them as the delicious as yet undiscovered flavors overwhelm their palette like nothing else before. No food will ever taste the same again. Everything on Planet Earth will seem bland, boring, devoid of anything remotely approaching the seduction of balut.

The Balut-Virgin is virgin no more and though this snack may seem alien to anyone outside the Philippines, it certainly tastes out of this world.

ABOUT US
Travel stories are our passion. We love sharing the best travel experiences from travelers that have been around the world, gone for the first time out of their city, or just gone for a weekend trip to the islands. Enjoy these tales and share your own experience.
Contact us: pushon@onajunket.com
FOLLOW US
© On A Junket 2017 | Travel Stories, Travel Adventures & Experiences | Website by GRAVITYGONE
MORE STORIES