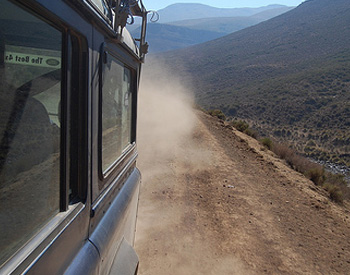 One lovely January day, I found myself in a minibus ride practically flying low on a Lesotho mountain road, wondering whether the holes in the windshield were caused by bullets or good-sized stones combined with breakneck speed.

[quote style=”boxed”]..I saw an arm waving something at us from the passenger side of the car. Something shiny! I knew those were bullet holes! And I was obviously in the middle of a shoot-out!”[/quote]

I’d just spent a few days up in Malealea riding around in the mountains on a lovely little Basotho mare, experiencing nature and all that. Nice as it was, though, a couple of days of peace and quiet was enough. Just a girl and her horse gets lonely after a while, so I was anxious to move on to where the crowds were. I wanted to return to Joburg, so I took off in the general direction of Maseru Bridge and the border.

Having lugged my backpack down to the main road junction at Motsekuoa, a fair distance in the midday sunshine, I looked for one of those mini buses I’d been told passed all the time.

Not a bus was in sight, so I sat on my pack and waited. And waited.

After an hour or so, I was joined by a girl and a boy, both about 4 years old, and a tiny baby tied to the girl’s back with a blanket. The boy asked my name, and I seriously regret giving it up. “Sophie, Sophie, Sophie,” he said; cute to begin with, infuriating after the 100th repetition.

As I sat there waiting for my ride, I pondered the friendly, trusting Basotho people. On my way to Malealea a few days earlier, the bus from Mafiteng was filled to the brim, but the driver wasn’t about to leave until the tiniest little crevice was packed. Through the windows, peddlers were busy passing sausages, Polish vodka, barbed wire, 10 kg bags of biscuits, brightly coloured Basotho blankets, jewellery and eggs. Money was passed back through several hands. It didn’t seem to occur to anyone that someone along the way to the window might pocket a maloti or two. Peddlers even ran after the bus to return change.

Meanwhile, I was still at Motsekuoa, waiting for a bus. Occasionally, a car would come by, offering to give me a ride – to Malealea. Apart from that, I didn’t see a soul. Four hours had gone by and I was beginning to wonder if I had ended up in the Twilight Zone.

By now, I was also developing a serious sunburn. The little darlings pointed at my increasingly red nose and laughed, all the while repeating “Sophie, Sophie, Sophie”. I was seriously considering a name change, when a bus going in the right direction finally showed up.

Usually, these buses run with a minimum of two people per single seat. Overloaded vehicles and road safety in general do not seem to be major concerns. Bracing myself for that forced intimacy, I entered the bus – and saw to my relief only two other passengers. As we rode off towards Maseru, I noticed that both riders were cheerful young boys. Very young boys, 14 or 15 perhaps. As was the bus driver!

While I pondered this and considered getting off, he suddenly spun the bus around and went the other way.

I repeated the question twice before one of the kid passengers turned around and said something incomprehensible. My knowledge of SeSotho is limited to “greetings sister”, “thank you” and “I don’t have any”, none of which seemed appropriate.

He raised his voice and repeated … whatever he said, and it dawned on me that he wasn’t speaking to me. Instead he was telling his mate at the wheel to get moving. At least that was how the driver interpreted it. I hung on to the door, but to no avail. The door panel soon ended up in my lap and screaming seemed a definite option.

Even the king wasn’t immune to the hazards of driving in Lesotho. He had died driving off a mountain road here some years earlier.

While the driver kept up his Ayrton Senna impression, I noticed a car on our tail. Had these kids pinched the bus or something? Glancing quickly over my shoulder, I saw an arm waving something at us from the passenger side of the car. Something shiny!

I knew those were bullet holes! And I was obviously in the middle of a shoot-out! I could almost hear the told-you-so from friends who said not to travel on my own in Africa. They should have seen me now. I was scared, angry and just a tad nauseous. What if I threw up all over the driver, would that make him stop?

With those men right behind us, did I even want him to stop?

After a while, I realized there wasn’t any shooting and as we approached another road intersection, my guy spun around while screeching to a halt. This spinning around seemed to be a hobby of his. The car behind us stopped and a man approached us with the shiny thing, which upon closer inspection was a metal box.

It turned out my guy was indeed a bus driver, of legal driving age, who forgot his lunch. The man slapped my back, laughed out loud and explained that he was the guy’s father and this whole thing was just a bit of father-son rough-housing. They did it all the time; although, he had to admit, rarely with foreigners in the bus.

Change of Rules for the Mile High Club. You can just...