Colombian. Italian. Venezuelan. Cuban. No I’m not naming the countries that might end up playing in the World Cup. I’m roll calling the different types of food I just ate this past weekend – and I did this in no more than two hours.

How in the world!? you shockingly ask.

This is how: Easily, calmly and quite satisfied.

My little family, Briana (the wifey) and Mika (the little baby babe), went on an adventurous culinary tour of South Beach, Miami, Florida’s yummy food treasures. The fine folks at Miami Culinary Tours led us around South Beach to several top-rated culturally inspired restaurants. They showed us what Miami cuisine has to offer, briefed us on South Beach’s history and made our tummies happy with DELISH food!

Disclaimer: I am a Miami native. And our tour guide Cassie (who originally hails from Colorado) knows more to South Beach than I will ever know. I was schooled.

Ok. Truth be told. La Ventana restaurant was only the meeting point for the food tour. We can’t tell you how the food was, but we can say it did look good. 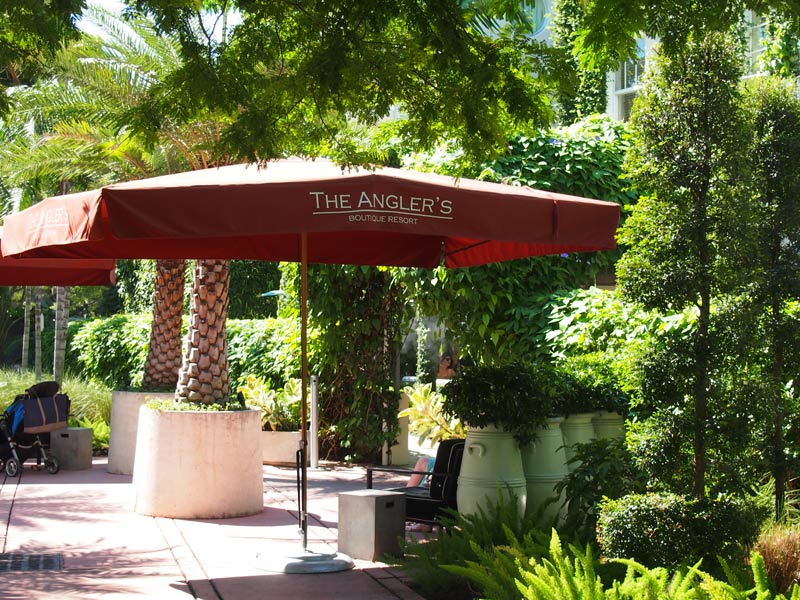 The Anglers Hotel was our first food stop.

We didn’t get to see the inside of the resort (which would’ve been nice), but we were greeted by two servers at the entrance with our first dish of the day. 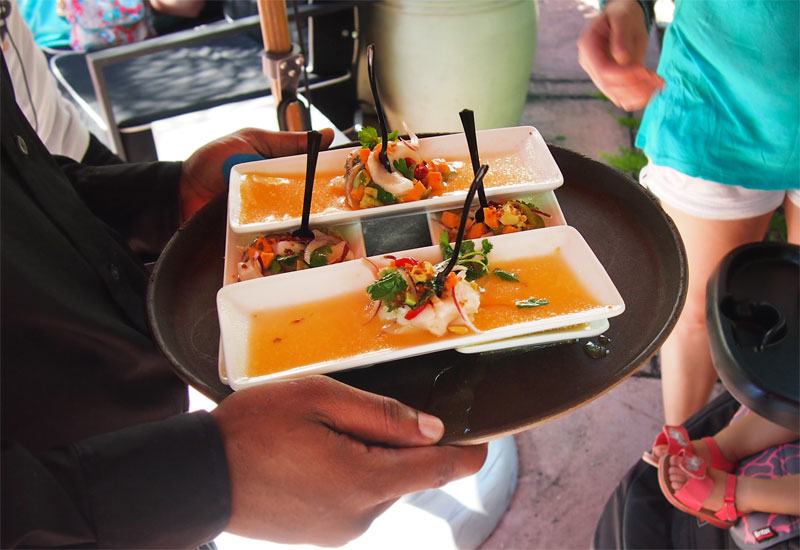 Cassie, our tour guide, explained to us how Colombian executive chef Carlos Torres changed the direction of the Angler’s Resort to a celebrated Latin cuisine, mainly incorporating seafood and local ingredients.

We got to sample a tangy, citric, yet fruity scallop tiradito. The scallops were handsomely featured in a pool of yummy citric juices that complemented the soft protein (don’t know which was the hero in this dish, both were a delight to munch on!). The only bad part was that we had to stand while eating; it would’ve been better if the food was placed in a bowl than a plate – one slight move and almost half of your juice would spill out! But I didn’t mind so much because I managed to steal Briana’s dish and clean that one off as well. 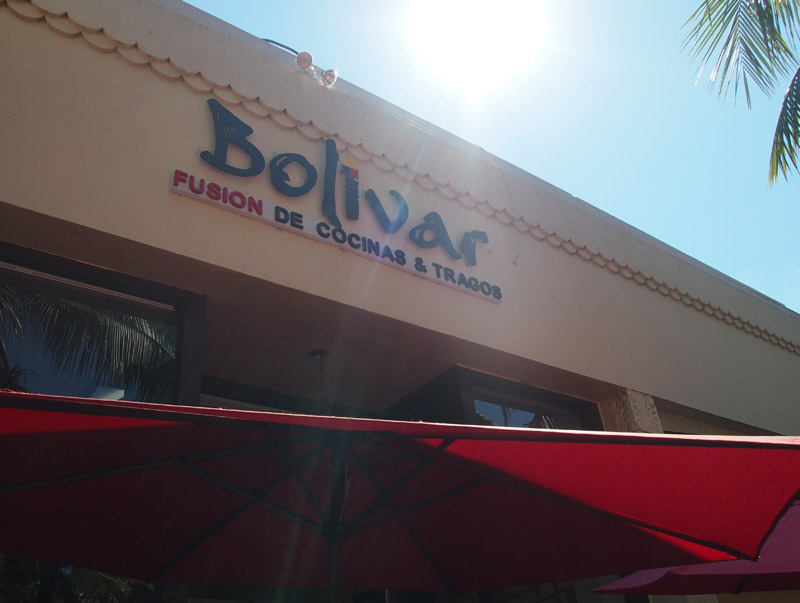 How does a South American fusion cuisine sound? Hold on, let me just tell you!

Growing up in Miami has accustomed me to traditional South American dishes, mainly patacones and empanadas. But here is where there’s a tasty twist. Bolivar Restaurant takes a little inspiration from Peru, Venezuela and Colombia, and combines them to come up with an addicting array of appetizers – which we got taste. 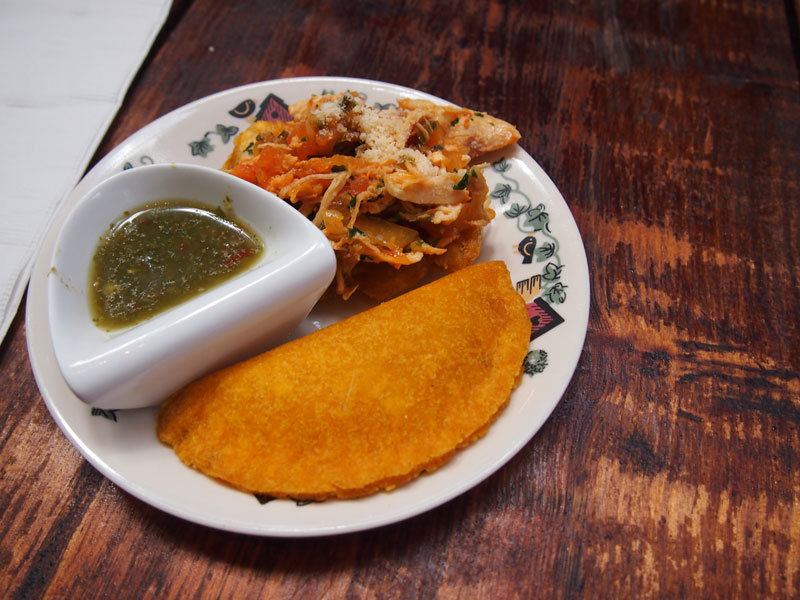 Before the food we were treated with Colombian Refajo – a popular drink in Colombia. It’s a refreshing, not overly sweet combo of, one of my favorites, beer, and Colombiana soda (tastes similar to cream soda). A yummy good morning drink. The recipe can also be adjusted for a bigger kick, with 3 shots of Aguardiente. 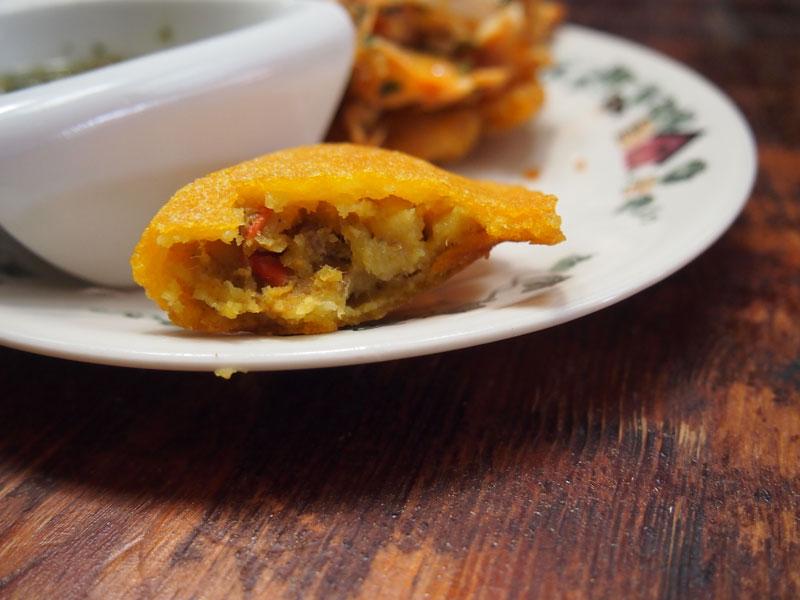 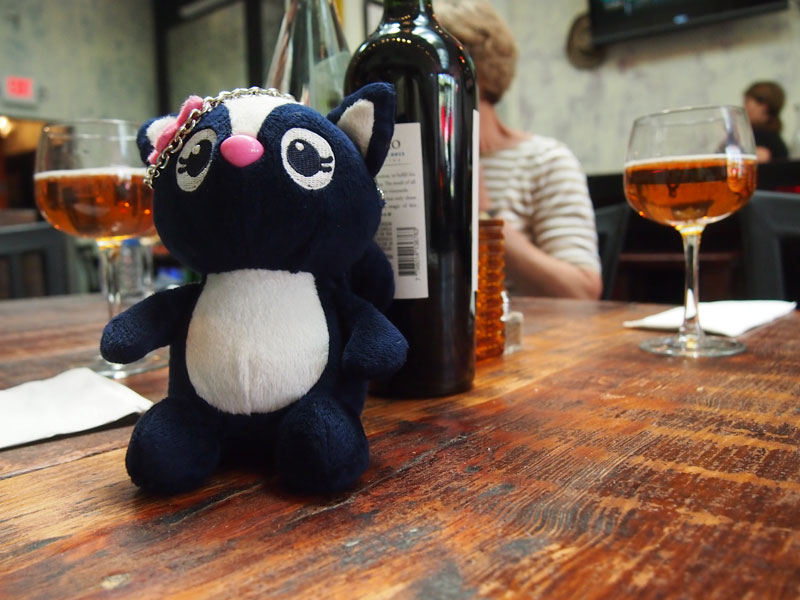 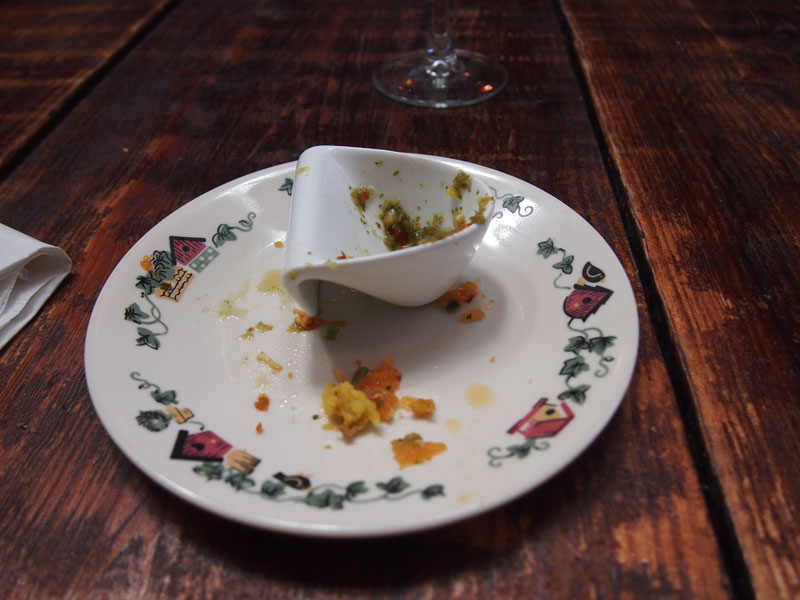 We each received a beef empanada and chicken patacon accompanied with aji sauce.

The Colombian empanada isn’t a typical dough-covered Latin American food-pocket that I’m accustomed too; this one was actually a fried, crunchy, corn-based outer covering, which I found to be better than the dough empanadas.

The chicken patacon was may favorite in this dish. The marriage of the succulent chicken, ahi sauce and patacon was savory with a good kick of heat – a great start to any meal!

I would’ve eaten the plates  – it was that good! 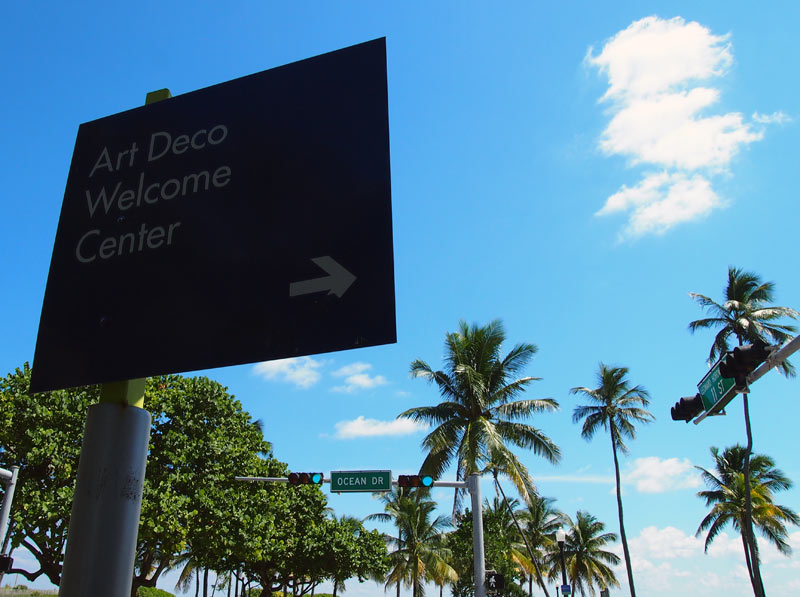 So as we walked to the next food stop, Cassie took us to a shady place on Ocean Drive and schooled us on South Beach’s architecture – Art Deco – and its different styles from various buildings on the strip. 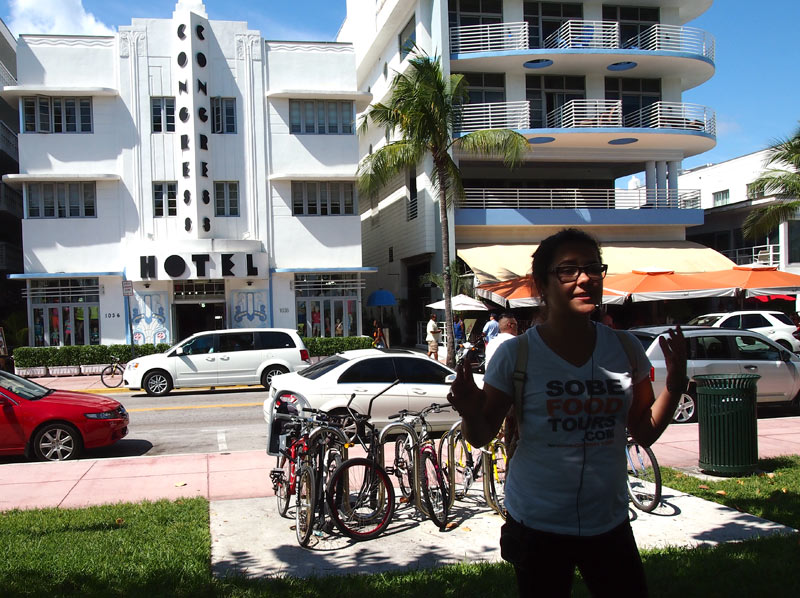 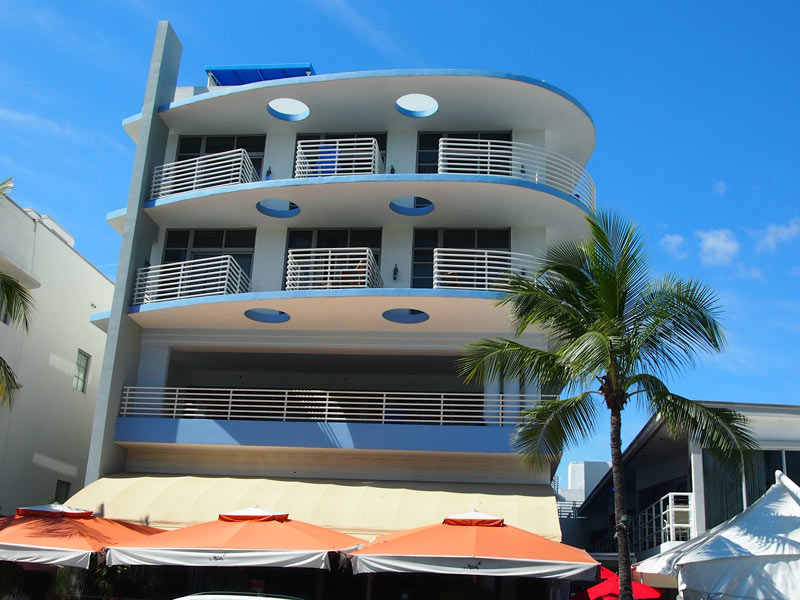 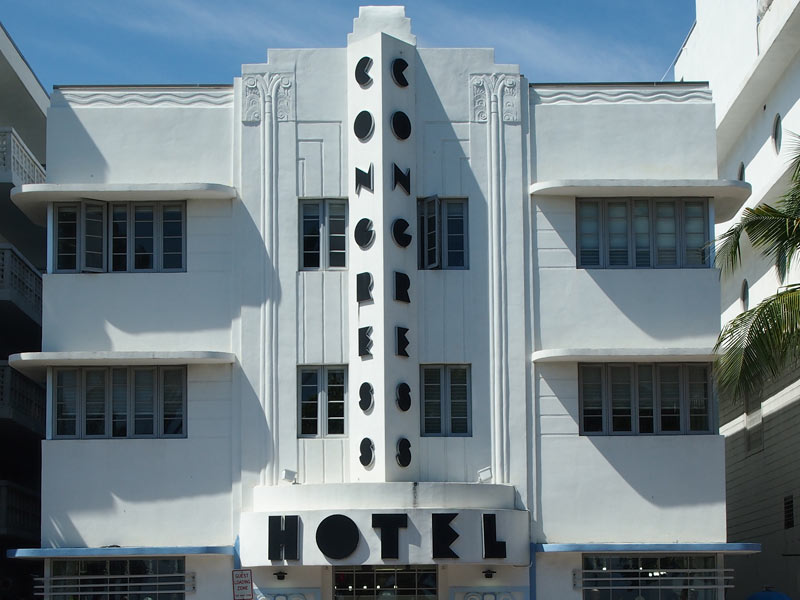 I’m sure you’ve noticed that I don’t have much to say about this part of the tour. That’s because I was still licking my fingers (yes, I know, it’s pretty gross), and couldn’t absorb all the amazing information that Cassie was telling us about each building’s style and designer.

I have to apologize again to my readers, but when I’ve just had yummy food and there’s more yummy food to gobble up, my brain shuts down and my stomach takes over.

There is no doubt that you’ll find a Cuban restaurant in Miami. But will you find one that you’ll be able to brag about. 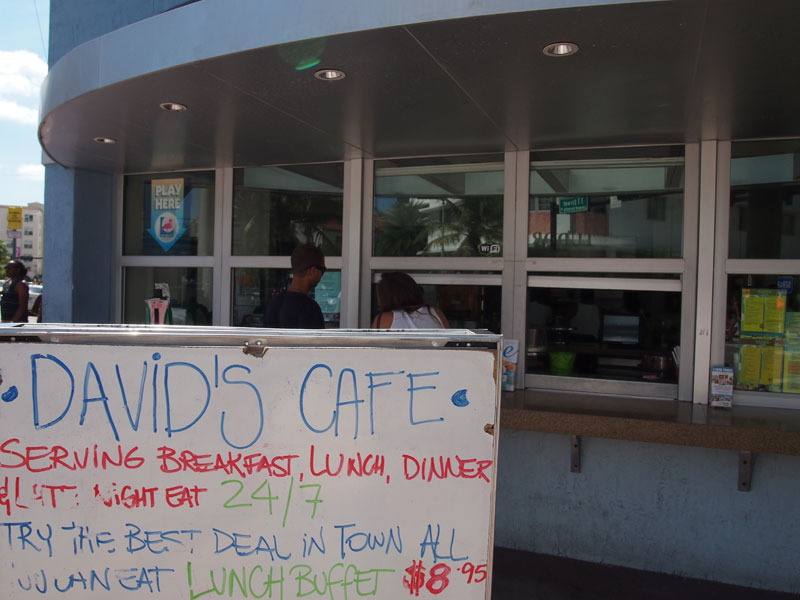 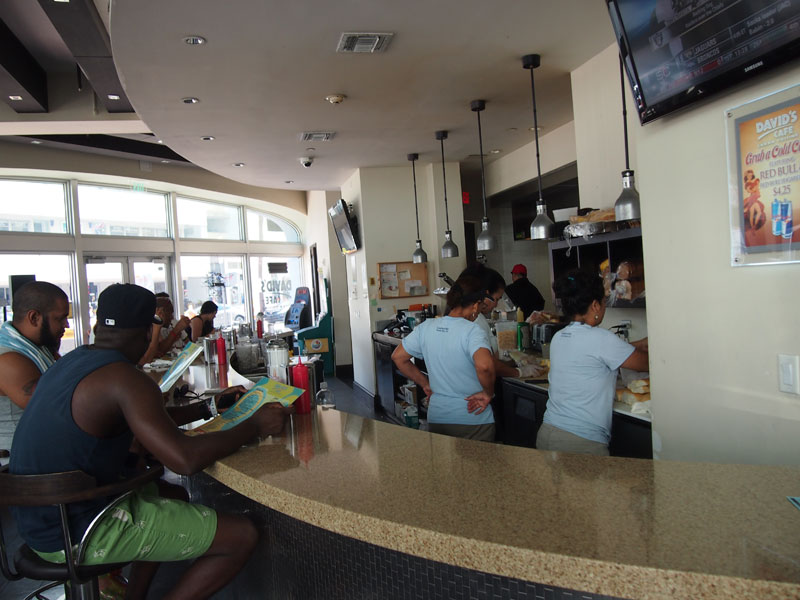 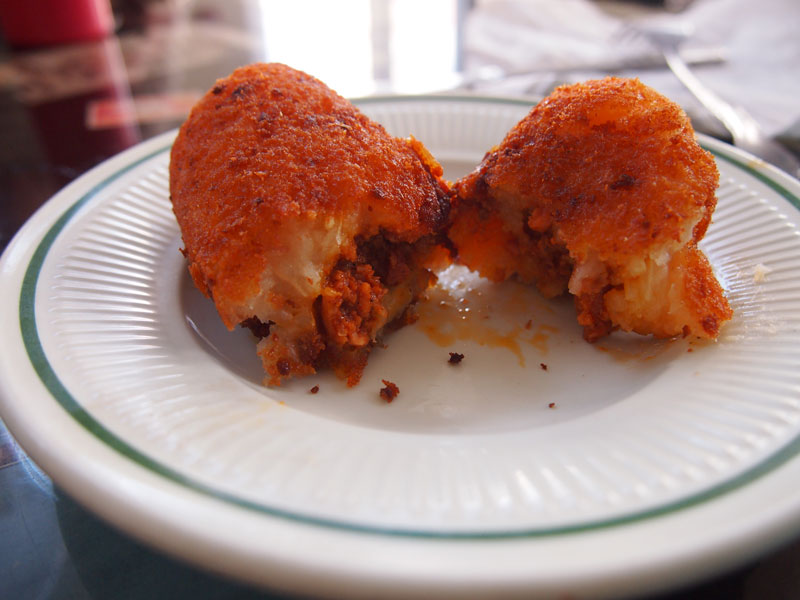 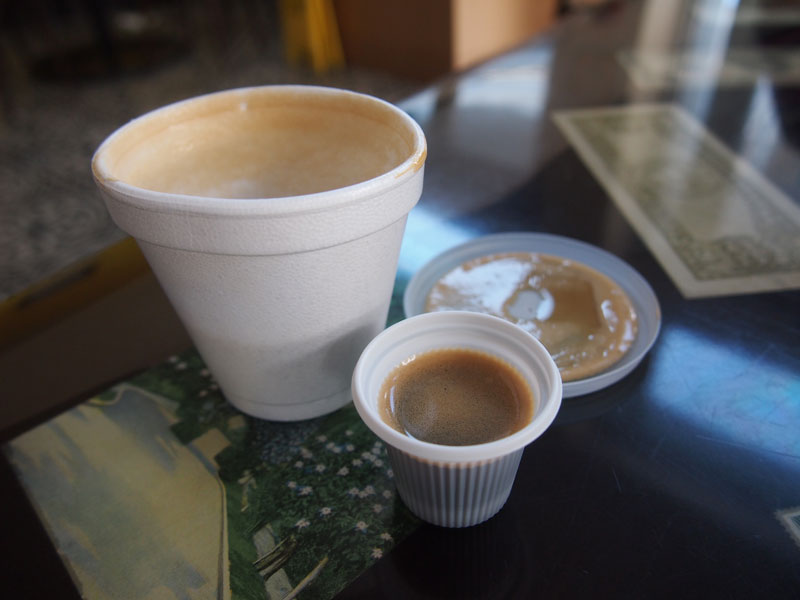 I believe there’s a common-law in Miami that if you visit the Magic City it’s obligatory for one to consume Cuban Coffee (Colada) – I can be wrong, but I doubt it!

The Miami food tour folks definitely knew about this law, and helped us obtain the necessary libation to keep us in check with the ‘Miami Must-Do Police!’

Warning: If you notice the little cup next to the coffee, this is the recommended amount of coffee one should ingest. Drinking larger amounts of Colada will most likely keep you up for days from Java overdose. Learn how to order coffee in Miami.

We also had a delicious Yuca Rellana, which is beef stuffed yuca that’s deep fried. I usually order the Papa Rellan (which is stuffed mashed potato) but this is the first time I tried the yuca alternative – a big thumbs up!

Cassie guided us around South Beach, visiting several other excellent restaurants. I’m not going to go into detail about the different foods we tried and places we visited, because frankly I’m too stuffed to talk about it.

But rest assure we weren’t disappointed. We couldn’t take another bite by the end of the tour, but then we saw GELATO!! Y.U.M. I’m positive that they imported the gelato direct from Italy – it was that yummy! Enjoy the eye-candy below. 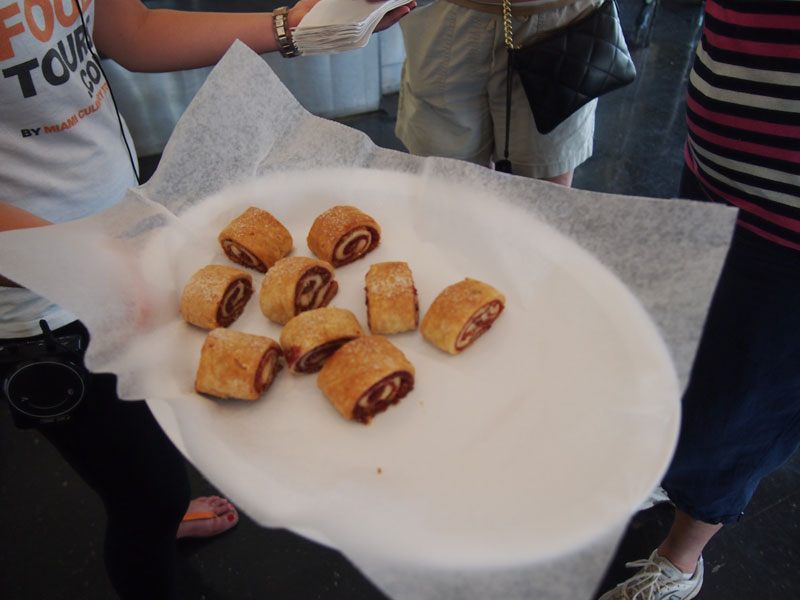 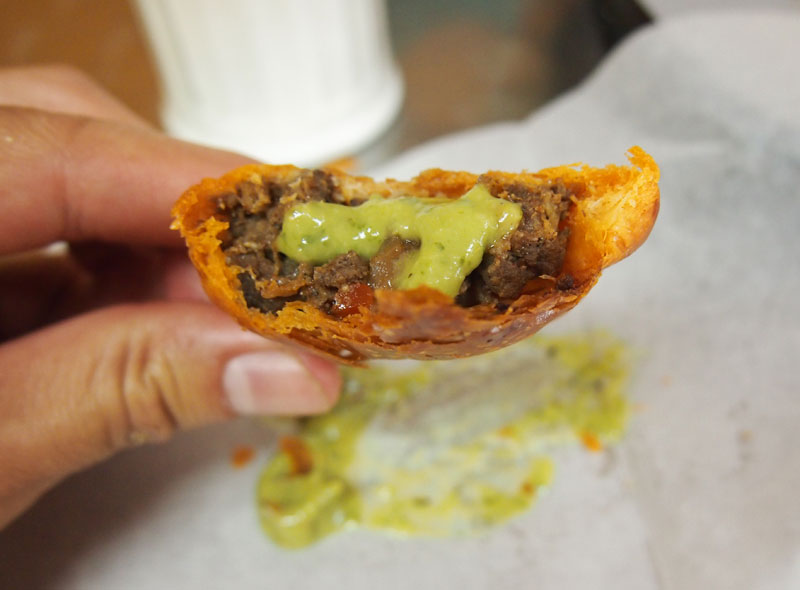 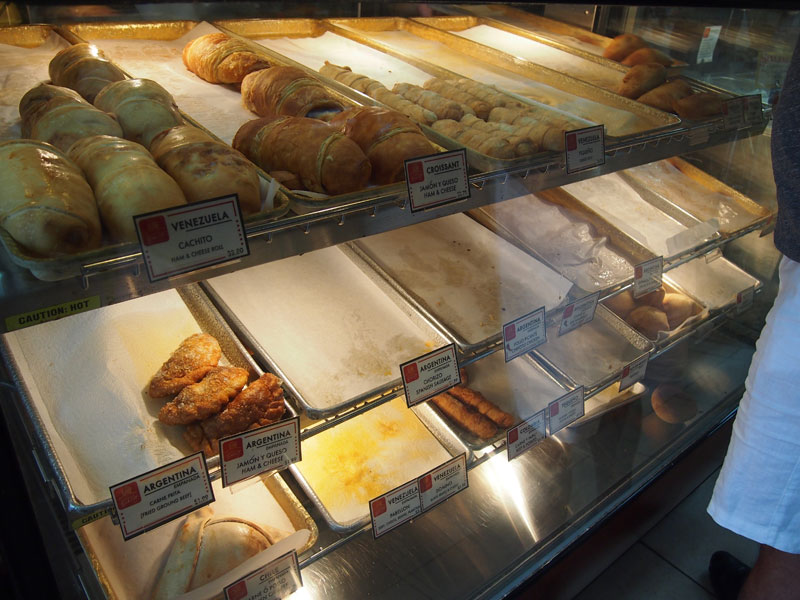 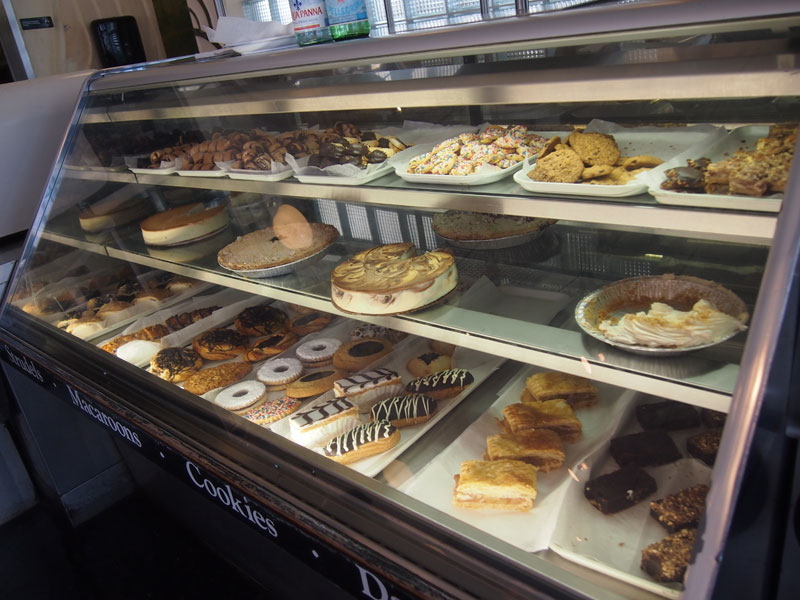 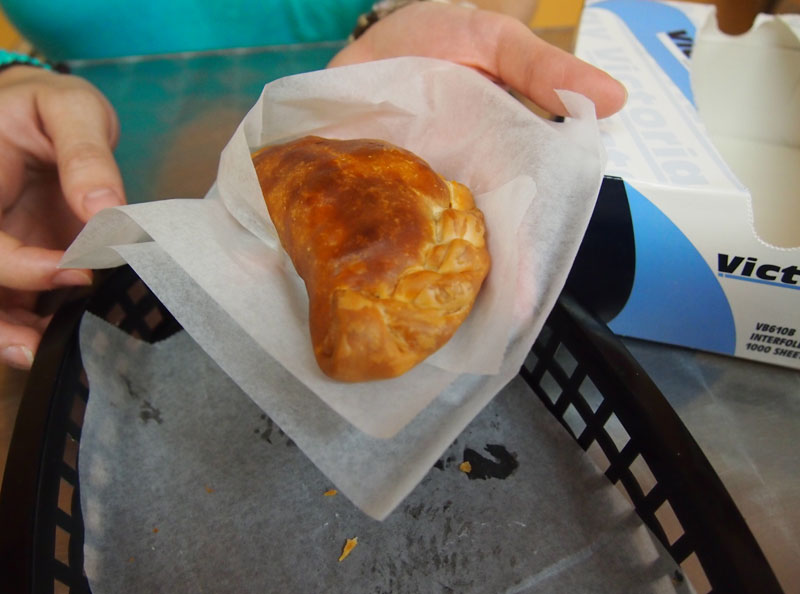 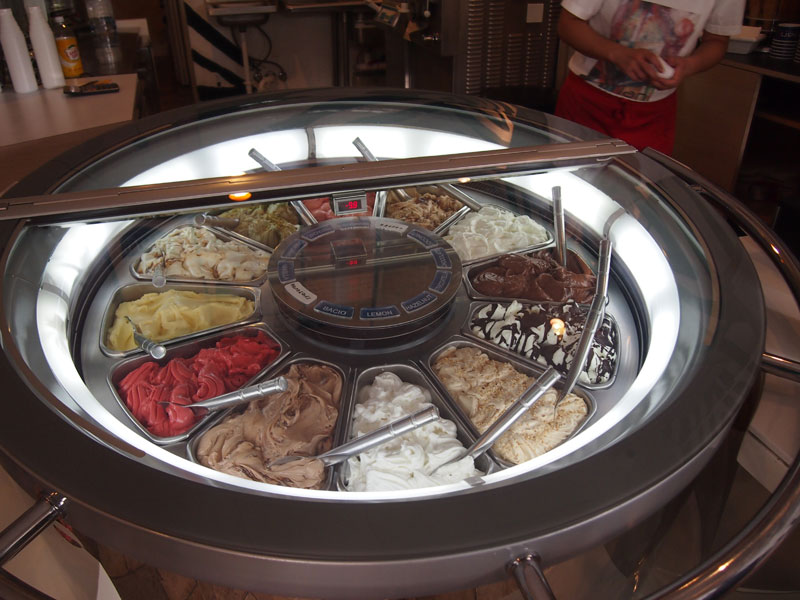 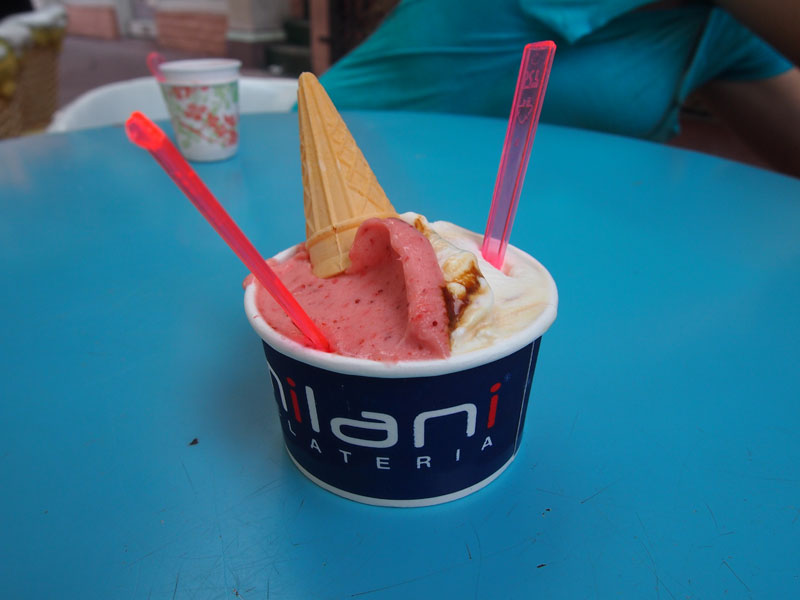 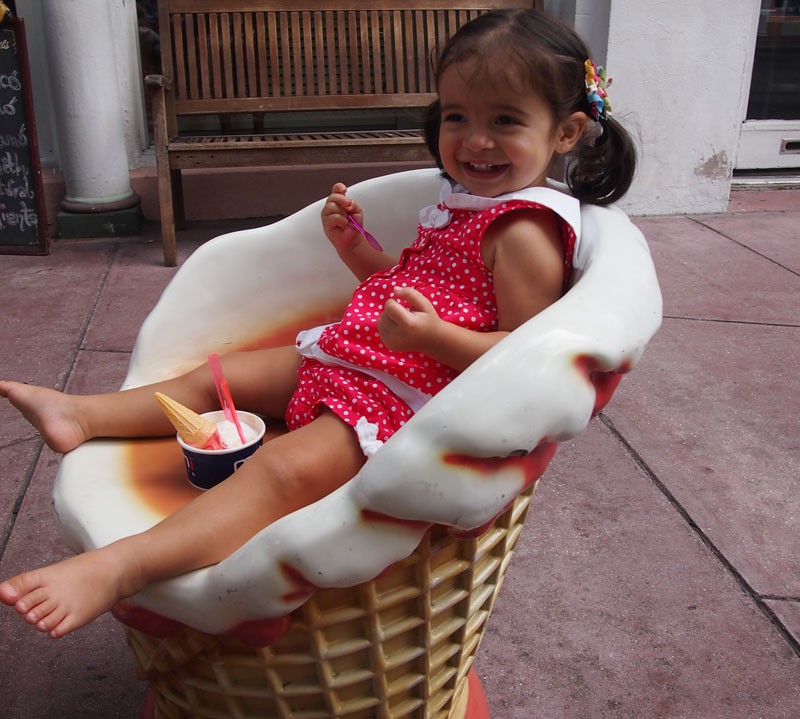 I for one am not a big fan of tours, never was, until now. I can say without a doubt these kind of Miami tours changed my mind.

I think I might be turning into a tour junky. Now that we have Mika in tow, tours like this one make visiting a city an all around family experience: you get to sample highly-rated restaurant’s dishes, and learn about the city you’re visiting, all without the stress and exhausting research when you do-it-yourself.

The Miami Culinary Tours also have food tours to visit hidden treasures in Miami’s Little Havana area. Next time you’re visiting Miami, or even if you’re a local, check out this food tour; it’ll open your eyes to how diverse and culturally-evolving Miami really is.

When lost in Miami ask a hooker for directions, Miami, Florida