Home Asia A Day Out in the Countryside with the Eagle Hunter, the Throat... 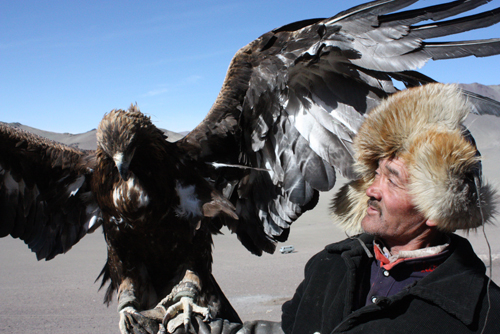 My aspirations to visit the Tuvan Republic in Russia had been dashed some weeks ago, when the iron gates were closed on any chance of a passage to the Russian Imperium. In Mongolia’s far western provincial capital of Ölgii, though, I met an unexpected windfall – a chance to visit a community of Tuvans within Mongolia. The Tuvans are famed throughout the music world for their prowess at the strange and uncanny art of throat singing (in Tuvan throat singing is called chöömej; in Mongolia, khöömi).

Many of these treacherous rocks just skirted the outside (or sometimes the inside) edge of a tire. I braced myself for that big impact that we somehow always managed to avoid.

This Mongolian Tuvan community lived in the partly Kazakh village of Tsengel. I had learned that the community included one senior throat singer, a man named Papisan, who had learned the art from his father. While he had always lived in Tsengel, Papisan had visited Tuva proper on many occasions to join in chöömej festivals.

Before we reached Tsengel, though, my guide Japar stopped at the hillside settlement of a Kazakh eagle hunter. The tradition of eagle hunting, which is also passed down from father to son, involves finding a baby eagle, ‘taming’ it, and training it to catch wild game. Once the eagles are full grown and fully trained, they are taken on winter hunting expeditions.

Immediately upon our appearance at his door the Eagle Hunter began assembling his eagle handing gear – a leather glove, a mask for the eagle, a winter hat. This humble herdsman we had greeted soon turned into an imperious Eagle Hunter, demanding money for photos, and making an uproar when I handed over an insufficient sum.

His bird was tied by one leg under an overhanging cliff, with a rock wall as its perch. When the Eagle Hunter began untying his bird, my guide Japar let drop the hint, ‘You can start taking pictures now.’ And yet I hesitated. The eagle hunter now had the eagle on his arm and was standing magnificently, gazing down at the mountain valley below. More forcibly now, Japar asked, ‘Are you going to take a picture now?’ I could hesitate no longer, and began the photo shoot.

Driving on past the realm of the Eagle Hunter, the bumpy desert drive had a narcotic effect on the senses. But the drowsiness was kept in check by the large rocks on the tracks. Many of these treacherous rocks just skirted the outside (or sometimes the inside) edge of a tire. I braced myself for that big impact that we somehow always managed to avoid. During the drive Japar informed me that Tsengel was the richest village in Ölgii province. When I asked why, he explained, ‘Because it’s near a forest.’

I would not be the first to ‘discover’ Papisan. A Swedish musicologist had been here before me (and there had been others too). The musicologist had even filmed a performance of Papisan and a troupe of Kazakh musicians near the river. This would have to be one of the more obscure music videos in existence.

When we arrived in Tsengel, we went directly to Papisan’s house. His wife was in, and served us with bowls of salty brown tea and bread. The living area of this wood cabin had various stringed instruments hanging from the walls. In a photo collage I spotted some pictures of the Dalai Lama. There was also a picture, pointed out by Japar, of Papisan standing in a field and playing the khomus (Tuvan style Jew’s harp). We also saw some evidence of his hobby of woodcarving.

Papisan’s wife said he had gone to the bank. Refreshed, we now began a search around the town. Sometimes Papisan taught throat singing and traditional Tuvan instruments at the elementary school, so we stopped there, but he was not in.

Finally Japar sighted Papisan in a neighbor’s yard. He was a man of medium height, with the fine moustache and line of beard that an old bluesman might wear. His rough face was formed of small fleshy parcels that turned to downward creases when he smiled – a bit reminiscent of the older Bukowski. His eyes had a wise quickness and knowing confidence. He had not had any work at the school this winter, he told Japar; they had not been able to pay his salary. So instead, he had done whatever odd work he could find.

Back at his house, Papisan asked what I had come for. No, I had not brought any recording equipment; I just wanted to hear a bit of throat singing. First he gave a demonstration of the khomus and the European Jew’s harp. As his music classes at the school had been foregone, his stringed instruments had not been handled much over the winter. His homemade igil, with its horse head and flame insignia locking the strings at the bottom, had a broken wooden nut at the top of the neck. He had loaned it out for a children’s performance and this was how it had been returned. Still, he played a song, accompanying his bow strokes with softly volcanic lung emittences of chöömej.

These sounds have a very physical effect upon the listener, like the chthonic incantations of a shamanist. Papisan had a way of shifting the sound from a primordial strain to the sound of a normal gruff singing voice. Then, like a ski jumper preparing to take flight, he launched upon a series of harmonic overtones, an airy Tuvan throat whistling like the call of some bird of prehistory.

…I tried a cup of fermented camel’s milk. It tasted like watery yogurt…

His morin khuur, a more ornate Mongolian version of the Tuvan igil, was in better condition, but the topshur he had on hand was a child’s model. He plucked out one last tune, then retired all the instruments to their cases and nails on the wall. I now showed him a chöömej compilation I had brought with me on portable mp3 player. The first song was by Gennadi Tumat, a group of singers whom he had met; one of the ensemble had died, he informed us. As he listened a stern tone of concentration came upon him; he was as if bracing himself and holding his breath, but exhaled deeply and nodded when it ended.

Outside Papisan’s front door was a section of wood with a few pieces of slate on top. Something had been burned on the slate. Looking closer, I saw the ashes had been bits of evergreen. Papisan leveled a sidelong glance at me and said, ‘Shamanism,’ making an offhand sign of the cross and a prayer gesture with his hands.

There would be one more stop that day. Japar’s three-year-old son had a lung problem, he told me. Western medicines had not helped, and so Japar had gone to see an old man who knew Mongolian traditional medicine. The old man concluded that the son needed camel milk.

We stopped at the only supplier of the milk around, at the far bounds of the small village of Ulaankhus. The milk was sold out of a Kazakh family homestead. I noticed what looked to be an animal head (of a black goat?) lodged on a pole top outside the house, but inside, all was friendly and consummately neat.

The white plaster walls were now drenched in light from the window. The patriarch and two old matrons were having a late lunch of potato noodles and horsemeat. While one of the old ladies filled up some empty plastic bottles for Japar, I tried a cup of fermented camel’s milk. It tasted like watery yogurt, and was one of the best milk products I had yet experienced.

Upon leaving, I asked the camel milk family if they wanted me to take a family portrait for them. This led to an enthusiastic suggestion by the patriarch that I get some shots of camel milking. The teenage daughter was sent to work on a huge brown beast with both humps deflated and fallen over. Meanwhile, a young boy was forced to hold the reigns of a skittish baby camel. The child fell into a state of terror as the camel whipped its head toward him and let out a camel scream. I worked feverishly to capture it all on camera.