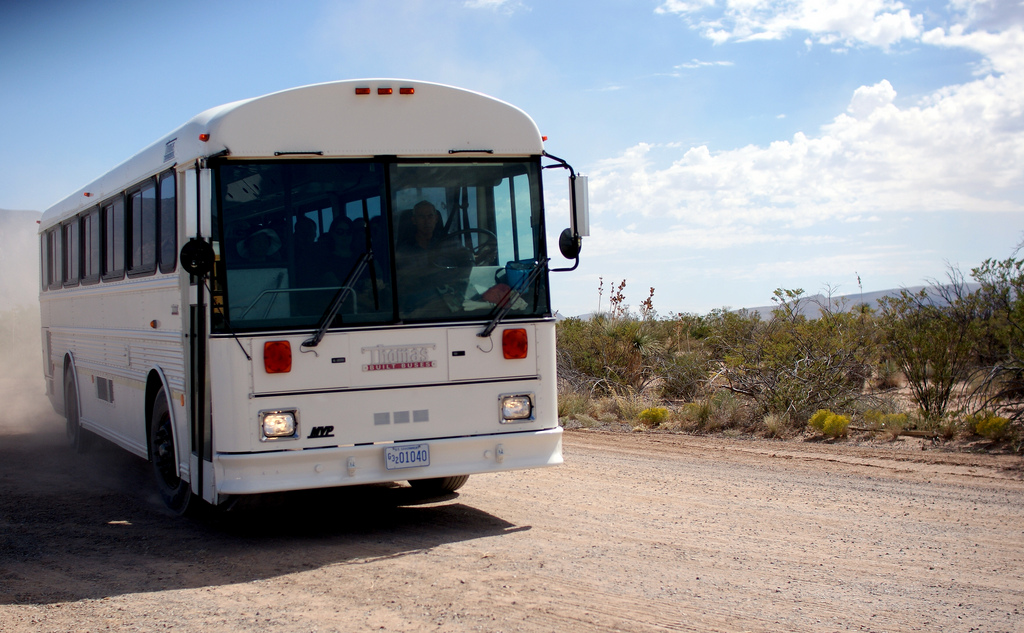 Looking to stay on budget while vacationing in Cancun, Mexico, we decided to go grocery shopping at the “mega-mart” downtown. I had heard some of the other tourists talking about their experiences with the local taxi cabs (overpriced and crazy driving), so we decided to take the bus downtown. How bad could it be? It was only six pesos and I don’t imagine that those big lumbering buses could move all that fast down the strip. So, with the taxi cabs lined up outside our resort and the drivers all trying to coax us in like carnival barkers, we climbed aboard the public bus and paid our six pesos.

“The woman behind the counter sent me on my way with my mystery meat as the giggling reached a fevered pitch.”

[blockquote1]We made our way back down the street while a man stood in the aisle playing his guitar at the same fevered pace as the bus moved.[/blockquote1]

Before I could even take my seat, I was thrust towards the back of the bus as it took off from the bus stop. Now I know how the astronauts feel during take-off. As I was thrown backwards past my wife’s seat, I noticed that her face had already gone completely white. I quickly grabbed on to a seat as I flew by and held on for dear life just in time to hear the brakes squeal and lock up at the next bus stop. Why was this guy in such a big hurry? Was he late for his afternoon siesta? I later found out that the bus drivers get paid according to how many passengers they get on their bus during their shift. After several more stops and with my hands cramped up from clutching the sides of my seat, I got off the bus at a stop across the street from the store.

Upon entering the store, I found all the usual chips and drinks that I was accustomed to back home but quickly realized that this was one of those stores where you had to bring your own bags for your groceries. No big deal. I’ll just buy some bags. After rounding the store without any success, I decided to find a clerk to ask as to the location of the bags. “No hablo ingles, Senor” the clerk said to me. Then it hit me. I looked around and sure enough. We were the only Caucasians in the store. Surely, I thought, that in a tourist town like Cancun there has to be some English speaking clerks somewhere in the store. He took me to another young man. “No hablo ingles, Senor” the next clerk said to me. By the time I was taken to the fourth clerk, I thought that maybe I had better help out a little more so I proceeded to pretend to put groceries in a bag hoping he would get the idea. I must have looked ridiculous playing charades in the middle of the store with these young men standing around me. “Oh, bolsa!” he shouted. He took us to the back of the store where we found a whole aisle filled with different types of bags. Mission accomplished.

The deli counter was next. I wheeled our cart up to the big glass case and stood among the dozen or so Mexican women who were waiting for their turn. As I waited, I eyed up the lunch meat trying to determine which one had probably not been called “Fido” the day before. When the woman behind the counter pointed at me, I pointed at a stack of meat which resembled ham and said in my best Spanish accent, “Dos kilos pour favor.” All of the women started to giggle. I thought that I had just ordered two kilograms of ham but considering their reactions, I wasn’t feeling real confidant in my elementary Spanish-speaking skills. The woman asked me, “Dos kilos?” I thought that maybe if I spoke in a more assertive tone, I wouldn’t be laughed at this time. So in my most confidant sounding voice I said, “Se, dos kilos pour favor.” The giggling ensued again. The woman behind the counter sent me on my way with my mystery meat as the giggling reached a fevered pitch. After that, I was a little afraid to eat the meat but it ended up tasting like ham.

The next thing we came to was 10 gallon vats filled with olives and pickles. My sister’s saliva glands started working in overdrive at the thought of those olives. Only one problem. There was only one scoop spoon for all three vats and it was sitting in the pickles. Was this spoon supposed to be used in all three vats? I didn’t think that the locals would take too kindly to us sticking our whole arm in the olive vat. Well, she wasn’t about to let a little detail like that keep her from her beloved olives so she fished the spoon out of the pickles and went for some olives. OK, problem number two. There was nothing to put the olives in and I wasn’t about to try to ask someone where I could get a container (see bag story above). We found some small plastic bags across the aisle with the vegetables and proceeded to spoon our olives into the bag. I was feeling pretty good at that point. There didn’t seem to be any obstacle that we couldn’t overcome, even in a foreign country.

We made our way up to the checkout lines and starting putting our food on the conveyor belt. When the clerk got the bag of olives, she held them up to her face staring at them as if she wasn’t quite sure what to do with them. She said something to us in Spanish a couple of times but not understanding her, we finally just shrugged our shoulders. She laid the olives off to the side while she finished checking out the rest of our groceries. “Maybe she needs to get a price check,” I thought to myself. We bagged up our groceries and she showed us the price on the register screen. That’s when I noticed them. The olives were still laying there. Oh, our precious olives! The clerk pointed at the register again. I guess there will be no olives for us today. Thump! I heard my sister’s heart hit the floor. We paid the clerk for the rest of the food and left the store without saying another word.

Now it was time to get back on the public transportation death machine and make our way back to our condo. By the time we got back to the bus stop, the streets were getting quite busy and I was starting to wonder how we would get all this food back with the buses being so full. But when the next bus stopped, a wave of people engulfed us and we were pushed up into the bus. I opted to stand in the rear stairwell as there was a steel pole that looked sturdy enough to hang on to. The bus was getting so full now that nobody even seemed to notice the two boys who were sitting on top of the dashboard in the bus’ front window. We made our way back down the street while a man stood in the aisle playing his guitar at the same fevered pace as the bus moved. I’ll never know how he kept his feet as the bus slammed to a halt at each stop.

I saw our resort coming up fast as we continued to careen down the street almost out of control. I pulled the cord and the bus screeched to a halt. We quickly jumped off the bus just in time to see it tear off down the street again frantic to fill the empty spaces we had left. Boy, were we glad to be back!

So, the next time I’m in Mexico will I resort to the chauffer-driven minivans from the resort and only eat at the restaurants? Not on your life! This was one of the greatest adventures I had during my stay. The chance to travel and shop with the Mexican people is an experience that no amount of sandy beaches or pina coladas could ever replace it from my memories. The chance to live la vida local. 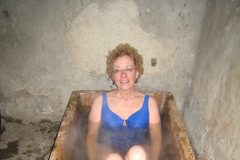 Trekking Bhutan, A Dream Rekindled at 62