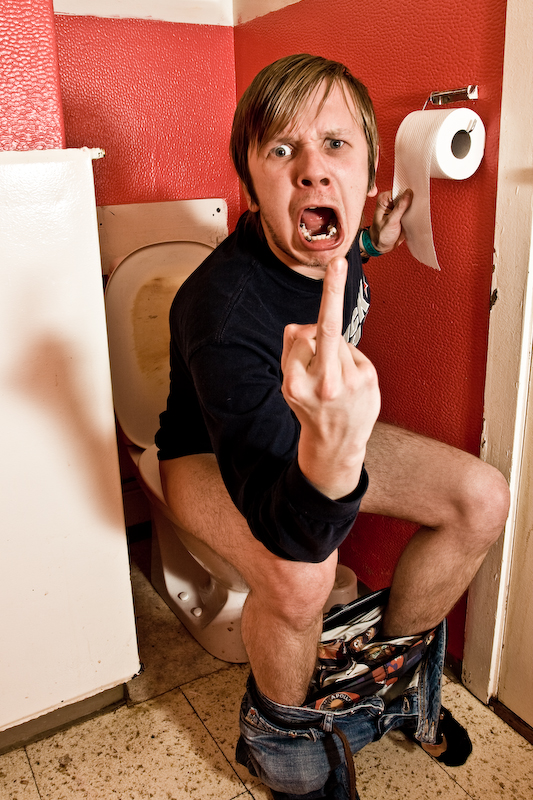 Perhaps it was the stress of living in a different culture finally getting to me or maybe the culprit was the daily school lunch with its konyaku and bottomless bowls of rice. Whatever the cause, about thirteen months into my JET experience my gut decided that it was in revolt. No, revolt is an inaccurate description because my digestive system didn’t actually do anything- it stopped doing everything. Yes, everything would go in just fine: soba, sashimi, katsu kare, udon and all my other favorite Japanese fair; but nothing was coming out!

Now, if you have been fortunate enough to have never experienced this particular bodily dysfunction, let me tell you that it is no fun at all. Imagine that really full feeling after you ate too much at the holiday dinner never going away. Imagine sitting down to a full school lunch not having the least desire to eat anything while the teacher and students stare and start asking you in Japanese what is wrong – “Don’t you like Japanese food?” – making you feel compelled to try to force it down – further compounding the problem.

I remember one particularly bad day. I had gone to the local pharmacy and after unsuccessfully attempting to decode the kanji on the boxes of medication, walked out not with a laxative but something I found out later to be more akin to an anti-diarrheal…yes, a medication to help with the exact opposite problem I was experiencing. Ouch! I stayed up most of that night in misery wondering which was more uncomfortable, the physical sensation of being extremely bloated with no sign of relief or the idea of what was slowly building up inside me…

Well, after about eight weeks of this, the average person would have probably already visited the doctor to see what the heck was going on but having never been exposed to the Japanese healthcare system, you can imagine I was a bit hesitant about trying to explain this particular problem with my limited Japanese skills. Luckily my supervisor speaks English and was able to recommend me to a nearby gastroenterologist who he claimed knew a fair amount of English (after more than a year in the Japanese English education system, I was highly suspicious of this claim). So after a particularly bad bout of…well let’s just say it…constipation, three months into the onset of the condition, I finally did a walk-in appearance at Dr. Kosei’s Clinic.

It was around 5:00 in the afternoon in late fall. I had biked straight to the clinic from school. As I passed through familiar rice fields and a mixture of Japanese and western-styled houses, I felt a combination of anticipation of possible relief and the dread of trying to explain my symptoms. By the time I reached the clinic, the dread had taken the lead. “Ganbatte,” I told myself as I went inside to see if I had integrated that mysterious Japanese attitude of acceptance to any situation – shoganai ne.

The clinic’s lobby was small with modern decoration and I was comforted by that ubiquitous object that is sprinkled over the Japanese isles like furikake is sprinkled on bowls of rice, the vending machine. After buying a bottle of water, I introduced myself to the receptionist as best I could and was asked to take a seat and given a thermometer. As I raised it to put it under my tongue, I was lucky to catch the sight of an old man who was waiting for his appointment. He shook his head at me and pointed to my armpit. I smiled and shrugged. “Whew,” I thought to myself. Another faux-pax averted.

After my temperature was read, I was given a diagram of the human body and told to mark the area that was bothering me and give an explanation. This is when I started to lose my nerve. Embarrassing health problems are tough enough to deal with, but I was a foreigner in Japan who was barely conversant. How do I explain this without the proper vocabulary? Gesturing seemed a bit too crude in this particular situation.

No sooner had I marked by lower abdomen than my name was called. “Gordon-san…Gordon-san,” the nurse called, scanning the room as if there was any question who she was calling. I reluctantly gathered my courage telling myself that I had to do this – I couldn’t stand the discomfort anymore.

I was then taken to the next waiting area. “See…things aren’t so different from back home,” I reassured myself. Not 3 seconds after that thought entered my head, the door opened to the examination room and I was motioned in.

“Thank GOD! He does speak English, I internally exclaimed. “Nice to meet you too,” I said while enthusiastically shaking his hand.

It was a short visit. I told him my problem and he suggested I get a blood test and eat some more fiber. If only it was that easy. The problem persisted and eventually worsened. Dr. Kosei and I had many similar visits – he would ask what was wrong. I would say the same problem. He would then show me the chart that I began to refer to as the “poopscale” on which I would have to distinguish which one was closest to mine. Afterwards, he would suggest another treatment course. A CT-scan and many powdered laxative prescriptions later, it was decided that I should get a full-colonoscopy.

“A colonoscopy? You mean…the camera…up there?”

Next, he demonstrated with the camera and a disturbing plastic model and showed me some images on the computer of other patients’ colons as if it were the most normal thing in the world to look at. Yuck…but I decided it was worth it if it fixed this very uncomfortable and frustrating problem. “Ok, let’s do it.”

Those of you who have gone through this procedure will probably agree with me that it isn’t a pleasant experience. First, there is the fasting. Then, there are the nauseating elixirs of powder and lemony, chemical tasting liquid you have to imbibe. Then comes the really fun part — the evacuation — every 20-30 minutes for several hours.

After a sleepless night involving frequent trips to the toilet, I arose feeling drained and unusually empty to drive to the clinic. Upon checking in, the cheerful nurse who knew me by now asked me to wait in the “colonoscopy” waiting area where I forced down another vile mixture while sitting across from an old Japanese man who I assumed was having the same procedure. The nurse came to explain how when we “went,” to call her to check each time before flushing to see how “ready” we were. Yuck! No turning back now I suppose.

The old man and I looked across at each other as we both drank the vile liquid and I began to feel a very strong sense of familiarity with this man. Though we spoke no words, it was clear that at that moment there was no Japanese or American but only our shared human frailty. We both didn’t want to be there drinking that yellowy broth but we both understood it was for the greater good and as we groaned and gurgled our way repeatedly from the chair to the bathroom, I felt something you rarely feel as a foreigner in Japan – connected.

After another 3 hours of purging, it was finally time. I put on some special pajamas with the hole in the back and nervously awaited the doctor. Dr. Kosei was reassuring as usual. “You won’t feel a thing,” he said as I laid on the table.

He was right. Aside from the prick of the IV needle and a cold wet sensation, I don’t remember much of anything. It turns out that other than my colon being “very, very, very long” I was perfectly healthy. That was both a relief and a disappointment. On the one hand, I was happy not to have cancer or something serious but I still had to deal with an uncomfortable condition now diagnosed as Irritable Bowel Syndrome. I thanked Dr. Kosei for his help and said I would be back if needed for more powdered relief but I never returned.

My condition didn’t lessen much until I returned home. I attribute it to stress, to being relieved to be back home where I could be do the things everyone takes for granted – read menus, communicate, understand cultural cues, etc. In any case, I slowly seem to be returning to normal as Japan fades into the background and I have to get on with the demands of life at present. Without a doubt, I had many more positive and inspiring experiences in my two years in the JET program but somehow it is a part of our shared human nature that the challenges always seem the more memorable.