Home Asia Searching on Your Own for Geishas in Kyoto, Japan 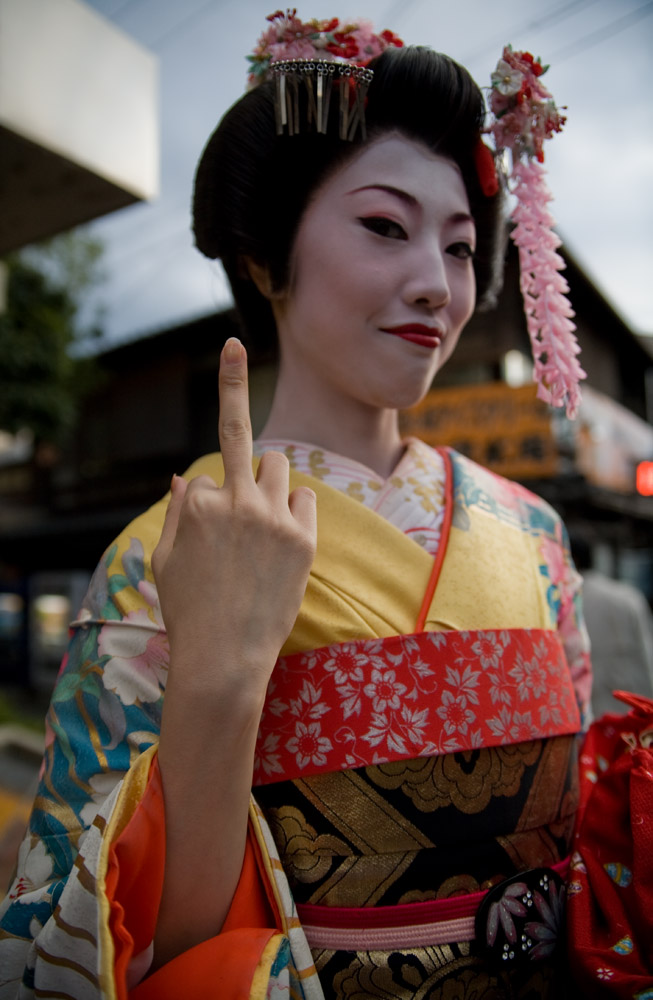 Is it possible to get a glimpse of the elite and secret world of the geishas, one of many famous traditional symbols of Japan that tourists from all over the world, as well as the Japanese, want to see for themselves? Yes, there is an easier way to search on your own for these elusive celebrities of Japan, and it won’t cost you any money. Alternatively, you could find guides who will take you on walking tours for 3,000 Yen ($30 – $40) where you encounter one or two geishas, or you could spend an evening being entertained in a teahouse, which is extremely expensive, because geishas are affordable only to the rich and famous.

But how then does the average foreign tourist or Japanese national get to see geishas on their own for free? It’s as easy as asking the right people. For me I was living in Japan several years ago as an Assistant Language Teacher teaching English at two public high schools. A lady I knew from my neighborhood, whose dry cleaning store I patronized, introduced me to her son who was visiting. He spoke excellent English and acted as a translator. I was then invited for dinner one evening. As we dined on his mother’s superb cooking of teriyaki and other popular Japanese entrees that Westerners, or gaijins, such as myself, enjoy so much Koba-san or Koba, her son, asked what places I was interested in seeing in Japan. I stated I was very interested in visiting Kyoto and seeing the geishas.

Coincidentally he had graduated from the University of Kyoto, the equivalent of an Ivy League university in Japan, so he knew the city very well. I was then invited to spend the weekend with his family who lived outside the city limits of Kyoto. This was a dream come true for me. I would get to see the ancient capital of Japan, the home of geishas.

The time we went to Kyoto was at the height of autumn. The foliage from the maple trees was in dramatic shades of exquisite red, yellow, and gold. Autumn is another popular time of year to go to Kyoto, besides springtime with magnificent cherry blossoms in full bloom everywhere. The geishas live and work in what is known as the Gion District. The traditional teahouses with their drapery signs, sliding doors, and paper lanterns hanging outside adorn this area everywhere you go. The teahouses are the geishas’ stage.

As we arrived in Gion, Koba started conversing with a number of shopkeepers, residents, and business owners as to where we could find geishas. We proceeded to walk for what seemed like blocks on end to a very quiet and non-descript section that was tucked away from the hustle and bustle of intensely crowded businesses, traffic, and noise stemming from the touristy Gion District. From what I gathered it seemed to be a residential area. Koba told me this is where the geishas live.

We were to return back to this neighborhood later in the afternoon as some of them would be out for a photo session. I could hardly wait. When the time, arrived we walked further down to a very lovely spot of beautiful weeping willow trees, orange painted picket fences with writings in Japanese, and pedestrian-only cobblestone streets. As we went further, there was a tori, the recognizable entrance into a Shinto shrine. In front of this particular Shinto shrine were maiko-sans or apprentice geishas. I was ecstatic seeing the maiko-sans in their brightly colored kimonos, white pan make-up, hair ornaments, and long hanging obis or sashes. My camera constantly clicked away as they were preparing themselves for an upcoming photo shoot. We had some time to take their photos, talk to them, and to just observe.

Koba then began chatting with them when there were four standing in front of the shrine. He asked if I could stand in the middle as he would take our photo. They seemed pleased to be posing with a foreigner. As far as I could tell, we were the only sight seekers around. This made me feel very privileged. After our own photo session with the maiko-sans was over, sadly enough it was time for us to leave, because they had to get ready for other commitments.

Later that evening before we left Kyoto, Koba said he heard from the maiko-sans a very famous geisha would be enroute to a certain teahouse as she was worth waiting to see. Maiko-sans are more readily available to the general public, whereas geishas are as evasive as camera shy movie stars. After we waited for at least 30-45 minutes with a lot of other Japanese and foreign tourists, besides myself, I heard a lot of commotion going on behind me. I had my camera ready and before I knew it there walked right beside me, at such a record pace, this breath-taking geisha in a stunning black kimono with gold and red designs. Luckily I snapped a picture perfect photo of her from behind. There was an air of maturity, regal beauty, and grace about her the maiko-sans I met earlier had not yet perfected, but would in time. This was the end of a perfect outing in seeing geishas.

All it takes, if you are willing, is a bit of due diligence, persistence, asking a number of people, and sheer determination to search on your own for geishas and save money too. I am extremely grateful to my wonderful friend, Koba-san, for a memorable day in the Gion District in Kyoto to see the geishas in their own environment.

Why Camping is Quickly Making a Comeback