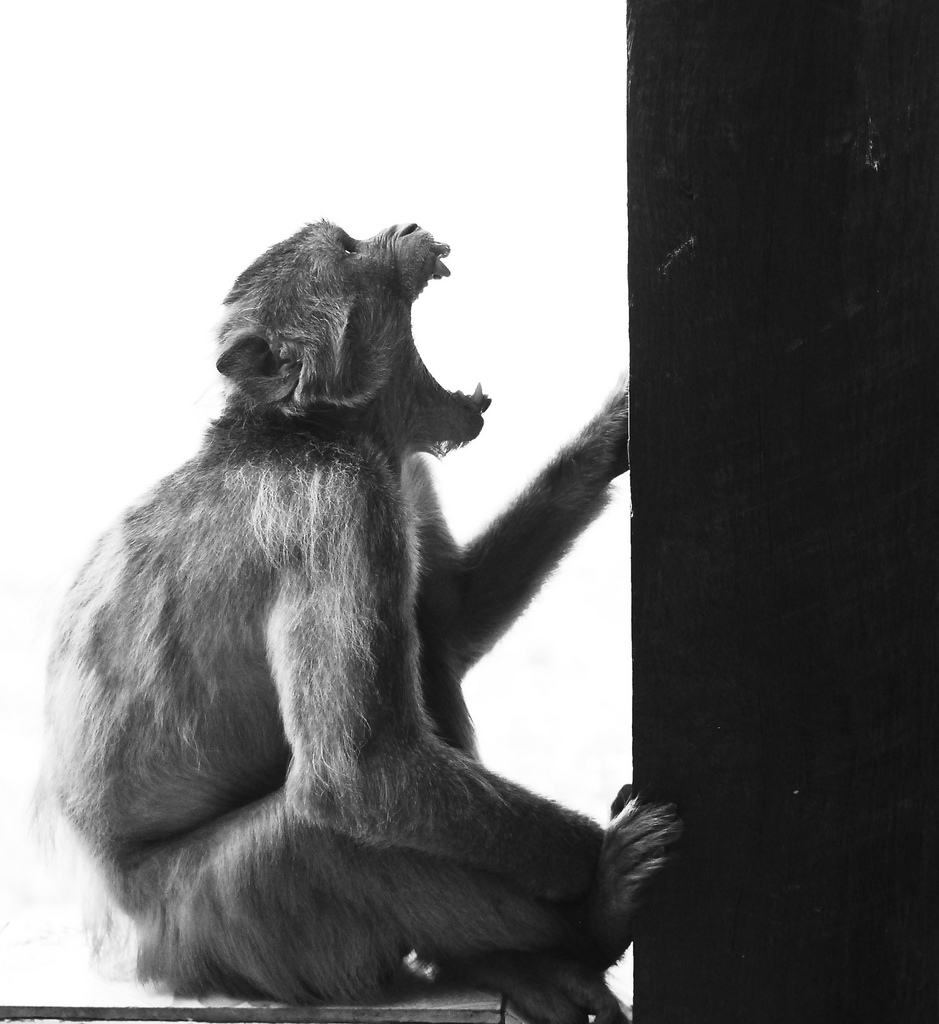 I used to work as consultant for a former employer’s Asia Pacific office. I was an American, living in Sydney, traveling to such exotic places as Hong Kong and Singapore for work. Admittedly, I took the job as chance to have someone else pay for me seeing the region. As fortune would have it, I was working with several like-minded people who would often travel with me. Often we would take side trips after business was done.

[quote]…a monkey slowly approached me and my idling bike…I tried to start a casual conversation with him to lighten the mood. No luck, but I did learn what the monkey was after.[/quote]

On one occasion, three of us found ourselves in Bangkok for a couple weeks of work and towards the end of the project we decided to do some sightseeing instead of heading back to Sydney immediately. Between the three of us we had pretty much covered Thailand, so we agreed upon a three day trip to Siam Reap in Cambodia to see Angkor Wat.

After the congestion of Bangkok, Siam Reap was a delight. It was before the resorts were built, so the town still had a nice, laid back feel. Walking along the roads, and standing out like westerners did, we had no shortage of drivers pulling off the side of the road and offering to take us on an air-conditioned guided tour of the temples. There were other interesting solicitations as well, but that’s not the point of this story. Instead of seeing the temples in “air-conditioned comfort”, each day we rented scooters as it seemed more adventurous.

The guy who rented us the scooters was a jolly local who took our passports for security as a condition of the daily rental. He provided us each with a 10 pound chain and lock; whenever we left our cycles to explore a temple we were to lock up them since stealing bikes was a profitable business. With my passport in jeopardy I was always sure to use the lock and chain provided. The cycles even came with a basket in front of the handlebars as a place to store our chains when we were riding around.

Each day it approached 100 degrees, so knowing I had to keep hydrated, I always traveled with a two liter bottle of water. I stored that bottle in the basket, weighing it down with the 10 pound chain so it wouldn’t bounce out as I went speeding through the dirt roads that connected the temples.

It was great, ripping down the roads, racing my friends, checking out the temples, seeing the locals, and occasionally spotting monkeys. The monkeys were usually off in the distance, in the trees or on a remote part of a temple wall. That was fine with me. I had read enough about monkeys to know it’s best to see them from afar; they were territorial, had claws, and carried diseases,

One day as we were riding along, I pulled over and to apply some sunscreen as my face was feeling a bit warm. I let my friends go on ahead knowing I would catch up with them on the road or at the next temple. As I sat on my bike applying the sunscreen, a monkey slowly approached me and my idling bike. I wasn’t sure what to do, but he seemed fairly friendly, a little timid and rather thin. He came over and squatted near the front tire of my bike. Still applying sunscreen, I tried to start a casual conversation with him to lighten the mood. No luck, but I did learn what the monkey was after.

The monkey just stared at me for a while and slowly started to stretch out towards the bike’s basket. The heat must have been getting to the monkey as well, and he, thirsty, recognized what the bottle contained. He slowly reached up to towards the bottle, keeping his eyes on me to see if I would try and stop him. Knowing the bottle was securely weighted down by the chain, I let him try and grab it. It wasn’t like I felt confident enough to shoo him off anyway.

“Go ahead, monkey.” I said to him. “You won’t be able to get it.” That advice was my only attempt to discourage him in any way.

The monkey didn’t listen to me, but instead grabbed the top of the bottle that was sticking out of the basket. He tried in vain to pull it out for a while, but the chain held it tight. Frustrated, he gave up and stared at me.

“I told you that you wouldn’t be able to get it!” I said.

Apparently the monkey didn’t like my “I-told-you-so” attitude and bared his teeth at me. At the time, my limited knowledge of monkeys didn’t contain the fact that baring teeth was a sign of aggression and a threat. Thinking we were communicating, I returned his teeth baring grin to him.

That was a mistake.

[quote]“Is this what you wanted?” I said as I started to drink. Before the liquid hit my lips, the monkeys came after me, this time scurrying and screaming![/quote]

He lashed out at me with his claw. I swung my bare leg out of the way to avoid the strike and out of the corner of my eye, saw another monkey crashing through the bushes on the side of the road charging me. I can’t claim that I got a good look at him, but I was able to gather that he wasn’t as timid or as small as the other. The first monkey was now jumping with delight, knowing reinforcement had come and probably planning his next strike.

Luckily my engine was still on. I twisted the accelerator and fishtailed off, away from the monkeys. My butt was on the seat and I had one hand on the handlebars, but my feet were off the pegs, trailing behind me. The other hand was still clutching a bottle of sunscreen, awkwardly trying to help me steer. Motorcycle safety was a secondary concern for me at that precise moment.

Swerving, I sped away on the bike about 100 feet until I thought I was safe enough from the monkeys to get my driving under control. I stopped, glanced back to make sure that they still weren’t following me. They had stopped on the side of the road, having given up the chase but were staring at me. Both monkeys had their chins up, looking a little too proud at chasing me off.

From the turn of the events and the primal display of violence, I was a bit riled up. I should have been content that my fight-or-flight instincts had delivered me safely out of that situation, but I couldn’t let a couple of monkeys beat me. I figured I was at a safe distance and, being a bit of a smartass, I lifted out the bottle of water from the basket. While watching the both of them, to make sure they saw my actions, I prepared to take a big drag from the bottle of water. “Is this what you wanted?” I said as I started to drink.

Before the liquid hit my lips, the monkeys came after me, this time scurrying and screaming! I threw the bottle of water back in the basket and tore off — not daring to stop. I was terrified by the monkeys and shocked that they knew they were being mocked. Never looking back again, I drove fast until I caught up with my friends. We stopped at the next temple and one of them commented that it looked like I had some sunscreen on my cheek.

“Oh. That was from the monkeys.” I nervously joked as I rubbed at my face. He gave me an odd look and chuckled. It wasn’t until dinner that night, after a beer, that I was calm enough to tell them the story.

Where to Stay in Maui