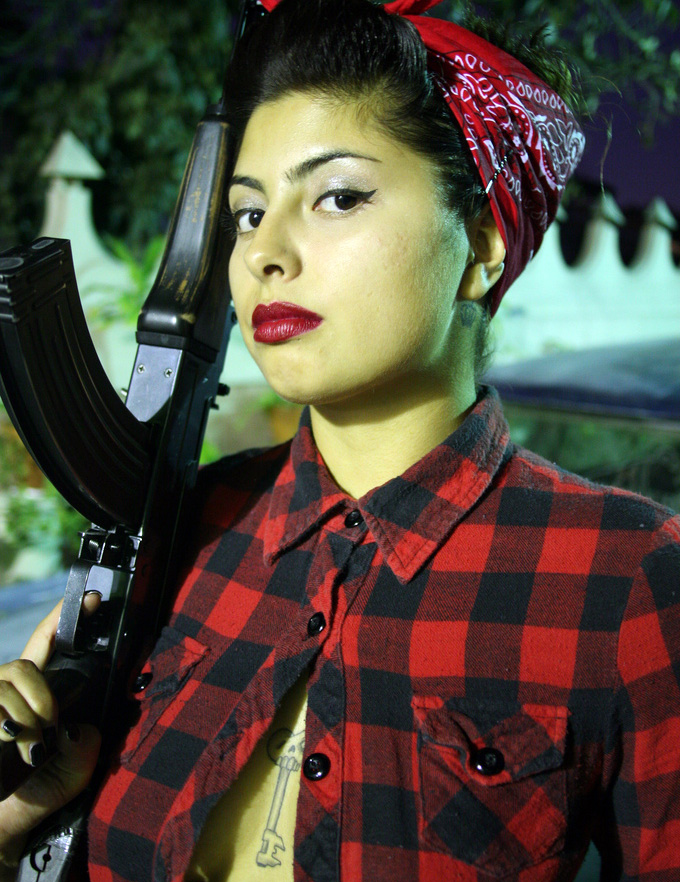 I saw her boobs first. Black round balloons in my face followed by a miniskirt, platform shoes and eventually a face. The hooker looked at me, the purple shirt barely covering her nipples. The queue moved forward. In the reception a pilot casually lounged in a chair, decked out in full uniform, a pressed white shirt and captain’s hat. Beside him a cliché of a drunken detective, tie loose around his neck. He was off to the races. In front of us, two Asian businessmen in immaculate dress holding suit bags checked into the cheapest hotel at LAX.

If I wasn’t in the Hotel California, where was I?

A young black man pushed into the queue just as we were about to check in.

“I live here,” he replied, and then walked off after grabbing a key.

The nonchalant check in staff gave us a key after twenty minutes of waiting.

I booked the hotel over the Internet; it had been marketed as a hostel in the LAX area. My husband and I were flying to Chicago early the next day and we didn’t want to spend too much on accommodation.

The adage you get what you pay for is not always true, but when I felt the first bed bug bite my skin and proceeded to find a small colony lodged in the bed, I knew I should have forked out $20 more for the Holiday Inn.

My logic went thus: we were in Inglewood. Inglewood is dangerous. Our gear might get stolen. We might get shot. I might get an infectious disease from a bed bug.

After a pointed comment to the couldn’t-care-less staff, they changed our room. For the price of one room we got two; two double beds covered in 80s duvets and a bathroom bathed in the green glow of fluorescent light.

Starving for a late lunch, we headed out of the hotel. Strange, there was no one on the street, just a distant man in jeans walking towards the freeway. Broken signs marked the Barber and Beauty Shop across from the hotel. Mel’s Auto in blue and red paint, locked up cars advertising “We serve all makes”. We spotted a decaying group of shops, mostly liquor, in the hope of finding some food.

Behind flapping plastic door strips sat a taco shop, run by a Mexican couple. She brought us the menu; under the pictures of tacos and quesadillas was the address. My husband spotted it first.

“Did you realize we’re in Inglewood?” he asked.

Inglewood? The place where people get killed. Gansta’s Paradise. Where Jules from Pulp Fiction lives. Suddenly my heart was filled with tension. That’s why there wasn’t anyone on the street. That’s why the local businesses all looked abandoned.

The flapping plastic door now felt like an entrance in a Tarantino film. I half expected gangsters to swan in, pants jangling around their waists, guns wedged in their belts. A showdown where we would die.

“The website said LAX area, not Inglewood!” I reply, but my husband’s stomach outweighed any concerns he had about being outdoors in a dangerous suburb.

We ordered a large banana smoothie and tacos. The smoothie arrived, a liter of icy banana in a polystyrene cup. The tacos fresh with the taste of coriander and lime and the tingle of salsa. Pure corn shells with home made guacamole. This was no Taco Bell. We devoured our plates, cleaning each completely, licking pieces of black bean off our fingers.

We scurried across the road back to the hotel, keeping an eye out for hummers with rear-installed machine guns. I lay in bed for an hour contemplating our predicament. My logic went thus: we were in Inglewood. Inglewood is dangerous. Our gear might get stolen. We might get shot. I might get an infectious disease from a bed bug.

There’s a thin line called the freeway that divides the LAX area with Inglewood. Since the 1960s, it has changed from a predominantly white neighborhood to a black and Latino area. It’s the birthplace of Tyra Banks and Brian Wilson. Yet the reputation remains, through films like Boyz n the Hood and Grand Canyon, and the 1992 Inglewood riots after the beating of Rodney King. Although the crime rate is going down, according to City Data the violent crime rate is almost double the national average.

Lying next to the pool reading a book, I almost forgot I was in one of the most dangerous suburbs of Los Angeles. There were other backpackers sitting around, surfing the Internet, eating the free cookies and popcorn on offer. I grabbed a beer to calm my nerves; suddenly life felt better watching the palm trees sway in the sunset skies. After all, isn’t LA famous for dives and broads?

Walking down the alleys of the old hotel, I spotted children’s toys in one room, a mess of Barbies and plush bears. People lived there. Perhaps because it was cheap, maybe because it was safe.

That night, after the beer had worn off, I lay in bed contemplating my own mortality as sirens rushed past our window every five minutes. The sirens acted as a lullaby; my own anxiety forced me to sleep. I woke alive, not shot, not stabbed, not dead and very much wanting to get the heck out of there.

But damn, that was the best taco I had in America.