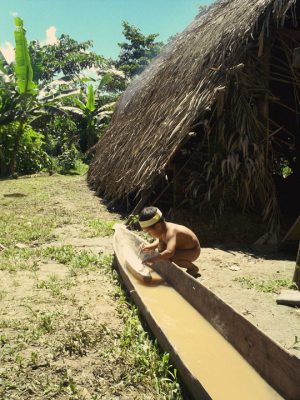 Once landing the tiny Cessna on a grassy run-way, “our” modern world was now their modern world. Very few visages of our world was seen save their clothing and backpacks…but that’s to be expected with a tribe that’s losing their land, culture and way of life because big oil companies are taking their land — they had no other choice to accept the outer world and all it brings (or they can retreat further into the jungle, which a broken sect of the Huaorani’s did. But you wouldn’t want to live with them because you surely would be dead when you finally reached them).

We’re in the jungle, baby! Cars aren’t heard in a distance, airplanes can’t be heard as they land, the hum of electricity is replaced with the serenity of rustling leaves and silence. The sun is brighter and the humidity is quite unbearable but appreciated because it is hot, and dry heat is the worst. A journey into a unison with earth and a connectivity with home. These may sound like flowery words or exhausted platitudes, but there’s a connection with the jungle when you’re living with a group of people that respects and cherishes their home.

For more info on visiting the Huaorani: http://www.huaorani.com/