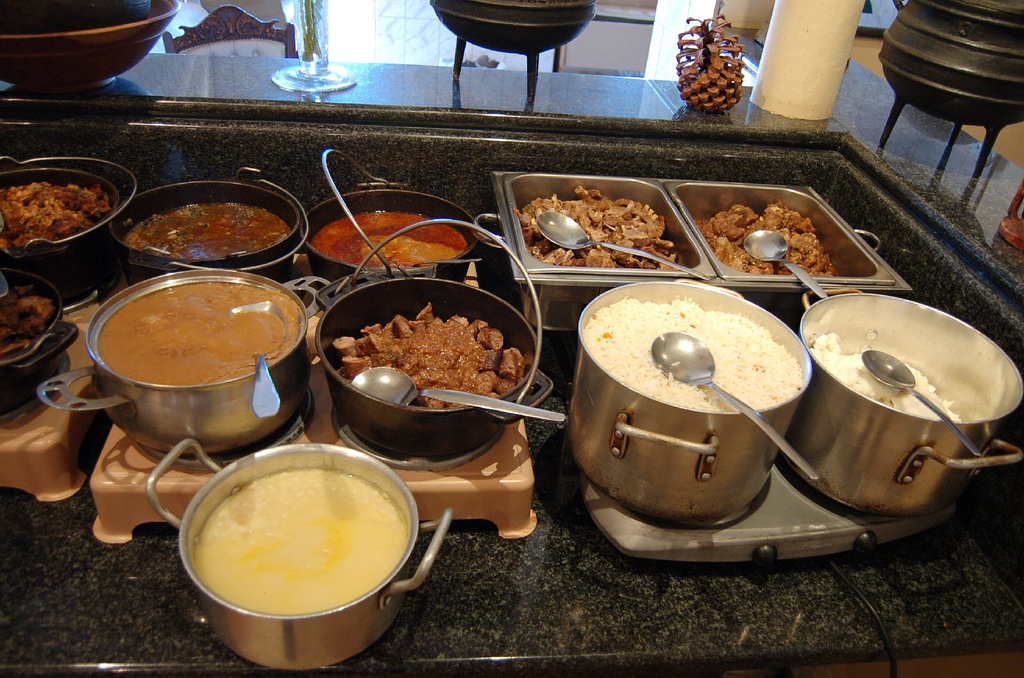 You know the saying that “man cannot live on bread alone”? It doesn’t hold true in Africa. My friend Irena and I have been traveling through Africa on an ambitious journey covering eight countries in three months. Ridiculous you may say? I know…I agree. But that’s what adventures are made of!

[quote]The flavor is bland; no seasoning is used. Think polenta minus pleasure.[/quote]

My attentions, when traveling, are food centric. Rogue salesmen hurtling pitches and schemes my way can’t distract my attention from the street vendor, smooching his lips and sucking air as his come hither call, and his tray of passion fruit and freshly sliced pineapple. I will quickly abort museum ambitions with just a trace whiff of grilled lamb from somewhere down a yet unexplored alleyway. Traveling has become a mission to find the best local food stuffs a city can offer, and right now, after a month and a half of meandering up this hot, lush, often dusty and colorful continent, we have arrived in Dar Es Salaam.

After leaving South Africa, we zigzagged through Mozambique, Zimbabwe and Malawi eating porridge and protein for two out of three meals a day. Because most countries are still classified as “developing,” their diets could be described as “in need of improvement” as well. The main source of calories comes from porridge: cassava or maise. You eat this sometimes sticky, often mushy, mass with your hands. There’s a technique to it of course, and for me, really the only enjoyable reason to eat it. The flavor is bland; no seasoning is used. Think polenta minus pleasure. And then the accompanying meat with soup (sauce) is overly salty. But I persisted, and eventually mastered the one hand, roll the porridge into a ball, dip, and gingerly mash it into your mouth without smearing it on your face technique. But weeks of porridge, and bread, and root vegetables have taken a toll. We’ve been aching for mas sabor por favor! (that would have been my pathetic attempt of using my kitchen Spanish in Mozambique. Aye mami).

[quote]…people have the idea that you go to Africa and come home thin as a rail? That’s completely not true. I’ve eaten every piece of meat from dirty grills, drank borehole water, sipped local liquer out of other people’s cups…and still haven’t had the tiniest tummy rumble.[/quote]

In Malawi, there was this plague-like phenomenon that occured every day. I swear, had it been a few hundred years ago, I would have sworn God had condemned the most gorgeous lake in Africa. The horizon is broken up by huge, towering black clouds that shift along the waters all afternoon. And then the winds pick up and these clouds start moving towards the shore. Before you have time to zip yourself in a tent, or find any other means of protections, millions of lake flies are swarming around you (sometimes in you..think eyes, nose, mouth, ewww) and causing mild chaos. Every day!! And then I come to find out that in a small town, just north of where we were staying, a delicacy is created from these tiny annoyances. A friend described the cake’s texture as reminiscent of gefilte fish with a taste of poo with nuances of garbage. I was intrigued, but unfortunately..or fortunately, I bypassed that city. So, no lake fly cake was to be had, so a grand substitute was in need.

Dar is apparently the answer. We walked around the city and through the main market. The heat is intense…the streets are dusty…and so we had to eat several ice creams yesterday as a means of survival. Aside from the delicious vanilla and chocolate, toffee and of course caramel sensations we inhaled, we juiced pieces of pineapple, watermelon, passion fruit and papaya through our greedy, fruit deprived mouths. Along the path north, we’ve overloaded on mangos and bananas, which isn’t a bad thing, but this city is a refreshing change of flavor. But lush Tanzania has given us reason to fully abuse our spending power–and so we spent fifty cents each on copious amounts of tropical fruit. Aside from the two attempted pickpocketing that happened yesterday, I felt pretty pleased to be shuffling through the crowded streets. The call to prayer wailed over our heads and guys yelled out “mambo sister!” every few minutes as we tried on swathes of gorgeous fabrics in hopes of blending my blonde head into the mass of mostly burkha covered faces. By the end of the day we were content with full bellies and happy hearts. Dar is not only a tasty place, but the people have flavor as well.

The fantastic reason to travel through Africa is the relatively good exchange rate we get as Americans. Thanks to the downturn in our economy, the dollar is surprisingly strong right now. Which means we can buy so much more food…which I guess could eventually be a detriment. You know how people have the idea that you go to Africa and come home thin as a rail? That’s completely not true. Or maybe it’s true for everyone else. I’ve eaten every piece of meat from dirty grills, drank borehole water (don’t mention this to my doctor please!), sipped local liquer out of other people’s cups in Cholera ridden countries (again, I’m wild, what can I say?), and still haven’t had the tiniest tummy rumble. I love it here! I think sometimes people can get too cautious and miss the excitement of the journey. So if I get sick I get sick. As long as I don’t die here, I feel pretty good about my careless decisions thus far. Did I mention I’m going to the hospital today?

So, I am off to Zanzibar tomorrow: the spice island. And plan on filling my nostrils with spicy smells and my tummy with perfumed curries. I think from here on out I have only more interesting food stories to come. Ethiopia and Egypt won’t know what hit them! So for one and a half months more, I will be sampling Africa’s best. But I do have to admit, I miss New York a bit and can hardly wait to reunite with my lovely Seoyoung so we can tear the city apart and I can re-court my true loves: everything Asian cuisine.