Home Travel Tips & Advice On A Budget Life as a StandBy 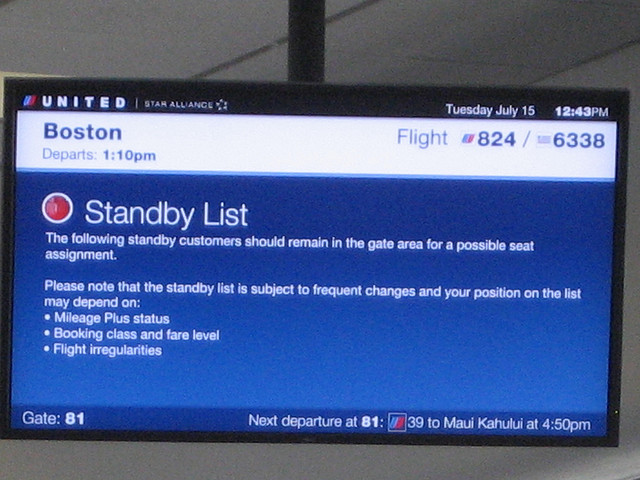 I’m in Sydney, Australia after a month-long backpacking trip and I’m exhausted, looking forward to nothing more than some blissful shut-eye on the long journey back to Los Angeles. My back aches from having 40 pounds strapped to it and I’m thinking it would be divine to check it as luggage and sleep deeply.

I look around, envious of revenue-paying passengers as they happily check their bags and make their way to the terminal. They leisurely stroll through duty-free, perusing cordials and other vices. Meanwhile, I’m staring at the “Cleared Passengers” list, nervously waiting for my name to appear on the screen so that I might get back to the States tomorrow instead of two or three days from now when there’s room for stand-bys.

Time passes slowly and I’m camping out with my backpack, tired and ready to get settled into my little section of plane to endure the 15 hour fly-a-thon over the Pacific. Nothing could be more torturous than a long flight other than not knowing whether or not you should be psyching yourself up for the journey because there might not be room on the flight for you.

It’s 10 minutes before the aircraft door closes and my only chance to get back into the states that day is slowly diminishing. Another airline’s flight to L.A. gets canceled and empty seats on “my flight” are beginning to fill up rapidly. I’m feeling grim about my prospects, until…

There’s my name! The gate agents are nervous, shouting:

“Hurry up! Hurry up! Passports out! Tag your own luggage! Run to the gate because they are closing the doors!”

I’m running through Sydney’s airport and my gate is practically a mile away. I’m bowling over families, zooming through duty-free, choking on fragrances, pushing my way through crowds, until finally, I almost reach the door and –

Another security check. The security officers could care less that the ticket agent is closing the door as we speak. I endure the typical rig moral – passport check, questioning, another round of X-Rays. I’m sweating, strung-out and feeling incredulous. Flying stand-by is testing my last nerve.

I live through the last test of my patience and barely make it onto the plane. The paying passengers look down at me as if to say, “Are you who we’ve all been waiting on? Why are you so late?”

I want to plead with them, “THEY did this to me! I was here 5 hours earlier than any of you!” but instead settle into my middle seat and slip into a coma.

Two months earlier I was working at a waitress in Philadelphia, slinging pancakes and dreaming of a life filled with adventure. I emailed a childhood friend who is a flight attendant and asked her about her travels and expressed my yearning to travel abroad. She told me that she was granted a “buddy pass” through her airline employer to extend to a close friend or family member for 1 year. The buddy pass would allow her choice to enjoy the same flight benefits she received: free domestic flights and entry/exit-fee-only international flights.

After talking with me and realizing how serious I was about traveling internationally, she decided to grant me the buddy pass. I sold all of my belongings, packed what little I had left, cleaned out my savings account and set out for adventure of a lifetime.

The only stipulation to the buddy pass was that all flights were standby only. I flew standby full-time for one year and made my way across the country and world because of my friend’s generous gift.

Travel became something different for me during my tenure as a standby. I learned to embrace the trials and tribulations of traveling and the lessons that came along with it.

First, I became savvy. I had to predict what days to travel on because the more open seats on a flight, the better my chances. Saturdays and Sundays were good. Mondays and Thursdays were murder. I had to keep an open schedule and plan my life around my best chances.

Punctuality was key. I would arrive at the airport early in the morning and try to get on the first flight out. If that was full, I’d hope for the next flight, and so on and so forth. I would secretly hope people were running late or got caught up in security. I hate to say it, but their misfortune was my vacation.

Flying stand-by also gave me an immeasurable amount of patience. I took 32 flights during my time as standby and was only stranded once when I tried traveling two days after Christmas. I got out on a flight on the next day. My longest layover was 12 hours in LAX. It was hell at the time, but I ended up where I needed to go. I just needed to wait a little longer than full paying customers.

As a standby I absolutely respected my role as a passenger. Money talks and revenue and full-paying customers were the first priority. It wasn’t a gate agent’s job to make sure I had a seat. They were concerned with everyone else except stand-bys. I sat in the back and watched the “Cleared Passengers” list like hawk. When my name finally cleared, I would proudly waltz up to the ticket stand and collect my boarding pass as if it was a winning lottery ticket.

I never became irate with any airline worker and I sympathized with them when customers would become angry over matters out of anyone’s control. I harbored an immense respect for airline workers and their ability to accommodate people under highly stressful and ever-changing circumstances.

Traveling standby is certainly stressful and difficult at times, but absolutely humbling, as travel should be. It taught me to be ready and prepared for anything, to be flexible and above all, to be open to any adventure, good or bad, coming my way.

Where To Play Poker in France

Awesome Things to See in Miami