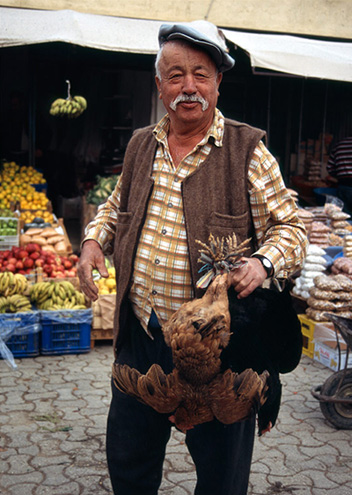 ‘Turkish hospitality is impossible to ignore’, proclaims the in-flight magazine as I fly to Bodrum. You can’t miss it when you set foot in the airport: the welcome visa costs $20. By the exit, the passengers are greeted by a forest of A4 sheets with the names of the people to take to the hotel. It is nice to go to an unknown place, and find somebody waiting for you and calling you by name: in this case, Turkish hospitality will set you back $40. The A4 sheets move, women in uniforms and men sporting three-day old stubble call out names in every language: there is something grotesque and vaguely uncanny about the situation, and I increasingly feel like a mullet among sharks. My shark, however, does not show up. As my flight was due to land at 3 am, I had arranged for a driver to drop me and my luggage at the enticingly-named ‘Hotel Best’; what I had not taken into account was that he might have been having a nap at the time of landing. He finally approaches with messy hair, and accompanies me to the minivan: an 8-seater for just one traveler, and one who is half asleep one at that. My first local conversation partner, Haci, breaks the silence of the overnight ride with a very British few remarks about the weather, but the imported manners soon give way to machismo the Turkish way when, having found out my status as solo female traveler, he points out he is single, and starts inquiring about my salary. Haci has never ventured outside his homeland, but he admits his views are cosmopolitan: ‘I would go abroad on a trip. Well, provided it is no more than a couple of days’. As we speak, he sprays car deodorant: we are driving past a dump and he wants to cover the smell, so I will not get a bad impression of the city. Two sprays to preserve his national pride.

[quote]In Bodrum you can forget you are in a Muslim country: skirts are short, and tourists walk around town in swimming costumes.[/quote]

It is 4 am when I get to the hotel for check-in; a large picture of Atatürk hangs on the walls of the reception as if safeguarding the keys. My room overlooks the main road, where you can hear people singing and mopeds buzzing even at dead of night. It is not the noise of the nightlife that wakes me up, though, but rather the familiar, though long-unheard sound of a cockcrow. After breakfast by the pool, with music from a local TV channel – Britney Spears and Simply Red – blaring in the background, I set off to the centre of town. White houses, scorching sunshine, and a multitude of free roaming chickens. Bodrum boasts 5,000 years of history – a mausoleum, a castle, and an amphitheater still testify to the greatness of ancient Halicarnassus – but for the modern-day tourist, the town mainly means Aegean seaside resort. It is an extremely popular destination for European travelers: I wonder if I am going to be able to find anything authentic, let alone authentic Turkish hospitality.

All the bars and restaurants seem to come with a sea view: I even find a bookstore with a direct exit onto the beach. At the end of Atatürk St. I stop at a fruit market whose colors would have excited Van Gogh: in me they trigger sheer gluttony. A brawny monger hands me a fig, sweet and juicy: for a second I wonder if it is a seduction strategy, but I soon have to disperse my fantasies and realize it is only a marketing one. The fruit reminds me it is lunchtime, and I start having a look at the restaurants: ‘British pub’, ‘Chelsea v. Liverpool tonight’, ‘English breakfast all day!’: it is clear it will be hard to eat Turkish in Bodrum. I end up in a restaurant by the sea, drawn by a flag with a crescent promising local food. I take a seat and ask for water and a menu. How naïve of me! The menu is not held in your hands here. A teenage waiter opens the display case and shows me the fish available. ‘This one’, I say as I point my finger. This one, salad and more bread than I can eat turn out to be a very good choice, all for a very reasonable 16 Turkish lira.

In Bodrum you can forget you are in a Muslim country: skirts are short, and tourists walk around town in swimming costumes. Sure, the locals mention the mosque all the time: with its tall tower, it is an easy point of reference when they give you directions. A multitude of red flags wave on boats, buildings, restaurants, as if to remind that this is Turkey, at least politically not yet a colony of English and German holidaymakers.

As I walk along Atatürk St. on the way to my hotel, I bump into Haci. By day he works at a stool he calls ‘tourist office’: to be fair, it does have a telephone and an array of brochures, invariably faded by the sun; seen as the business is growing, now they even sell international phone cards. By night Haci works as a driver, picking up tourists like me at the airport; on Wednesdays as a guide in Ephesus, on one of the organized tours he sells by day: I am suddenly reminded of how he fell asleep in the minivan the night I landed, only now I am not annoyed by the incident anymore. The tourist office overlooks the street leading to the beach; Haci stands outside and lures tourists in with a smile and a cheesy ‘How are you?’ – the Turkish approach to marketing. Back in my hotel, I am welcomed by a young receptionist: her English is limited, which is why she speaks very little and smiles a lot. The fruit monger, the driver and the receptionist: to me they become three faces of Turkish hospitality. I start to understand why the local Ministry of Tourism has chosen ‘Turkey welcomes you’ as a slogan.

By 5 pm I am in my room, getting ready for that most touristy of pleasures – the beach. This time it isn’t Britney Spears I hear in the background: the mosque is quite far away, but the prayers – almost an amorous lamentation with long-drawn out notes – fill my room as I put on my bikini. On the way to the beach lies the oldest Turkish bath in Bodrum; by the entrance stands a young lady with a headscarf whose English is limited to ‘Turkish bath?’ Seen as I do not proceed to the hamam, she calls the manager to act as an interpreter. The expert linguist is a middle-aged man, short and sweaty, busy with a massage to a greasy client lying on his stomach. The interpreter knows four English words more than the lady at the entrance: ‘35 lira massage, 20 lira Turkish bath’. I like the idea of a massage, but not the sight in front of me, and I leave, beach towel in hand.

All bars in Bodrum offer deck chairs on the beach: 5 yards of pebbles between the tables and the sea. I head to a public beach with no deck chairs and a few dogs. The sea is warm, the sun has stopped scorching, and I feel a little like Venus as I surrender my body to the same water into which the iconic Bodrum castle plunges. The sun is setting over Bodrum, and the town is at its best – like a girl with make up and a nice dress. Unfortunately this is also the time of day when restaurants get busy, the competition among waiters trying to lure you into their venues gets tough and the sound of the waves cannot be heard anymore, covered as it is by techno music from clubs and matches of the English Premier League on TV. I head for a kebab and an Ayran – a yogurt drink which surprisingly manages to be more salty than the lamb it accompanies – and the waiter cheekily asks me the question every solo female traveler expects: ‘Where is your boyfriend?’

A few personal words from the delightful Lorena di Nola, author of Turkey Welcomes You: I was born in the land of pizza, but I am hopeless at making my own. I studied English and Russian literature – Privet, tovarischi! – and went on to earn my multi-seeded bread by working in the translation industry in London. Friends have always dreaded my return after a holiday: marathon-long story-telling and photo-viewing sessions awaited them. I have been in a snowstorm in St. Petersburg and crossed the Nevada desert with a dangerously empty petrol tank; I have washed my hands in the marble bathroom on the top floor of the Twin Towers and made them pitch-black in mud baths in Turkey. My wardrobe has a shelf for veils and cymbals – belly dance is what I do on Monday nights. And Tuesdays. And some Saturdays at special workshops. My pieces on how to shake your way around the world have featured in Mosaic magazine and on the Go Nomad and Go Wander websites. I also write for the website ‘Italians of London’, and have recently returned from a travel writing assignment for the British national paper The Independent on beer culture around Europe. Somewhat surprisingly, I made it home without a beer belly.