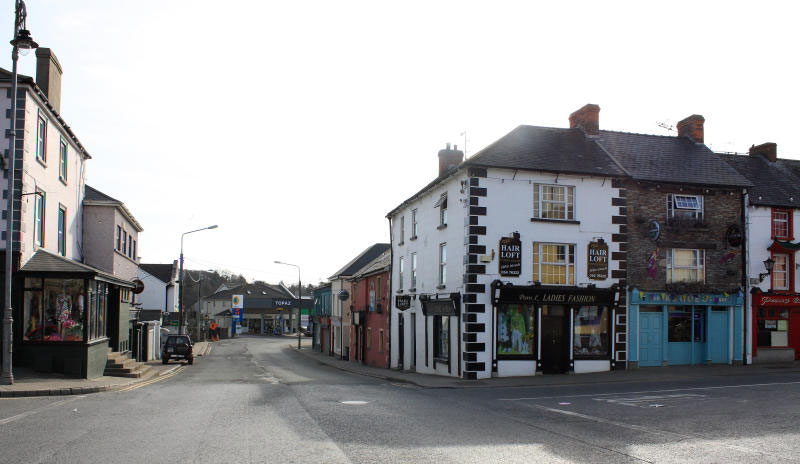 Before leaving for my European odyssey, I called the only connection I knew in Bunclody: Redmond’s Pub. The woman that answered in that oh-so-familiar lilt was puzzled. It isn’t every day they get a call from Canada. I told her that I would be visiting Ireland, looking for family, and I knew I was somehow related to the Redmonds. She had the answer.

“When you get here come by the pub.” Right.

I arrived in the town of Bunclody after dark and walked to my B&B in a stone cottage. Immediately upon arrival, I locked myself into the bathroom with a skeleton key. Once freed, I steeled myself to what was coming. I had traveled the last two months alone across Europe, but the idea of meeting a bunch of strangers – who happened to be related – made me very, very nervous.

I walked into the pub, finding several surly-looking men staring in my direction. I sat at the end of the bar and ordered my favorite ice-breaker: a pint of Guinness. As the black stuff began to flow, so did the conversation. The men were curious and friendly, and played a lively game of guessing my relations after I mentioned my Doyle roots. As I would continuously find in Ireland, I didn’t have to buy my second drink. After a good chat, we didn’t come to any conclusions, but then the bar woman had another answer.

“Come back tomorrow and you can meet the Redmonds.” She really was the vague sort.

After a very full Irish breakfast, I allayed my anxieties and put off my visit by browsing the town. Bunclody, at the bottom (“bun” in Irish) of the River Clody – and the beginning of the River Slaney – was, to my Canadian eyes, the quintessential Irish town. The population of just over two thousand has everything they need in their two main streets – including eight pubs and, oddly, four Chinese restaurants. Cows graze near the confluence of the rivers, churches dot the area, and a GAA (AKA Irish Football for non-Emerald Isle readers) pitch is around the corner.

I finally returned to the pub, and was immediately invited to the apartment in back and offered tea and cookies by the elderly Redmonds. I discovered that even the pub itself is part of my history – it was The Merchant Doyle’s when it belonged to my great-great grandfather. He passed it to his daughter who married a Redmond. After chatting, one of their children drove me out to the country to meet “the other side” of the family.

We stopped at a bungalow perched on an expansive sheep farm. I was once again greeted with open arms, tea, and cookies. My sheep farming relative took time out of his schedule to escort me around town, but kept asking if I was really interested in learning the family history. As one of my ‘cousins’ had put it, “It’s only the families that immigrated to the US or Canada that need to come find their roots – the ones in Ireland are still trying to get away from their relatives!”

But he had no reason to fret. Besides being a guidebook freak and a history nerd, I wanted to learn about where my family had been. I was entirely delighted to see things like my great-great-great grandfather’s grave-site and farmhouse (still in use), which was probably used by even earlier generations. In my own, relatively new country, it would be a shock to find those deep roots. But in Ireland it’s old hat. And tea and cookies are always available to family.

Seven Reasons Why Tenerife Needs to Be Your Next Vacation Destination