Home North America Canada The Grace of Stones: Dancing on a Rock Face in Luskville, Quebec 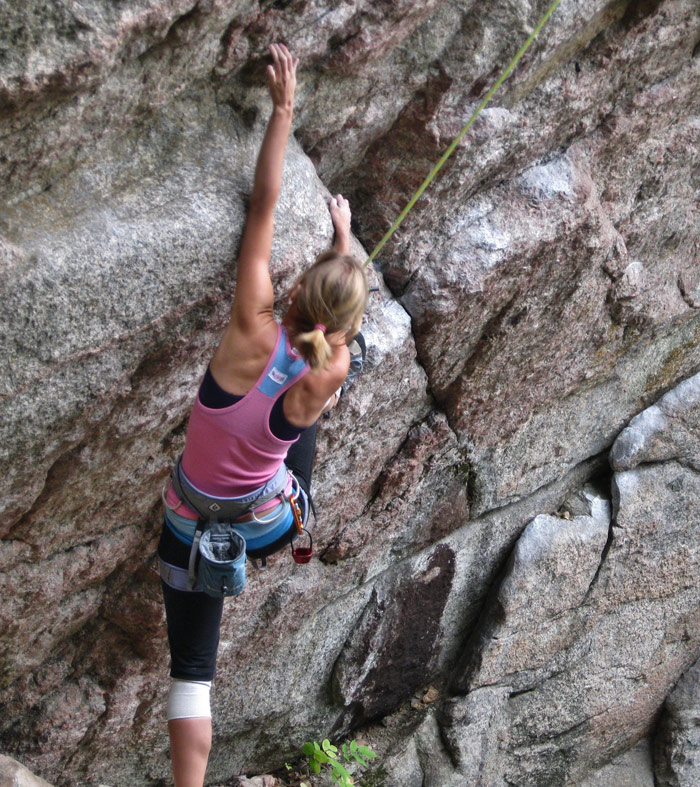 My friend Sasha likes to paint stones. She collects them from a narrow dust road that leads to her apartment building. Among the towering concrete structures, asphalt roads and cracked pavements of Sasha’s neighborhood , the dirt path stands out like a stream in a desert that refuses to dry up. Sometimes, she finds stones on one of the city’s markets. There, squeezed between a 300-year old city hall, a Franciscan church and trendy cafes, the market’s beautifully carved stalls boast ornately stitched tablecloths, handmade wooden toys, plastic souvenirs made in China, paintings of the city’s landmarks and plain stones that range in size from tiny slivers to palm-sized cobbles.

My friend Sasha likes to paint these stones.  With extraordinary skill, she flips pebbles between her middle finger and thumb, covering their slightly rigged surface with abstract images. She never gets any paint on her hands.

My friend Sasha likes to paint stones. I like to climb them.

The tips of my fingers tingle as I size up the ragged crevices and sharp protrusions above me. I am aware of the weight of my harness resting on my hips and I push it down several times, satisfied with its stubborn rigidness.

I throw a flat rock into the dust of a narrow side road and inhale deeply. Among the dust particles I taste on the back of my tongue, there is a distinct flavour of upcoming adventure.  The flavour intensifies as I lift my head toward a small hill covered with dense oak trees. From experience, I know those trees conceal muddy trails, prickly bushes, sharp stones and voracious mosquitoes. Parts of grey limestone are visible among the tree tops in the upper section of the hill. At the sight, my adventure radar beeps joyfully.

Slamming of car doors and shuffling of several pairs of feet stir me from my musing. A number of young muscular backs bend briefly under the weight of backpacks adorned with climbing ropes, karabiners, quickdraws and slings. A pair of hands grabs a large blue bouldering mat, and six faces turn toward the oak hill with exposed rock face. An array of emotions mirrors in these faces – from joy to impatience to slight unease.

Our group consists of six rock climbers, ranging in skill from novices to experienced lead climbers.  We are located some 30km northwest of Ottawa, in an area called Luskville. It is a community of a few dwellings, a gas station and a shabby mini-mall, all dispersed along Highway 148 amidst grassy fields and rolling hills of the Ottawa valley.  Luskville is well-known among Ottawa’s climbers.  The area houses a few fine climbing spots frequented by sport and lead climbers as well as free soloists and occasional hikers. Just like obscure labels of Luskville’s climbing routes– “Death by Maboola,” “Ethics Police” or “Your Wife” – the names of climbing sections are somewhat baffling, at times explicable, and often an inside joke.  Today, we are headed to the “Eastern Block” and “DownUnder.”

I smirk as I think of the “Eastern Block”, developed by a Slovak rock climber who had spent years in the original Eastern Bloc. I sense an inside joke, although I can’t quite put a finger on it. I also feel a sting of nostalgic affiliation to another immigrant soul who shares my old as well as new world. I keep smiling to myself, as our group sets off toward the forest, leaving the prints of five pairs of sneakers and one pair of feet in the dirt of the path. The sight of a large-size male foot slows my pace.

“Hey J.!” I yell once I identify the originator of the footprints.

He turns around and pauses, pulling on the blue straps of his backpack as he waits for me to catch up. When I do, I look down at his bare feet, now covered with fine dust from the road.

“Why?” I shake my head and nod toward his tanned toes. “Why are you hiking barefoot?”

He shrugs with a casual ease, the kind of indifference that tends to stir in my mind images of flowy dresses and Scooby vans.

“I like it better that way,” he replies with a nonchalant smile.

I glance at his feet again, eyebrows raised. An image, likely acquired from some National Geographic documentary, darts through my mind. In a slow motion, my brain replays a visual of Mexican long distance runners who – without any apparent harm – wear no shoes through the rugged mountains of Sierra Madre Occidental.  I nod to myself. Maybe the whole shoe industry is a colossal scam.

J. is back with the group now, and I hurry to close up the growing gap between us.  Soon, the dusty road turns into muddy forest trail, dotted with small sharp cobbles and prickly plants. J. steps down carelessly. Sometimes he is ahead of us, sometimes he lags behind. His lack of footwear doesn’t seem to bother him at all. Just like the rest of us, he climbs over fallen tree trunks, jumps over mud puddles, and swallows tiny flies that are persistently swarming around our heads.

J.’s exposed feet fare startlingly well in the last portion of our hike where a massive carpet of limestone separates the rock face from the forest.  His bare feet seem to stick to the smooth stone better than our shoes, allowing him to ignore a thick yet well-used climbing rope someone has left hanging there to aid the ascent. It is a prelude to what’s awaiting us ahead.

For me, rock climbing is an addiction to an overwhelming feeling of rapid satisfaction, attainable over and over again until a climb is finished. When I lock my eyes with the cold, firm stare of the rock face in front of me, I feel a familiar sting of unease that immediately blends into exhilaration. The tips of my fingers tingle as I size up the ragged crevices and sharp protrusions above me. I am aware of the weight of my harness resting on my hips and I push it down several times, satisfied with its stubborn rigidness.  One end of a thick orange rope is dangling by my feet and my eyes follow its length upward before I reach up and begin my ascent.

My body leans into the rock, pushing into its crevices. My thigh muscles tense and stretch as I push up, grazing the rock’s rigid surface with my fingertips. This is the only time in my life I feel like I possess the flexibility and grace of professional dancers. I reach up and push and lean, performing an elegant rock dance, breathing dust, eating dirt, smelling wet soil, scratching skin off of my fingers, bruising knees, stretching muscles until they scream and seize up, clenching fingers in a grip that I can’t loosen even if I wanted to.

We spend hours at the “Eastern Block” and “DownUnder”, alternately braving the limestone crevices and sitting on abundant boulders that are lodged in the clayey soil. When stationary, we keep straining our necks looking upward, listening to the soft sounds of J.’s ukulele. At the time when the mosquitoes seem at their hungriest, we pack our equipment, clean the site and begin our descent. Just past the carpet of limestone, we encounter two hikers, a middle-aged man and woman, their relationship given away by matching outdoor outfits.  As we pass them with a friendly wave, I see them pause and observe us in silence. Then I hear an amused male voice with a discernible accent: “Nora, you can delete all those pictures of footprints. There’s no Sasquatch here.”