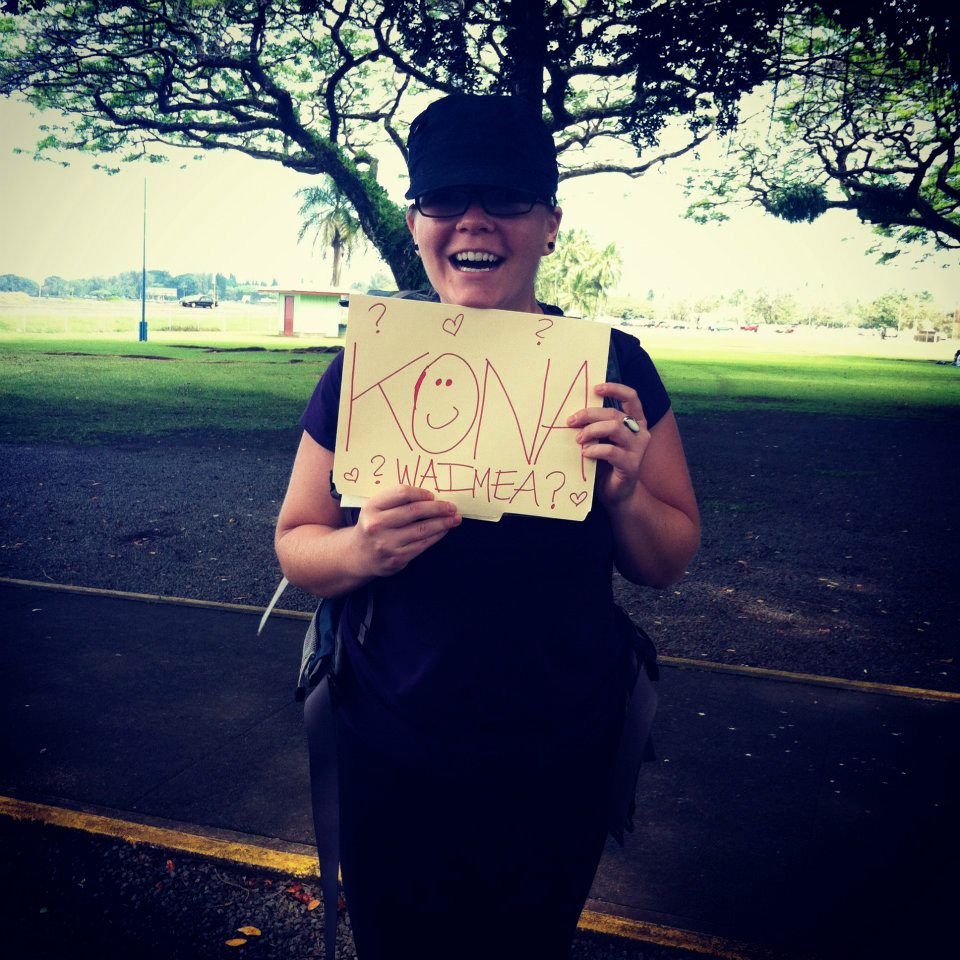 It wasn’t until I was lying on the cold, hard sand while an army of cockroaches made my makeshift bed their nest that I even realized how lost we really were.

“We made it this far,” I offered myself. But those brown little pests kept crawling, and I just shut my eyes, waiting to be rescued by the rest of our group.

Nightfall was certainly upon us and there was no foraging through the impossibly difficult lava fields to find the rest of our camp, once seven strong, now diminished to three lone survivors.

The day had started innocently enough on the east coast of the Big Island of Hawaii. Myself and six other volunteers at an eco-sustainable hostel had just been released of our duties on Friday afternoon and were seeking adventure in the rawest form. Equipped with little else other than a few jugs of water, some hummus, a bathing suit and towel, and a half-brained scheme involving camping and living off the land, we were off to hitch-hike across the island to camp for the weekend. 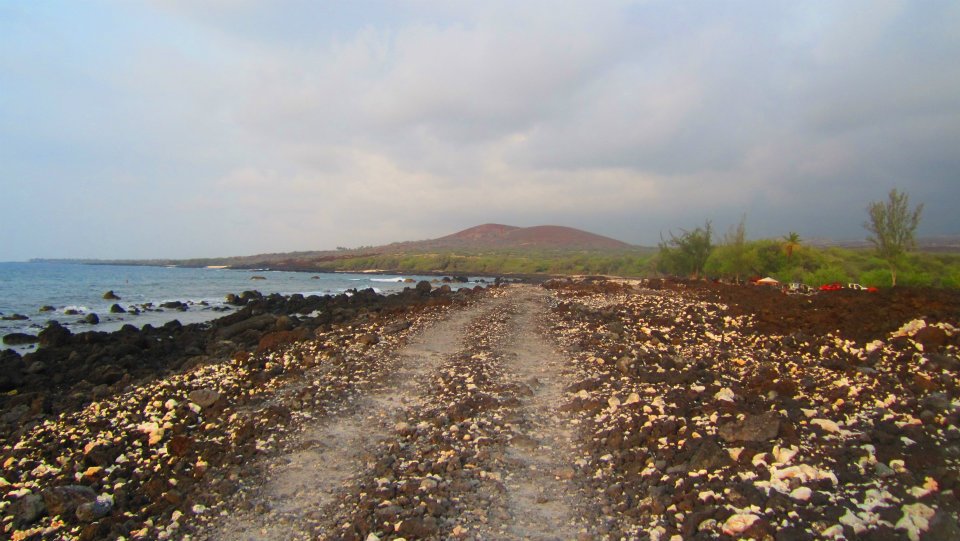 “This is the most amazing beach on this island,” Cassondra, the wild and fun-loving Canadian told us the week before, just having had returned from the Kona side. “We have to go there!”

We split up just outside of Pahoa, a small, hippie town on the east coast of Hawaii, the group of four carrying some deflated airbeds, our group of three the mattress pump. It was simple: we would meet them down at the beach, join forces, and make camp.

Making a day of hitch-hiking from one side of the island to the other was the easy part. A normally 2-and-a-half-hour drive was turned into a seven hour, nine ride pilgrimage. We were hell bent on making it 90 miles and finding the beach before sundown.

We rode in a strange configuration the entire day. Marjie, a friend visiting from home who had only arrived the day before was playfully cursing me for taking her on a suicide mission. Christian, a strong-minded and clever Austrian tourist was game for just about anything. As we toted our backpacks and water jugs with us, we were painfully aware that at any point we could be stranded. Ignoring this, we rode on wheel wells in the back of open pick-up trucks through the most verdant green valleys, hitched a ride in someone’s truck whose engine was overheating and even sat on a flatbed carrying a mound of dirt, nothing between us and the rolling, black pavement. 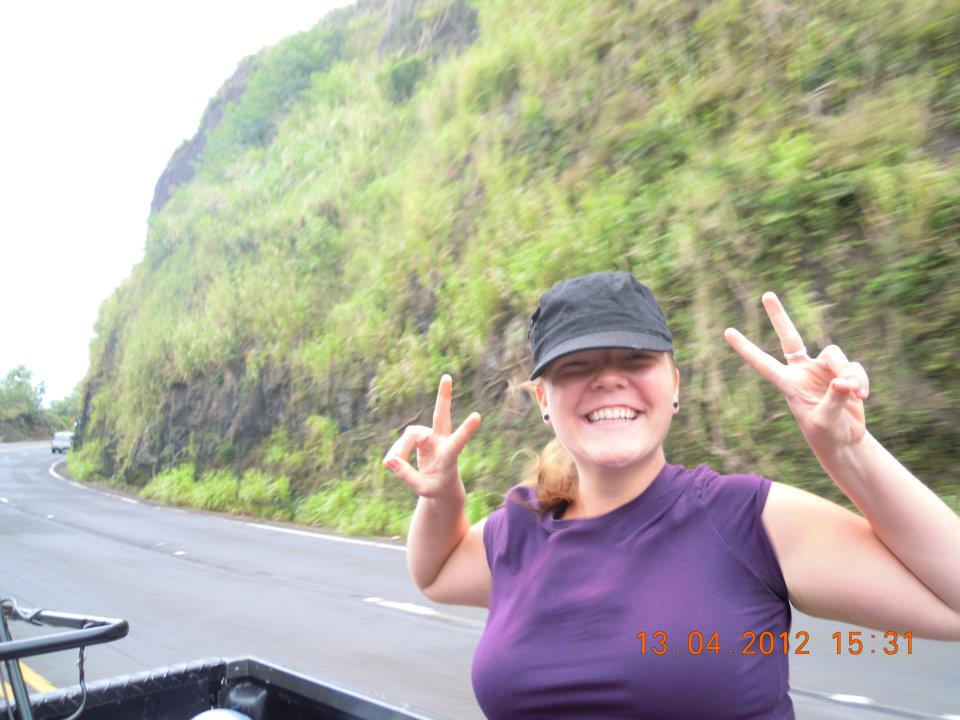 It wasn’t until our ninth hitch that even knew how to properly pronounce the name of the beach we were headed for. Rides came few and far between on the Kona side of the island, as it’s full of tourists in “too-new” cars, drivers unaware of the legality of hitch-hiking in Hawaii. Finally, on our ninth and final ride, Trevor, a ukulele teacher in Kona, gave us a better sense of direction.

“You’re going to Makalewena? I love that little spot. If I didn’t have to work tomorrow, I’d come down and camp with you,” he said.

Trevor dropped us at the edge of Route 19.

“Follow the path down and take the fork to the left,” Trevor advised. “You’ll come to a point in the lava field where it looks like you’re supposed to take a right down to the water. Go the opposite way and hike for about 15 more minutes and you’ll make it.”

The sun was a soft reddish orange as it dipped into the horizon. We had about 30 good minutes of sunlight to hike down and make camp until the others from our group joined us.

What happened next was an exercise of futility. As the path wound down toward the beach, it snaked to and fro, making it unclear when our sharp left turn would be. Instead, we took every left we came to, figuring we were heading in the right direction. 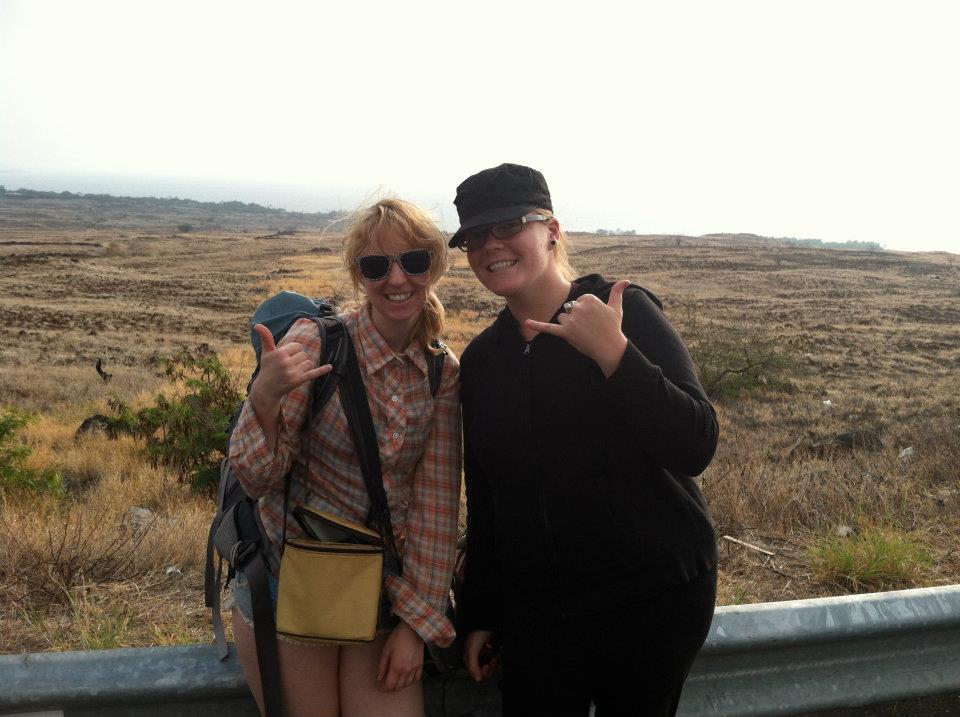 Finally, it was dark. My flashlight was about as useful as our dim-witted plan and I struggled to gain my footing in the unforgiving, sharp lava rock. More than once I lagged behind, exhausted and slowed by the treacherous terrain.

Finally, around 8:30 p.m. we found a stretch of beach, assuming that it was the pristine, best-spot-on-the-island Makalewena that so many had gloated about.

We sat around the fire, trying to figure out where we were when the sheer exhaustion of our hitch-hiking adventure hit us.

We curled up on our towels beside the fire, watching the stars, swatting away cockroaches, waiting for the next sign. Marjie and Chris fell into a light slumber, and I lay awake, utterly befuddled at the fact that this was the most beautiful spot on the island. How could it be? It was cold, dark, scary and infested with pests. 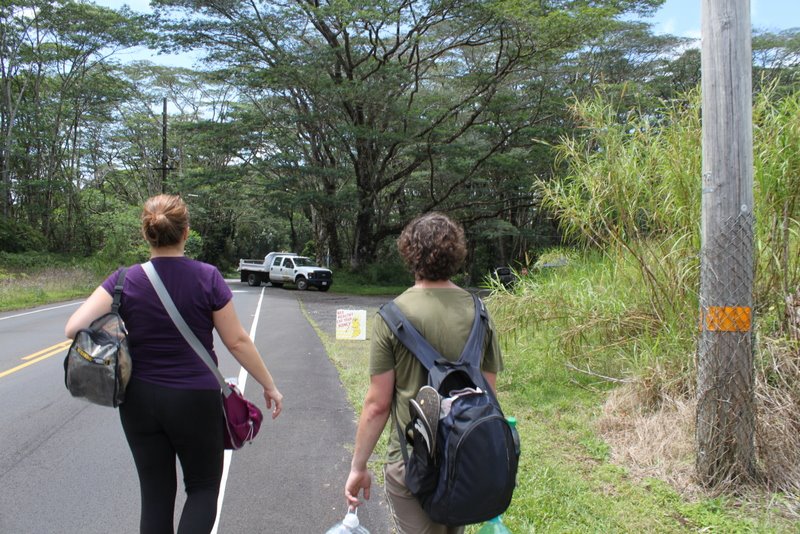 Around 11 p.m. my cell phone rang. I was jolted out of my half-sleep, suspicious. My cell phone hadn’t had reception the better part of the day, but I was joyous to see our crew leader Brandon’s name light up the screen.

“Try to explain where you are,” Brandon said. “We’re at Makalewena and made camp, but we should find each other so we can blow up the air mattresses and rest easy tonight.”

I tried recalculating my steps. I sounded like a crazy person as I recited the labyrinth we followed to arrive at our remote stretch of beach.

“We hiked down the dirt path, taking every left we could and eventually came to an arrow spray-painted on a rock pointing right down to the beach…,” I started.

It was then I realized our mistake. 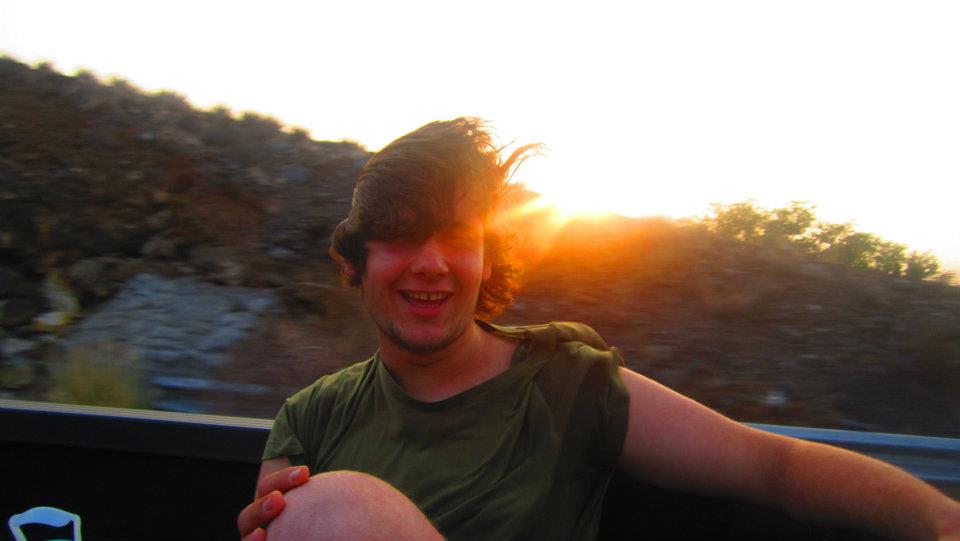 Brandon and Cassondra followed our contrived path for the better part of two hours in the dark lava fields. As I lay on the beach, I finally saw the glimmer of two headlamps in the distance.

I woke up Marjie and Chris.

We hiked back to their camp, about 50 minutes away from where we were. More than once we had to pause to pull sharp, thorny kiawe from our sandals, but we forged through. 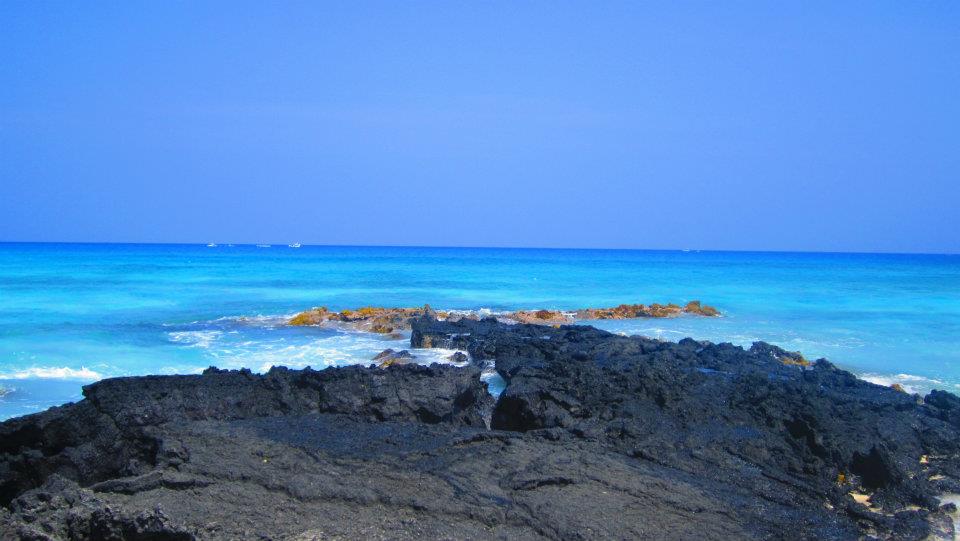 Finally, at 1:30 a.m. we stumbled into the real Makalewena. I nearly kissed the ground.

Under the moon and stars’ light, we crawled into bed side-by-side, cozied and comforted that we were all finally together. Bruised egos and busted up feet, we slept seven strong to the safe sound of the Pacific crashing against the shore.