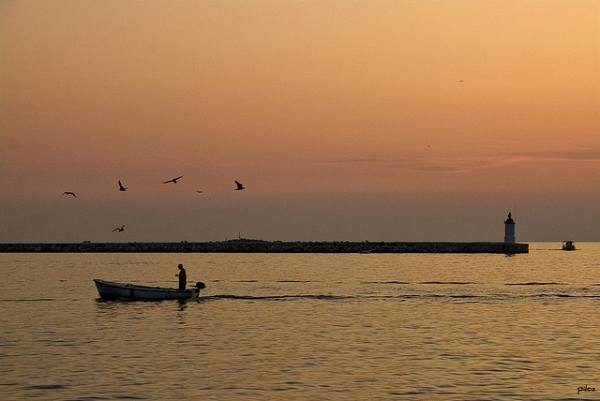 You may think this picturesque water-scape photo is off the coast of Italy or South of France – its quintessential fisherman setting has been used numerous times to capture the coastal Romance language nations. But other countries share the same rustic, quaint pictorial and serene sunsets sans the romantic language – this one being Croatia.

This shot was taken in Porec. A small coastal city known for it’s marble sidewalks (which will make you feel like you should be wearing sandals and have a sheet draped across you), breathtaking coast, and its 2,000 years of history.

You’ll find after running around the city: sightseeing, eating, shopping, or getting culturally infused that this taken-for-granted display of the setting sun and the laborious fisherman will soothe feet, soul and mind – energizing you for the night’s festivities!

Which is one of those things that you must do – party in Porec! I remember being driven by two girls that we met at a local bar, who spoke little English and a lot of Croatian to us, that it almost felt like we were being sequestered to a remote place to be robbed. All that we saw were the trees being lit by the car’s headlights as we swerved and swerved further into a forest. Then finally a clearing unfolds. We park. And find ourselves in one of the neatest outdoor nightclubs we have seen in Europe.

Torn Away In a Second, Rome, Italy