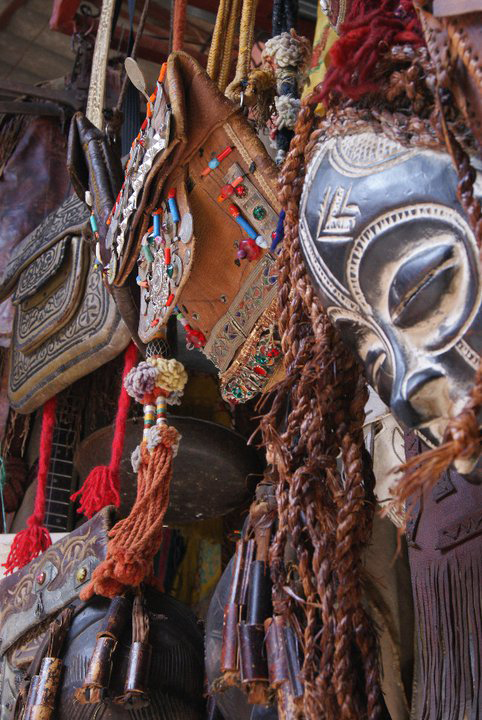 Business has boomed since the arrival of Western visitors, with markets and stalls around every corner. During trade hours there is never a quiet moment without a shopkeeper encouraging you to spend, a man with a donkey shuffling along and trying to get around you, or a moped beeping it’s horn.

It becomes overwhelming because so much is packed into its tiny streets. Marrakech is not Morocco‘s largest city, with Casablanca and Rabat included in it’s bigger brothers. In fact, in comparison to most cities we know, it is miniscule. The cramped little shops, deeper than they are wider with more trinkets and treasures in than you can imagine, are certainly not built for gentle perusal.

One of the main attractions of Marrakech are the souks, otherwise known as markets in which you can buy all manner of things. There is one aspect of these markets which make them stand out from any that we might be familiar with; be prepared to haggle like never before.

The real secret to haggling is to pretend like you don’t really want the object you show interest in (which in itself to me seems utterly ridiculous; I am terrible at haggling). However, it works like a charm. As soon as they see the little glint of disinterest in your eye, the shopkeepers instantly consider lowering their price at the thought of losing one dirham of business.

If you know you’re not a fan of arguing with strangers over the price of things (on a mostly friendly basis you must understand) then I suggest you go to Marrakech with someone who does, otherwise you’ll end up being seriously out of pocket. It’s all about a competition of wills, and yours has to come out on top. This theatre performance whilst shopping is yet another reason for Marrakech’s madness, and one that can be enjoyed more and more with practice.

As well as the shopping, Marrakech, and the whole of Morocco in fact, is renowned for it’s cuisine. Indulging in a ridiculous amount of food is one of those fantastic charms about being on holiday, and it is safe to say that we were not left disappointed.

Marrakech in particular has some fantastic street markets to eat in at night. It is a completely unique experience, even before you sit down to eat. You take one step in and there are dozens of men either side of you trying to rope you in to eat at your restaurant. Once they worked out we are English, they exploded with any quote from a British television show that they can think of, the favourites usually being Little Britain or ‘Lovely jubly!’, probably Jamie Oliver’s influence when he came to Marrakech to experiment with the food.

The markets illustrate the chaos that thrives in the evenings in Marrakech. As overwhelming as it can be, it is a great experience and I encourage anyone to just dive in and enjoy. As long as you don’t mind being called ‘the only gay in the village’, you’ll survive. From then on, once you’ve decided on a place to eat, you are showered with little plates of heaven. And beautifully cheap plates of heaven at that.

Of course, there are downfalls that come with any busy tourist spot. When you hear the word city, a sense of danger pops into your head, especially when visiting a city in a foreign country. Hustle and bustle brings along with it pick-pocketers, scams and swindles. Due to the fact that Marrakech is all terracotta, it is easy to get lost and disorientated, and at night, if you don’t know where you are and by yourself, it can become a scary place.

This underlying sense of danger adds to the whirlwind atmosphere that business, shopping and food markets provide on the surface. It occurred to me however that it only becomes threatening as an outsider. As British people we immediately stand out to the locals as foreign, on holiday and with money to spend, so we become the targets.

For the people who actually live in Marrakech however, it is another case. For a place that is considered a city, there is a very strong sense of community. Around every corner there seemed to be children playing out on the street with no sign of parents or guardians watching over them.

This was something that struck a few members of our group, as we all thought it was a shame that such a thing does not happen where we live anymore. With stories hitting the papers every so often about missing children, stories which the public hold onto for years to come, the simple charm of children just being allowed to play unattended in the surroundings of their homes is tainted and becomes more and more scarce. Groups of children who do this in cities become labelled gangs, loitering in dodgy areas and are often linked to violence.

Whilst I’m sure this does happen on occasion in Marrakech, it still seemed like a much safer environment for children to play in. It felt like the whole community was looking out for the people around them, possibly due Marrakech being more religiously grounded than our society, in that they are almost exclusively Muslim.

As well as freedom and safety, another factor that adds to their community is the trade. Many of the souvenirs you can pick up are made in the markets before your very eyes. There are stacks of leather waiting to be made into intricate bags and slippers, and carpenters making exquisite chess sets in a matter of minutes. This is truly honest trade; made in the community and making money for the community.

These people eat together, munching away on the food from vendors on the street. They pray together five times a day; an official blasting out the call to prayer on the speaker system of every mosque. Groups of men on rows of tables playing cards in the street instead of some smoke-filled seedy bar above a kebab shop. Despite the intense competition, the shopkeepers all sit outside their shops together, indulging in some friendly banter whilst they trade.

It has to be said that the essence of Marrakech must be that chaos that you either love or hate. Even though the place seems so intense and crazy, somehow it’s held together so beautifully and it just works. The city delights each and every one of your senses. Smells of spices, metal, leather, chocolate and oils creep into your nostrils at any given moment, along with sewage, which nips in from time to time. The vivid and bright colours make it hard for the eyes to focus on any one thing at a time. Shouts, beeps, hoots and clucks flood your ears.

One anecdote that I think illustrates this perfectly is a tale of one very brave man in a wheelchair. We were headed towards some gardens outside of the main central tourist area, which meant crossing a series of busy roads. Coming across a large roundabout, with enough space for three lanes surrounding it, we spotted something trying to cut straight through the middle. As it turns out, this was a man very slowly wheeling his way into extremely busy oncoming traffic in order to cross to the other side. At this point, we all just had to stop and stare, transfixed by the bravest human being we had ever witnessed. I’m pleased to say he made it, but not without a few honks and cars swerving their way around him at terrifying speeds. I would have to say there is something charming about his courage, even though I think most of you would agree it was an utterly ridiculous idea. This madness is the real Marrakech.